On Tuesday, March 3, 2015, voters in Council District 14 will get to decide who will represent their district. Please join us at one of two candidate forums in Council District 14 to hear from candidates as they share their vision and position on issues to best meet the needs of the district. The Downtown Los Angeles Candidate Forum on February 11th will focus on Downtown issues. The Northeast Los Angeles Town Hall and Debate on February 12th will focus on neighborhood issues. You are invited to choose to attend either forum or both forums.

Dunia Elvir, host of Noticiero at Telemundo 52, will serve as moderator for the Northeast Los Angeles Town Hall and Debate on February 12th. 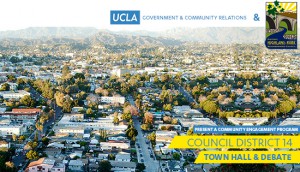 In anticipation of the 2015 election for City Council District 14, UCLA Government & Community Relations is proposing to host two Candidate Forums, bringing together the certified candidates to publicly discuss issues of importance to constituents and stakeholders in the district. The election for this seat is a contest where incumbent Councilmember José Huizar is being challenged by Mario Chavez, Nadine Momoyo Diaz, Gloria Molina, and John O’Neill.

Council District 14 encompasses the northeast and eastern-most areas of the City of Los Angeles and includes parts or all of the following neighborhoods: Downtown, Boyle Heights, Eagle Rock, El Sereno, Garvanza, Glassell Park, Lincoln Heights, and Monterey Hills. These communities comprise 23 square miles with an approximate population of 233,000.