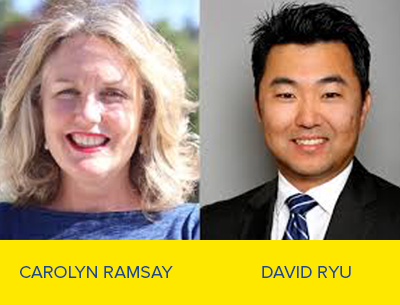 Who Will Be Your Next City Councilmember?

The race to elect the next Los Angeles City Councilmember for the Fourth District is entering into the final stretch. As Election Day nears, two candidates, Carolyn Ramsay and David Ryu vie to succeed Councilmember Tom LaBonge, who has represented the district since 2001. The array of issues of concern to district residents include traffic congestion, development, public safety, open space, and more.

UCLA, the Hollywood Hills West Neighborhood Council (HHWNC), and surrounding neighborhood councils invite you to attend the Los Angeles City Council District Four Runoff Forum on Thursday, April 30, 2015 at 7:00 p.m. Learn about the candidates and their positions on the issues that matter. 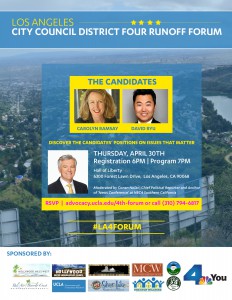 In the primary election less than 10 percent of eligible voters participated, making this the lowest voter turnout since 2003. As civically minded Angelenos, come get informed to select a candidate who will help shape the policy and direction of the nation’s second largest city.

Additional voter information can be found on the Los Angeles City Clerk’s Office.

Continue the event conversation online by using the hashtag #LA4Forum