The Census is a constitutionally-mandated survey taken every 10 years by each person living in the U.S. One Census form must be filled out by each household and asks each person’s name, age, birth, race, ethnicity, sex, the number of people in the household (including non-family members), and each person’s relationship to the person filling out the form. The 2020 Census can be taken at 2020census.gov in just a few minutes. 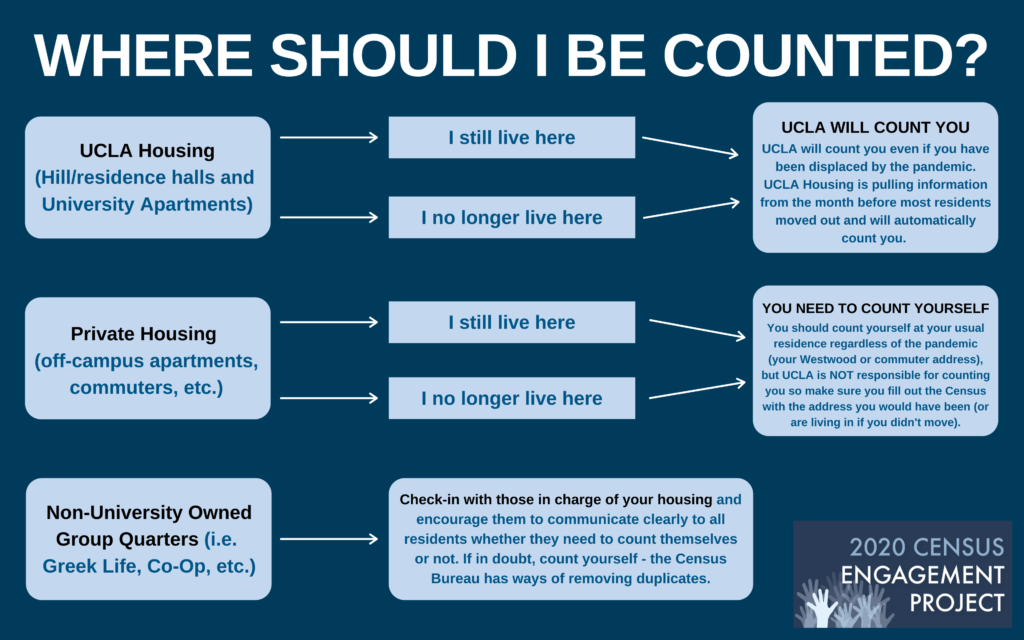 Students that normally live at or near UCLA should be counted in Westwood, even if you are temporarily living somewhere else due to the COVID-19 pandemic. If you lived in university-owned housing, such as on the Hill (in the residence halls) or in the University Apartments, UCLA Housing will automatically count you on the Census, and you do not need to fill it out yourself.

However, if you normally live in a non-university owned apartment, make sure you fill out the Census using this address you would have been living in, even if you were displaced as a result of the pandemic. If you have roommates, please ensure to fill out one Census form per household (one person can fill it out for your entire apartment).

Not sure if your apartment-mates have already responded? Fill it out anyway! The Census Bureau has ways to eliminate duplicate responses, and it’s better to ensure you’re counted in, rather than being excluded entirely. It’s important to be counted at your regular address regardless of displacement as a result of the pandemic, because Census data dictates the allocation of billions of dollars in federal funding for the next decade, including for safety, mental health services, and financial aid grants.

Why the Census Matters

California is the hardest-to-count state, and Los Angeles County is the hardest-to-count county in California. This means that it is difficult to obtain an inclusive, accurate count of every person who lives in our area. Without an accurate count on the 2020 Census, we lose funding for campus resources, political representation, and data that can be used to protect marginalized communities. Some hard-to-count populations include college students, racial and ethnic minorities, non-English speakers, low-income persons, persons experiencing homelessness, undocumented immigrants, LGBTQ+ individuals, and people with disabilities.

“Hard-to-count” status does not mean we should stop trying to count these communities, but rather that we as a campus community must make sure that our most vulnerable campus communities are counted, as they need these resources the most.

Only aggregate-level (not personally identifiable) data from the Census responses is released to other government institutions and outside organizations. Under Title 13 of the U.S. Code, no Census Bureau employee can release any private information, and there are penalties (including a $250,000 fine and/or up to 5 years in prison) for any breach of this confidentiality.

Your personal information as provided on the Census cannot and will not be used against you in any way. For example, if you live in an apartment with greater than the maximum number of people as dictated by your lease, your landlord will not be notified about the size of your particular household. In addition, no court, no law enforcement, and no federal agency outside the Census Bureau–including the Federal Bureau of Investigation (FBI), the Central Intelligence Agency (CIA), U.S. Immigration and Customs Enforcement (ICE)–will have access to your personal data.

Along with Title 13, there are community organizations, activists, and legal groups all working to ensure that your information is safe and secure.

The Census website and data collection servers are encrypted with technological safeguards, which are monitored by IT specialists who are dedicated to cybersecurity. Once the data is received through the online Census form, it is no longer accessible online.

Linguistic access is another common barrier for many local families, with about 54% of Los Angeles residents speaking languages other than English at home. Online and phone Census forms are available in English, Spanish, Chinese, Vietnamese, Korean, Russian, Arabic, Tagalog, Polish, French, Haitian Creole, Portuguese, Japanese. However, printed Census forms are only available in English and Spanish.

There are also other ways to get language assistance, including volunteers with local organizations who offer more diverse language assistance for the 2020 Census. For example, one local LA organization, Asian Americans Advancing Justice, offers Census fact sheets in various Asian languages, webinars, podcasts, and blogs about how to engage specific Hard-to-Count communities.

I’m majoring in Political Science and minoring in Disability Studies, on the Pre-Medical track. I’m passionate about accurately counting people in for the 2020 Census because this is a once-in-a-decade chance to ensure an accurate allocation of funding for vital community programs and resources. As a second-generation immigrant, I understand the importance of accessible, accurate, myth-busting information about filling out the Census, in order to empower everyone to count themselves and their loved ones on the Census. Everyone deserves a voice!

I’m double majoring in Political Science and Communication with a Race, Ethnicity, and Politics Concentration at UCLA. As a second-generation immigrant and Iranian-American myself, I’m extremely passionate about racial justice and making sure people of color are counted on the 2020 Census. Especially after completing our project for the 2020 Census Engagement project, I better understand the significant impact of Census data on vital student resources from campus improvements to financial aid funding and the importance of getting a complete count.