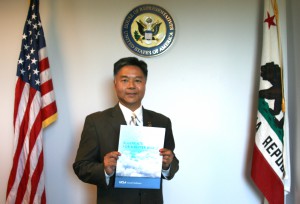 U.S. Rep. Ted Lieu (D-Calif.) won’t stop giving back to a country that gave his family so much.

“In my mind, my parents achieved the American Dream,” he said. “They went from being poor to owning a home, and gave my brother and me and amazing education. There are few places in the world where that can happen.”

The congressman earned the rank of Lieutenant Colonel during his career in the Air Force and remains a member of the JAG Corps. He has held office in the Torrance City Council, California State Assembly and Senate, and most recently won an election to replace longtime and beloved Rep. Henry Waxman.

“Like many people in America, I am an immigrant,” Lieu said. “When my parents started out here, they were poor. We lived in the basement of another person’s home. My parents didn’t speak English well.”

The Lieus eventually saved enough money to open a store in their local shopping center. They worked seven days a week and Lieu and his brother helped out in any way they could. The stores multiplied.

“It is one reason I am in politics — to make sure this dream remains open for people who want to work hard and achieve,” Lieu continued.

Lieu believes in the power of higher education to help reach this goal. From political office, Lieu has tried to help in several different ways.

Accessibility and affordability are important to the Congressman. When he served on the California legislature, Lieu was saddened to have to take so many “awful votes to cut everything,” and as soon as the economy rebounded, he made sure to lobby for a return to increased higher education funding.

“It was my view that to succeed in the 21st century, we’re not going to compete just making T-shirts, or socks, or making pencils,” he said, adding that about two-thirds of the California economy comes from top sectors like biotechnology, aerospace, entertainment and the ports. “Many of those sectors require something above a high school degree. If we don’t do better in our higher education we’re just not going to compete in the 21st century. I’m very honored that UCLA is in my district. It is an amazing and honorable institution.”

In Congress, Lieu is stumping to allow students to more easily refinance their student loan debt.

“I think it is tremendously unfair for the federal government to give zero interest rates to Wall Street banks, but then charge students a fairly high interest rate in the current market.”

If he was smarter, Lieu said, he would love to develop a cure for cancer. So instead, he has worked to help researchers through legislation and grant funding.

This year he voted in favor of the Cures Act, which increases funding for the National Institutes of Health, a major mechanism for dozens of UCLA research projects.

Beyond those issues, Lieu has authored legislation meant to combat Climate Change, and he continues to advocate for fellow military personnel and veterans. He has worked closely with the West LA VA and UCLA to improve services and the facilities for one of the largest veteran populations in the country. With only a year under his belt, Lieu has authored the House legislation that would begin transforming the VA campus, and he also convened the first ever Elected Officials Council on Veterans, bringing together local politicians to address L.A.’s veteran needs.

As far a civic engagement, Lieu said he knows one thing for sure: the voices of citizen advocates matter.

Find something you are passionate about and get active, he added, noting that the issues his staff hears about from the public go to the top of the priority list. “It does matter if people take the time to contact their member of congress or their council member, or any elected official, because not that many people actually end up doing it relative to the size of the population. You actually end up having a pretty outsized voice when you do that relative to the size of the district.”