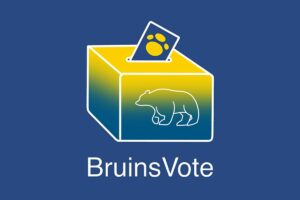 This election season will be absent a familiar scene: student volunteers set up along Bruin Walk, asking their peers if they have registered to vote, and helping them do so if necessary.

But that doesn’t mean that UCLA students aren’t out there encouraging their fellow Bruins to get civically involved, and more importantly, to make their voices heard by casting their ballots.

The students in BruinsVote, a movement made up of more than 70 student groups, clubs, and sports teams, has a goal to register 2,020 of their peers to vote. And even though today is National Voter Registration Day, volunteer efforts are already underway, even if those efforts have shifted almost entirely into the virtual sphere. The deadline to register to vote in California is Oct. 19, although the state does allow for provisional voting in-person.

“The pandemic has completely transformed all our efforts,” said Arden Dressner Levy, BruinsVote co-chair. The senior international development studies major noted how her group would normally be preparing to set up shop all around campus — including Bruin Walk — to do in-person voter registration efforts from 9 a.m. to 5 p.m. each day.

“We have to completely reimagine all of our tactics and basically figure out through a virtual setting how to get that facetime with students who wouldn’t normally seek us out,” Dressner Levy said. “It’s difficult to make sure we reach everyone we want to.”

UCLA is doing its part by offering Los Angeles County Vote Centers and early voting at Ackerman Union, Bradley International Hall and the Hammer Museum. There will also be a vote-by-mail dropbox at the parking and information kiosk at Westwood Plaza.

A new survey conducted by YouGov on behalf of the University of California shows a student body ready to get involved, and the BruinsVote organizers want to help make that process as easy as possible.

“We are the largest and most diverse generation alive at this current moment,” Sargsyan said. “And we don’t turn out to vote as much as older generations, which kind of creates a negative feedback loop, where politicians don’t listen to us because we don’t vote, and then because politicians don’t listen to us, we don’t vote. As young people see they can collectively have an impact, it will increase voting rates all across the board. And I think by starting to vote young, you’ll become a lifelong voter, which is why it’s important to target the youth vote.”

Chancellor Gene Block echoed the students’ sentiments, and encouraged the entire campus community to get civically involved this fall.

“This is undoubtedly a momentous time in our history, as the world grapples with the coronavirus pandemic, our country struggles to address persistent racial injustice and we stand on the cusp of immensely consequential U.S. elections just two months away,” Block said in a message to the campus community.

BruinsVote originated out of the Undergraduate Students Association Council external vice president’s office about a decade ago. It is a nonpartisan voter registration coalition to mobilize students — the second largest of its kind in the nation. Student government, UCLA Athletics, CALPIRG and Greek Life are just a few of the groups involved.

Beyond the 2,020 students in 2020 goal, BruinsVote is also determined to conduct voter education and awareness for upwards of 5,000 students. Its website is a one-stop shop for voting information and guides — all meant to inform students and make the process as easy as possible in a nonpartisan, respectful matter.

“UCLA is an institution that values the advancement of ideas, dialogue and knowledge, and it is a place where we welcome many diverse viewpoints,” Block said. “In any election year, tensions can be heightened between those with differing political views, and this year in particular will test our community. We should recommit ourselves to compassionate, respectful discourse and actions that promote greater understanding. I hope Bruins near and far will remember to set an example and embody our True Bruin values as we head into this important election season.”

Dressner Levy knows it’s important for her generation to show up — noting that Generation Z and millennials make up the largest voting bloc in the country. “Young people are really fired up, really interested in voting, really paying attention to politics right now at local, state and federal levels. The issue is all the barriers to actually registering to voting, confusion about voting in a pandemic, confusion about voting by mail.”

Dressner Levy lived a portion of her youth in Russia and said it informs how passionate she is about the subject of voting — something she wants to impart on her fellow students.

“My friends that remain there have basically no way to influence the state of their country,” she said. “Knowing that means that I never take for granted my right to vote here, and how impactful and important that can be, especially at the local level, which is more and more crucial.”