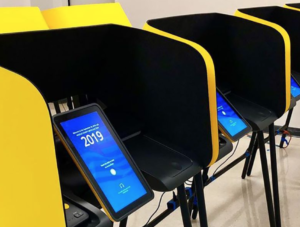 Students, faculty, staff and even members of the public will be able to vote at the Ackerman Union beginning Feb. 22, and at the Hammer Museum beginning Feb. 29. (photo courtesy Los Angeles County Registrar)

When it comes to voting, there can be a litany of excuses as to why someone doesn’t make it to the polls on Election Day — you forgot, too busy to get there that day, working too far from your polling place, among others.

To erase as many barriers as possible to voting, Los Angeles County is implementing sweeping changes for voters leading up to the March 3 primary, and the UCLA campus community will be a major benefactor as the site of two vote centers — Ackerman Union and the Hammer Museum at UCLA.

The biggest change is that voters will have multiple days to cast their ballots. Voting begins Feb. 22 at Ackerman, and the Hammer Museum will be open for voting beginning Feb. 29.

For campus and county officials, bringing vote centers to UCLA was a no-brainer.

“We are really glad that California, specifically L.A. County, is pursuing a modernizing of the voting process,” said Karen Hedges, deputy director of campus life for UCLA Student Affairs. “There is often talk of students, faculty and staff trying to squeeze in their vote on Election Day. Having a vote center in the middle of campus at Ackerman Union, and having it open for 11 days, I think, will really encourage people to make voting less of a hassle and more of a prideful opportunity.”

The new L.A. County Vote Centers not only allow for up to 11 days of voting, but also commuters with limited time can rejoice. The new rules no longer force people to vote at the one place in their neighborhoods. Instead people now can cast their ballots at any voting center location in the county.

The new system also emphasizes accessibility. Voters can make the text larger on the screen, toggle between 13 languages, change the contrast of the screen and request an audio ballot. The system is also secure — it is not connected to the internet or any network and still produces a paper ballot.

“One of the goals to moving to the vote center model was to meet voters where they are, and UCLA is an amazing university centrally located to thousands of voters who live on campus or nearby,” said Mike Sanchez, spokesman for the Los Angeles County Registrar. “We’re thrilled to have UCLA and other universities, colleges and high schools act as vote centers for the upcoming March primary election.”

A major push from UCLA students, faculty and staff is underway ahead of the Feb. 18 voter registration deadline. The BruinsVOTE! organization will be hosting get-out-the-vote events and its website relaunched this week to include extensive information on voter registration, events, FAQs and more.

“Culturally, we’re trying to weave voting into the fabric of campus life — this is what Bruins do,” Hedges added. “Bruins are civically engaged and civically minded. Our volunteer work, our service work — it all falls into alignment with this. I think it is a True Bruin Value to vote.”

“These milestones should be reminders to all of us not to take for granted the hard-won right, responsibility and privilege we have to participate in our nation’s democracy,” Chancellor Gene Block said in a message to the campus community. “I hope you will get civically engaged and show the world that #Bruinsvote.”

On March 3 at 5:30 p.m., the Hammer Museum will host Super Tuesday Bash 2020, during which people can watch election returns and pundits’ analyzing what unfolds on big screens in the courtyard.

In the meantime, BruinsVOTE! members will work to continue the gains made in student participation during the past several elections. Organizers will be canvassing Bruin Walk and promoting voting at UCLA athletics events, to name a few efforts.

“I think the biggest change is now you have 11 days to vote instead of one,” said Joshua Avila, third-year political science major and co-director of the BruinsVOTE! initiative. “This is definitely a big improvement, and we are excited to see more student turnout because of that. If it’s just one day, students might be busy that day or they just forget.”

Although there is an emphasis on registering to vote by Feb. 18, the vote center will allow for same-day conditional registration, which is a major plus, officials touted.

“If you think about it, registering to vote is the last of the antiquated processes that you can’t just do instantly,” Hedges said. “That does not resonate with our students, who are last minute and who are used to being able to do something right now. In our last few elections we’ve had long lines of provisional ballot people in hopes that their votes will still count.”

Having 11 days and same-day registration should lessen voter congestion, she said.

The UCLA campus voice can and will be a vital one, said Elisa Chang, graduate student studying education and BruinsVOTE! co-director.

“If we want to be able to shape the future that we’re going to literally be inheriting, then we all actually do need to vote and make ourselves heard,” Chang said.