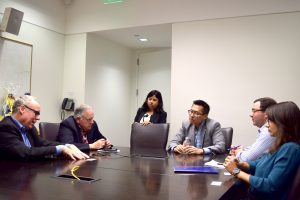 Head representatives of the Institute of Transportation Studies chat with Assemblymember Vince Fong.

When members of the UCLA Institute of Transportation Studies (ITS) meet with elected officials, they often pride themselves on being ready for just about any topic that might come up during the discussion. If something new comes up, they are ready to dive in headfirst.

“We want to do research on questions people don’t know the answers to,” ITS Director Brian Taylor said during a recent campus meeting with Assemblymember Vince Fong. “We take this public policy mandate seriously.”

That public policy mandate was taken up a notch during the last year, when the California State Legislature ratified a bill that will distribute approximately $5 million to University of California to be divided among ITS units at UC campuses in Los Angeles, Berkeley, Irvine and Davis.

The passage came on the heels of a number of meetings by ITS officials in Sacramento, and the effort included 56 letters of support from important transportation industry partners. 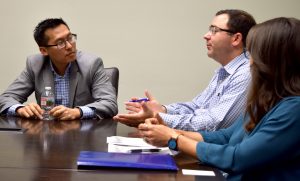 ITS Associate Director Juan Matute makes a point during a recent discussion with Assemblymember Vince Fong.

“The state spends a lot of money on transportation and every legislator knows how much they are spending,” said Juan Matute, associate director of UCLA ITS. “They want to figure out the most cost effective and innovative ways … to better serve the people of California. Those priorities align nicely with a research agenda, and how to figure out how to make a transportation system that better serves the people.”

Meetings took place throughout the spring where ITS brought different experts to Sacramento as a method to show the diversity of topics, and more importantly, the diversity of research that could impact every and all parts of the state. After the bill for increased funding passed in April, many of the meetings were a chance to say “thank you,” and an opportunity to push topics forward, tamping down on what legislators really want to see as the partnership grows.

In particular, officials wanted to thank Assemblymember Richard Bloom, who was a champion throughout the process. Senator Jim Beall and Assemblymember Jim Frazier were also credited with initiating the funding increase.

“I’d say it’s a really good partnership,” Matute said. “The state of California has very aggressive environmental goals for the state and transportation system. It really motivates the need for research and innovative ways for approaching transportation.” 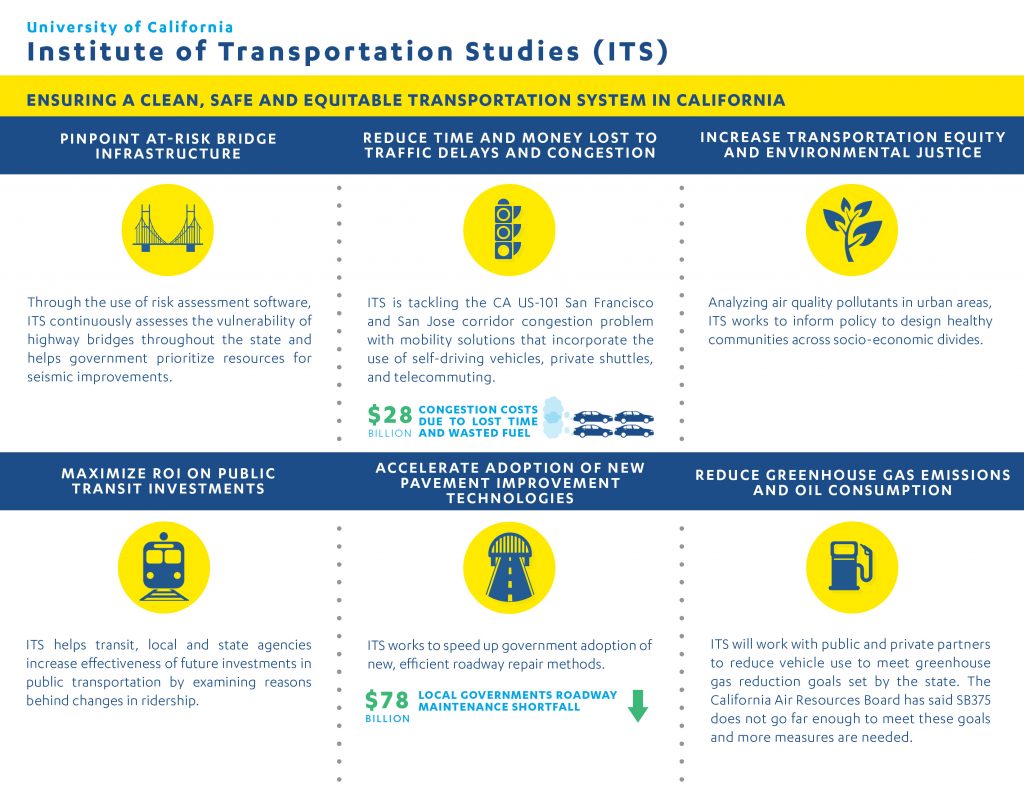 The ITS partnership is something that shows the promise realized of a state and UC partnership — research made tangible. “You can usually connect transportation with something everyone cares about, you can reach so many different priorities,” Matute added.