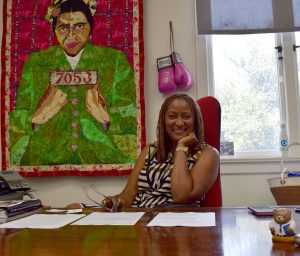 State Sen. Holly J. Mitchell hasn’t forgotten about the importance of higher education as she has ascended to chair of the Senate Budget and Fiscal Review Committee.

California State Senator Holly J. Mitchell has been working toward this moment for as long as she can remember.

“I’ve always been civically active, so I grimace when people confess that they aren’t,” she said from her office in Exposition Park, reflecting on a life dedicated to her community at large. “It’s our collective and individual responsibility.”

It wasn’t that Mitchell’s parents forced this mentality onto her, but both were social workers, and social consciousness and advocacy was just woven into the family persona. And sometimes that meant her mother needed to be out of the house at 5 a.m. to open a Riverside County clinic.

“Sometimes it’s circumstance. “My mother would say, ‘Come ride with me to Blythe on a Saturday morning.’” Mitchell playfully rolls her eyes recalling a 5 a.m. trip to a Riverside County methadone clinic. “It’s just what they did. And so it was an integral part of me.”

Her parents helped the community in many ways. Her father was part of the Urban League. Her mother worked in probation and corrections. When the couple split up, Mitchell moved to Riverside with her mother, who took work as a director of the alcohol and drug program for the county.

It rubbed off on Mitchell, even if her journey took her on a different path.

“I’m sure my Christmas-in-July program was fueled by any number of toy drives and efforts my mother engaged in on behalf of her kids on probation. She was a hustler, and if someone needed something, she was going to get it, unapologetically.”

Mitchell remembers her mother cursing out a women’s civic group for giving used items and toys for a particular holiday drive — giving “less than.”

Coming from where she grew up in Los Angeles, Riverside was a culture shock. Mitchell went from living in a predominantly black community to living in a predominantly white one. All of a sudden, she heard racial slurs uttered her way. “That’s when my activism in the black student union and my student activism took a very different turn,” she said.

At UC Riverside, she took note that there were no African-American tenured professors. She began “confronting the institution we were a part of” and questioning things. She joined the student protests for the University of California system to divest any interests having to do with South Africa and Apartheid. 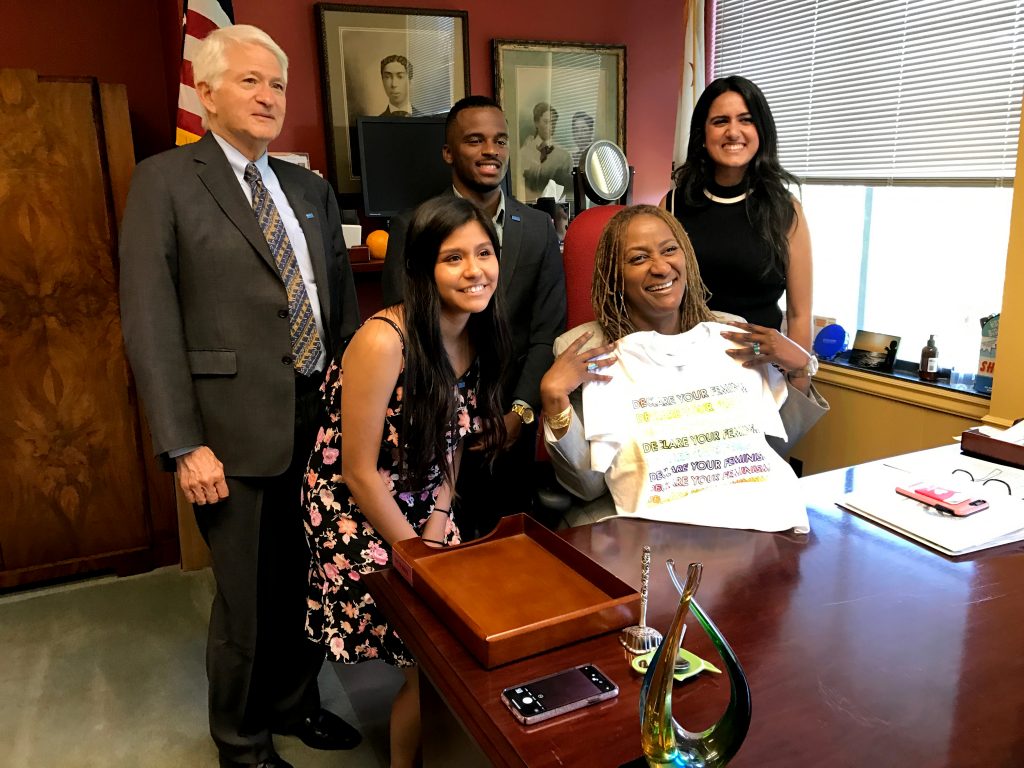 Sen. Holly Mitchell met with a coalition of UCLA students and Chancellor Gene Block this spring to discuss state investment in the University of California.

She was a political science major, but it wasn’t until she received a Coro Fellowship that public affairs became real to her.

“Undergrad doesn’t give you a sense of the world. You are regurgitating poly sci from a historical perspective, but how do you fit into the world? It created the space for me to learn to problem solve and become a critical thinker,” she said.

After college, she worked for former State Senator Diane Watson — first as a field deputy in the Crenshaw area and then in the Capitol office. She also gained experience as committee staff, and was exposed to a number of powerful political women through a special mentorship program.

When Watson termed out, Mitchell fled the Legislature. She worked for the California Black Women’s Health Project, lobbied for the Western Center for Law and Poverty, and more. She is well known in her community for her time as head of Crystal Stairs, the largest delivery unit of the public childcare system in the country.

Mitchell went 360 degrees — Crystal Stairs (founded by two UCLA graduate students) was implementing policy she helped to write as a staffer in the Legislature. “I wanted to see if this actually works. I wanted a broader and more expansive work experience. People at the Capitol understood the mechanics of a state budget, but few understood the human impact the budget had on people. They were Sacramento policy wonks who moved numbers in and out of columns. What interested me in public policy was the impact on real people.”

This ideological mantra has come to define this more recent chapter of Mitchell’s life. She was genuinely happy to be the person behind the scenes, especially after witnessing an ugly campaign when Watson ran for the Los Angeles County Board of Supervisors.

But the state was struck hard by the recession, and Mitchell got mad enough to decide to run. “I realized I had the kind of experience and knowledge to perhaps be better equipped in the concept of the budget to navigate it during tough fiscal times. I could approach cuts, which was clear we had to do, with a scalpel rather than a sledgehammer.

“It was my experience at Crystal Stairs, as a service deliverer, that made me realize I had to take that experience back to the Legislature.”

She joined the Assembly the same year Governor Jerry Brown was elected. She was present for the massive budget cuts.

At that time, Assembly District 47 included UCLA. “Campus folks have always been very generous,” she said.

Redistricting moved her to Assembly District 54. She won a special election for Senate District 26, and is now the representative for Senate District 30, running unopposed for a second term. The last two years, she has ascended to the Senate Budget and Fiscal Review Committee chairperson.

“As the overall chair I feel a real responsibility to manage the process — to function more at the 10,000-foot level and to look at major initiatives. It is more about being the shepherd of the overall process. I’ve been very careful to not be perceived by my colleagues as a chair who is only going to run her own agenda. I don’t think that helps.”

Being chair the last two years has been about working on investments rather than cuts, which is a relief to Mitchell after she entered the Legislature in dire times. 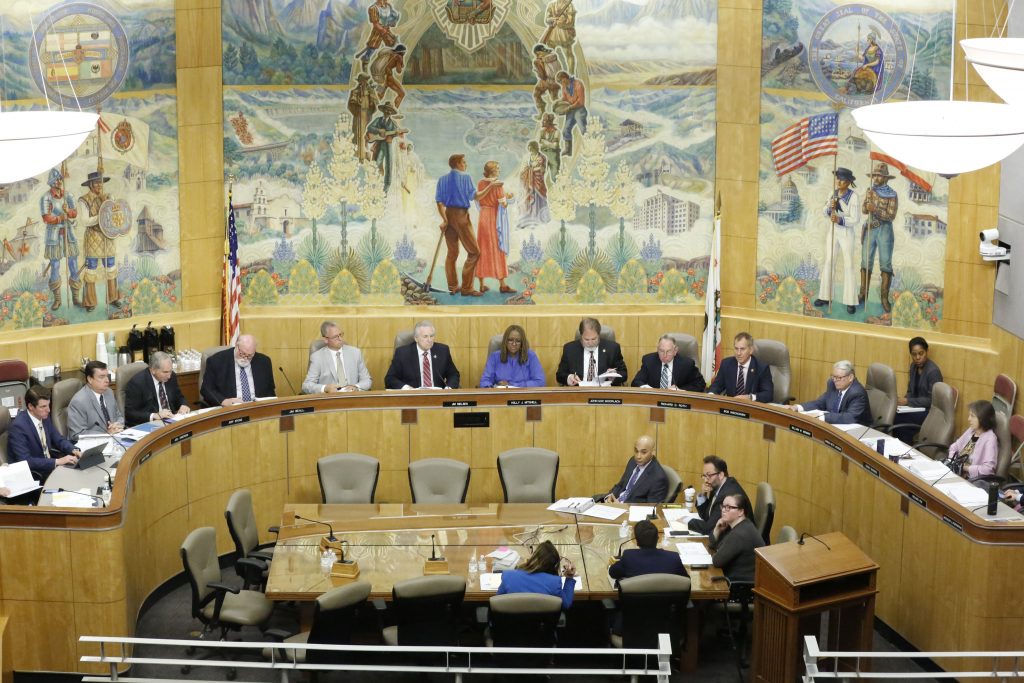 She is a champion of education, and understands the UC’s place in that, especially regarding deferred maintenance and pension liabilities. “All those issues are issues that have intensified over the years due to lack of investment. I have played a strategic role in helping to shepherd those dollars through the process to benefit the UC.

“I’m coming out of early childcare and education. I’m passionate about poverty alleviation. I am clear that higher education is the pathway out.”

With that said, Mitchell will not apologize for pushing the UC and, in particular, UCLA. “I’m interested in who gets to your campus and how we successfully help them matriculate out of your campus. We’ve worked to try and hold your campus’, among others, feet to the fire as far as diversity. I think there is always conversation and work to be done as far as how we support you and you support students within even walking distance of your campus.”

Beyond that, Mitchell commended the Ralph Bunche Center, which was just allocated $1.8 million from the state legislature during this most recent budget cycle, which will help its research regarding the state’s prison system and criminal justice reform, among other topics. “It’s exchanges and supports like that, which are beneficial to all Californians,” she added.

Mitchell commends the enthusiasm of higher education advocacy, but she also doesn’t mince words when it comes to those still sitting on the sidelines civically, wondering what to do next.

“I’m not sure what that is, where people are just immobilized,” she said. “Throw the spaghetti against the wall — anything and everything people can do. People just have to show up. Don’t worry about what is the most effective strategy — just show up and do something. Call. Email. I’d rather get the call on something that is not in my lane of government, than not get a call at all. Don’t get stuck thinking, ‘I have to figure out the best strategy.’ It’s like Nike says JUST DO IT.”