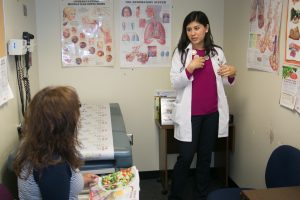 Professor Mary Ann Lewis only wants students in her UCLA family nurse practitioner (FNP) program who understand what it really means to have that title.

“We’re not preparing family nurse practitioners to practice dermatology in Beverly Hills, that’s not our philosophy. Nursing has always meant taking care of the poor. From public health nursing in the early 1900s, all the immigrant communities, they took care of the poor, that is nursing’s forte.”

Through California Song-Brown grants, the Caring for the Underserved program was born more than 20 years ago, pairing UCLA School of Nursing with community health clinics around the Los Angeles region. Now, the program is being recognized for its longterm successes with the UCLA Landmark Community Program of the Year.

Caring for the Underserved was established in 1993, and its students have served more than 444,000 people since then. Each year, 40 first-year students see an average of 130 patients annually, and 40 second-year students see 980 — in communities throughout the region from Arroyo Vista to Watts.

The roots of the program stretch back as far as 1971, to a special nursing pilot program Lewis implemented. Eventually, some of that curriculum was taken to the graduate school. Defined, a family nurse practitioner is capable of taking care of patients across the entire human lifespan, while also having the skills to care for emergency problems or those who have been hospitalized and come back to the clinic. An FNP may work as many as 10 hours a day. 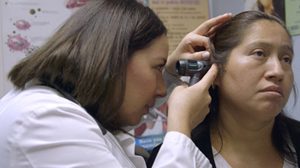 FNP students go on to work at the underserved clinics more than 50 percent of the time in recent years, as they became major parts of the community.

“They are family-oriented, and they take care of the patient in the context of the family,” Lewis said.

In 1989, Lewis looked to further strengthen the family nurse practitioner program, and the Song-Brown legislation that allocated money for family medicine training programs became the vessel.

“So now we have partnerships throughout Southern California. They want our students. The outcomes for Song-Brown are that the graduates of the program practice in an underserved area after graduation, and over half of our graduates do, which is pretty phenomenal,” Lewis said.

When the majority of training for the nurses occurred in one clinic, they became more invested, which led to higher retention rates after graduation. Clinics were chosen for the highest poverty rates and most underserved.

“Being able to come here as a student, I was able to realize how much we all really have and take for granted — how precious healthcare is and how there is a complete different side of the world,” said Carol Vasquez, family nurse practitioner and class of 2015. “Working as an FNP for two years and now looking back on my time as a student, I feel very fortunate to have been a graduate of the UCLA School of Nursing and a participant of Song-Brown. It gave me a very special training that I am able to use on a daily basis with my patients.”

Recruiting from those underserved areas is a point of emphasis, along with making sure whoever it is, gains an understanding of the area.

The family nurse practitioners program lasts two years, and is very popular because of the variety of jobs — pediatric, longterm elder care, family practice — those students can compete for after graduating. “They come to us with skills, but what they have to learn is total assessment, and to think about issues across the age spectrum,” Lewis said.

“What’s exciting is that it has put the UCLA School of Nursing at the forefront,” Lewis said. “The community knows who we are. They want our graduates. They email us and say they are looking for personnel. This is really great. We don’t have to plead with people to take our students. They want to recruit them and groom them.”