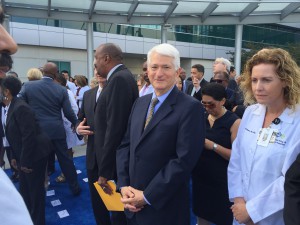 UCLA Chancellor Gene Block was among the dignitaries who attended the opening of Martin Luther King, Jr. Hospital.

In a collaboration that exemplifies UCLA’s commitment to working outside of its Westwood boundaries, officials gathered to celebrate the opening of the new Martin Luther King, Jr. Community Hospital, and the beginning of a new partnership.

The dedication ceremony took place on Aug. 7 at the new hospital, located at 1680 E. 120th St., which was built through a public-private partnership. Los Angeles County contributed $284 million for its construction and $171 million in start-up funding, but the hospital will be run by the nonprofit Martin Luther King, Jr. Los Angeles Healthcare Corporation, with its own independent board of directors. 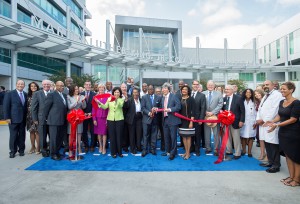 UCLA has collaborated with the hospital on medical staffing, specifically involving the university in recruiting a chief medical officer, chief quality officer, and other physicians for the hospital.

“UCLA, on behalf of the University of California, is proud to partner with the Martin Luther King Jr. Community Hospital leadership, physicians and staff; the County of Los Angeles and its partnering facilities; and the community, to provide high quality healthcare to the residents of the area surrounding the new hospital,” said Dr. Patricia Kapur, executive vice president of UCLA Health and CEO of UCLA Faculty Practice Group. “We anticipate this very important partnership to grow and strengthen going forward.”

The facility opens as the city reflects on the 50th anniversary of the Watts Riots. In response to that time, King/Drew Medical Center opened in 1972 in South Los Angeles. The hospital was ultimately forced to close decades later, in 2007, because it failed to meet standards.

“The re-opening of the MLK hospital is vital for providing quality healthcare to underserved communities in South Los Angeles,” Government and Community Relations Assistant Vice Chancellor Keith Parker said. “As a part of our public service mission, the University of California and UCLA has been a vital partner in this effort since the initial closing of the MLK hospital in 2007.”

In 2009, the Los Angeles County Board of Supervisors approved a plan to build a new hospital in place of the King/Drew Medical Center to be part of the greater Martin Luther King, Jr. Medical Campus (other campus features so far include the MLK Center for Public Health, which opened in 2011 and MLK Mental Health and Urgent Care Center, which opened in 2014, with more services planned for the future).

“UCLA has been an excellent clinical partner with us in this venture,” said John Fisher, Chief Medical Officer at Martin Luther King, Jr. Community Hospital. “From the beginning, they have been very engaged in the clinical workflow design as well as assisting with our hospital’s quality and safety plan. In addition to assisting in the development of medical committees and physician evaluation processes, UCLA sets a solid foundation for the hospital’s clinical operations.”

Officials said it was vital the hospital “provides high-quality and compassionate care to anyone who needs it, regardless of citizenship or ability to pay.” To that end, the county will pay the hospital $18 million a year to care for patients without health insurance.

It will feature 131 hospital beds and provide general medicine, emergency and intensive care, as well as maternity and surgical services.

Overall, the new hospital will serve nearly 1.35 million residents from Compton, Inglewood, Watts, Willowbrook, Lynwood and surrounding communities — serving as another great example of how UCLA works outside of campus and within the entirety of the Los Angeles community.