Intellectual property law continues to evolve, and the UC system, with “shining star” UCLA, will continue to play a big part in that ever changing landscape.

Under Secretary of Commerce for Innovation and Director of the United States Patent and Trademark Office (USPTO) Michelle Lee imparted those thoughts and many others during a lecture hosted by the UCLA School of Law and UCLA Government and Community Relations on Tuesday, July 28. 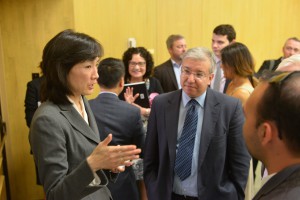 “Although I was born in the Silicon Valley and spent the majority of my career in Northern California, I’m always delighted to visit Southern California and Los Angeles in particular,” she said to a crowd of more than 175 students, faculty and IP professionals.

This was Lee’s first visit to Southern California since she took her director post at USPTO. She has past experience as director of the USPTO satellite office in Silicon Valley, and during her speech and a Q&A discussion that followed, she stressed the need for her office to branch out.

“There is a lot of business outside of the Washington D.C. area,” she said, adding that she wants the USPTO to be more easily accessible to the innovation community. “We seek public input on our public policies. It should [include] everybody with a role or a stake in the system.”

“Whatever part of California we come from, we can all take justifiable pride in the UC system because of its preeminent role in education and research,” she said. “And its leading role in capitalizing on its research in the form of intellectual property, specifically patents, in the global marketplace.”

Lee also noted the importance of L.A.’s broader mix of innovation in all areas of intellectual property, especially copyrights and trademarks, which are important to the motion picture industry.

She said a continued main goal of USPTO is to foster innovation in America, especially with countries like China looking to shift from a manufacturing-based economy of inventions developed elsewhere, to an innovation-based economy with technologies developed in China.

“We cannot afford to stand still as other nations seek to catch up,” Lee said.

When asked about the fact that she is the first female USPTO director, Lee said it was important and an honor, adding that there are still too few women in technology industries.

“It’s a matter of economic imperative,” she said, adding that country couldn’t afford to leave any talent behind if it wanted to keep ahead and promote American innovation.

The question and answer period, moderated by UCLA School of Law Dean Rachel Moran, drew a number of enthusiastic questions.

Lee addressed a question about whether different rules should be created for different technologies, countering that it would be complicated due to the possibilities of an innovation falling within multiple categories.

She noted that change must come from wherever it can. “We’re getting reform in all three branches of the government.”

She said that the USPTO is working on a white paper to deal with some necessary changes regarding the Internet and the digital age. She said officials are also working on larger reforms through the legislative process.

“We’re working with Congress on legislation to curb abusive patent litigation practices, increase the transparency of patent ownership information, and level the playing field for all innovators,” she said.

To conclude, Lee again lauded the work of universities, and said she would continue to work as best as she and the department could heading into the future.

“UCLA’s competitive drive — its determination to strive for even better performance — is an inspiration to me as head of the US. Patent and Trademark Office,” she added.