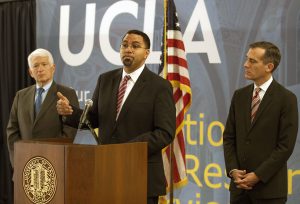 U.S. Secretary of Education John B. King Jr. was at UCLA on May 9 to announce a proposal by the U.S. Department of Education to ask higher education institutions to remove barriers that are keeping students from getting a college education or job training because they have been involved in the criminal justice system in the past.

While University of California system has never included questions about applicants’ criminal history on its application forms, many other institutions across the country have. Such questions on college applications deter would-be students from getting a second chance in society through education and success in the job market, King said during a press conference held at the James West Alumni Center.

“What we hope is that this will prompt a conversation on the campus of every university about how to move forward,” King said, “to learn from best practices like those in the UC system and how to use those best practices to open up opportunity for [students] who are just hungry for a [second] chance.”

President Obama has been deeply committed to this issue ever since he came to the White House, King noted. “Whether through the ‘My Brother’s Keeper’ initiative or the work that we’re doing with our [Federal Interagency] Reentry Council, we’ve been focused across agencies on working to support local initiatives that allow folks who made mistakes in their lives to get a second chance and to get their lives on track.”

The Department of Education’s proposal, “Beyond the Box: Increasing Access to Higher Education for Justice Involved Individuals,” offers recommendations to higher education institutions to adopt admission policies that would attract a diverse, qualified student body without creating barriers for those who have been involved in the criminal justice system. 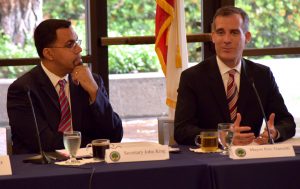 These barriers affect those who have been arrested but not convicted, convicted but never incarcerated or formerly incarcerated.

UCLA Chancellor Gene Block said that a private panel discussion that King held earlier this morning with participants that included college graduates from across California who were formerly incarcerated was held “at exactly the right university” because “the UC system is all about inclusiveness.”

“We’re very proud of that,” the chancellor said. “We have a tremendous success record with students coming from very, very different backgrounds who are all successful here.” 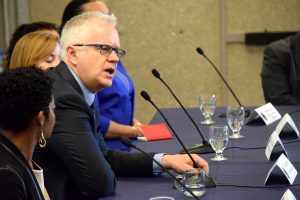 Actor Tim Robbins testifies to the power of rehabilitation for those who are incarcerated. (photo by Jonathan Van Dyke)

“UCLA is indeed the pioneer in this,” said Los Angeles Mayor Eric Garcetti, who sat in on the closed-door discussion.

More than 70 million Americans have been involved in the criminal justice system, including a disproportionate number of people of color, according to the Department of Education. Black defendants in the federal system typically receive sentences that are nearly 10 percent longer than those of white defendants for similar crimes. In 2013, black males between the ages 10-17 were more than twice as likely to be arrested as white males. Juvenile arrests can lead to a criminal history, creating a potential barrier to college.

A study by the RAND Corp. shows that there’s a 43 percent reduction in recidivism for those who have access to education and job training while incarcerated, King pointed out. 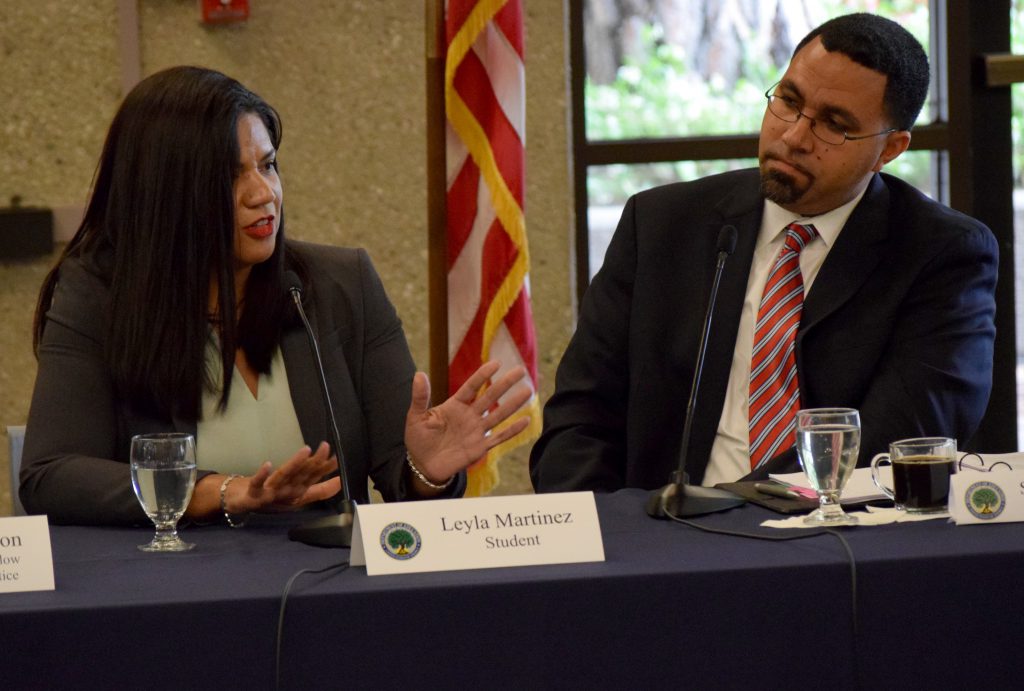 Leyla Martinez gives her own personal story of struggle and success as a student. (photo by Jonathan Van Dyke)

“It’s pretty simple,” said Garcetti. “We either do this and see the potential of people to become research scientists, to become policy experts and advocates, to become graduates and business people. Or we pay for it in a different way … when we haven’t figured out a pathway to pull people out of the situations that got them there.”