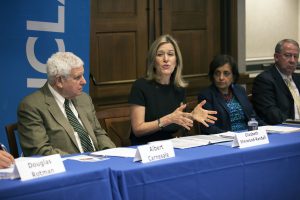 What will the future of L.A.’s energy system look like in 10 years, 20 years and beyond?

To create a roadmap for the region’s future as part of the U.S. Department of Energy’s Mission Innovation initiative, U.S. Deputy Secretary of Energy Elizabeth Sherwood-Randall met May 10 with stakeholders from across the energy ecosystem at UCLA’s Kerckhoff Hall.

A panel of representatives from academia, the private sector and utilities agreed on three overarching themes underpinning the transition to the future: the need for urgency, collaboration and innovation.

This urgency is driven by the rapid pace of climate change resulting in rising sea levels, flood, drought and other consequences, and California’s aggressive goal to produce 33 percent of its energy from renewable sources by 2020 and 50 percent by 2030.

There is no time to delay, Sherwood-Randall said. “We need to get our inventors thinking about their projects with urgency to meet the needs of the time scale that we are talking about.”

The need for more collaboration across the energy ecosystem is also vital, participants said. “Innovation isn’t a ‘eureka lightbulb’ moment; it is the result of a long collaboration,” said Jayathi Murthy, dean of the UCLA Henry Samueli School of Engineering and Applied Science, who was on the panel.

Matt Petersen, chief sustainability officer for the Office of the Mayor of Los Angeles, further stressed the importance of collaboration among stakeholders as he reported on progress the city has made toward meeting the goals of its sustainability plan. “L.A. will become the most sustainable city in the nation if we keep on track with our goals, and we will create the city that we want. But we need collaboration with industry and technology innovation.”

Angelia Galiteva, a board member of California Independent System Operator, a major energy agency in the state, said that collaboration among utilities, system operators, and local and regional policymakers is necessary to make progress. “We can go beyond 50 percent renewable integration in the grid; we are operating at 46 percent renewables now,” she said. “We can handle it, and we don’t need a technical breakthrough. We can easily move to 60-70 percent. We just need to integrate regionally and have a vision.” 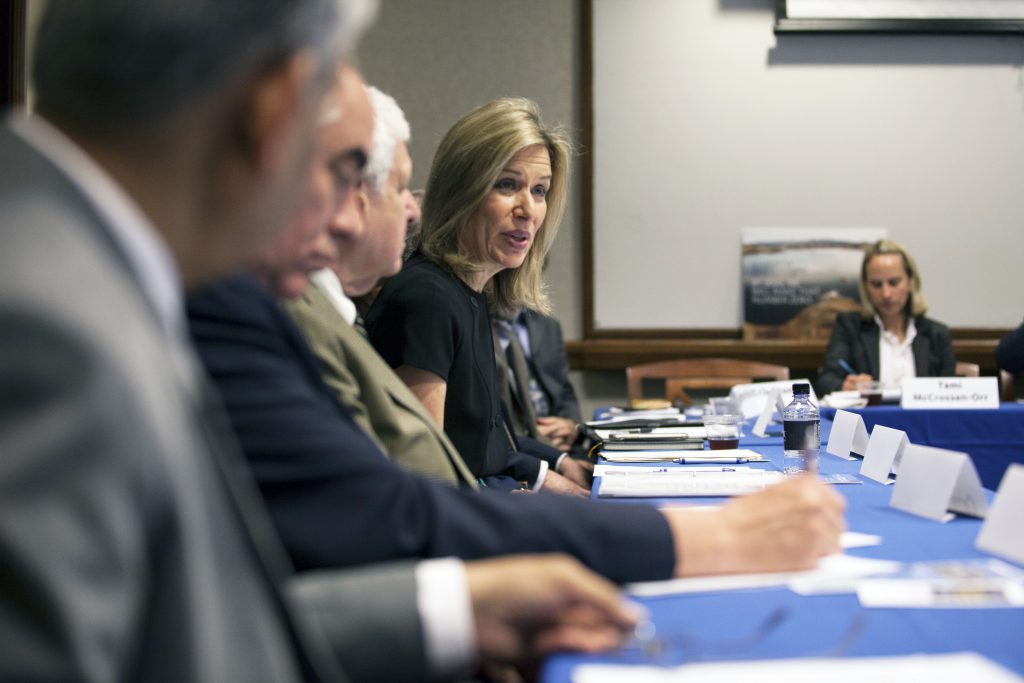 Sherwood-Randall, US deputy secretary of energy, came to UCLA to meet with representatives of academic, energy utilities and industry to talk about how L.A. can meet its energy goals for the future. (photo by John Vande Wege)

Panelists also agreed that to get the right technologies in place to facilitate energy transformation would require innovation. And the resources to fuel innovation are in place make this systemic transition happen. “The Department of Energy estimates that $13.5 trillion will be invested in clean energy between now and 2030,” Sherwood-Randall said. “The most important thing we need now is imagination and invention — and a lot of work has to happen both in terms of research and in terms of getting the technology to market.” Private investment and institutional partnership are key, she said.

To underscore the progress being made in research labs and fieldwork, a number of nationally recognized scientists on the panel shared details about groundbreaking work that could lead to a sea change in the energy system.

At UCLA, under the campuswide initiative Sustainable LA Grand Challenge, dozens of faculty are working on the goal of shifting Los Angeles to 100 percent renewable energy by 2050. The campus is also making changes to achieve climate neutrality by 2025 after having already reached its 2020 goal to roll emissions back to 1990 levels.

Two of those UCLA scientists at the meeting spoke about their research. Yang Yang, the Carol and Lawrence E. Tannas, Jr., Chair in Engineering and a professor of materials science and engineering, is putting affordable solar material on surfaces in the built environment. Eric Hoek, professor of civil and environmental engineering and a member of the UCLA Institute of the Environment and Sustainability, is working to solve a variety of issues around the energy water nexus.

Hoek stressed the importance of being free from bureaucracy to be able to quickly take prototypes to market. The CEO of Water Planet, he described his experience of setting up companies to reach the marketplace.

Los Angeles’ future energy system will rely on new technologies to harness energy from a variety of new and existing sources — including solar, gas, and wind from New Mexico and Wyoming — and to create sophisticated storage and distribution systems, participants heard.

But such an energy system must also serve all citizens across the region equitably, said Michael Kadish, executive director of GRID Alternatives Greater Los Angeles, an organization that installs solar electric systems for low-income families with the assistance of volunteers and job trainees.

“The solutions don’t mean anything if they are only applied in Westwood and Brentwood,” Kadish said. “But they also need to be applied in Boyle Heights. And the cost of grid maintenance must be dispersed across all energy users, not just borne by those who can’t afford solar panels.”