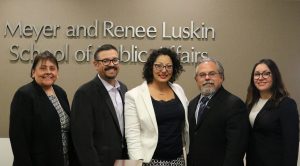 Cristina Garcia of the California State Assembly spoke about her efforts to make government more transparent during an Oct. 16, 2017, gathering at UCLA hosted by the Latino Policy and Politics Initiative. Garcia talked about the grassroots battle against political corruption in the 58th Assembly District in Southeast Los Angeles that eventually led her to seek office.

“I’m an idealist at heart, and I do believe that we can have a democracy that works for us all.” Garcia talked about her three policy pillars: government transparency, women’s issues and environmental justice.

She believes in standing up for the majority-Latino district she was elected to represent, but she envisions California as a place where every group of voters has equal input and access to the political system. She advocates for a more diverse and representative political system in which all Californians have an equal seat at the table.

“For me, when I talk about where I want to see my society, we can’t shy away from race,” she said during a Q&A with students, staff and faculty from UCLA Luskin, the Division of Social Science, Grad Division, UCLA’s Early Academic Outreach Program, the Institute of Environmental Studies, and UCLA’s Government and Community Relations. “We can’t shy away from things that are real systemic barriers.”

Although she faces hurdles when pushing many issues of importance to her constituents, she said that time and changing demographics are on her side.