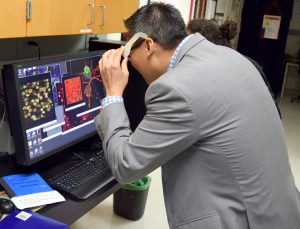 The University of California announced today (Nov. 30) that a $22 million investment from the State of California to accelerate innovation and entrepreneurship across the UC system has supported more than 500 new startups and existing companies, helped launch at least 47 new products and enabled companies to attract $3.7 million in additional investments.

Assembly Bill 2664, the Innovation and Entrepreneurship Expansion, was authored by Assemblymember Jacqui Irwin and signed in fall 2016 by Gov. Jerry Brown. Through the bill, each of UC’s 10 campuses received $2.2 million in one-time funding in Jan. 2017 to invest in infrastructure, incubators and entrepreneurship education programs.

“We are grateful to members of the Legislature and the Governor for their strong support of entrepreneurial activity and innovation across the UC system,” said UC President Janet Napolitano. “We are thrilled to see how these funds are accelerating the research and ideas nurtured in our laboratories and classrooms into the marketplace, where they can benefit the California economy.”

In a report sent to state officials, UC provided an update on the range of activities supported by AB 2664 funds across UC’s 10 campuses. Early results show that the state funds are having an overwhelmingly positive impact:

• At least 47 products were launched with the support of AB 2664 programs, ranging from footwear made with sustainable materials to smartphone applications for managing campus parking.

• Startups leveraged their experience and funding from AB 2664 programming to attract at least another $3.7 million in additional investments, helping them bridge gaps to commercialization.

• AB 2664 funds enabled UC campuses to add over 38,000 square feet of space for UC researchers and entrepreneurs to work on their projects in 2017, attracting 1,200 more users of those spaces than in the previous year.

• Over 3,600 members of the UC community attended networking, pitch events and entrepreneurial education workshops supported by AB 2664 funds, an increase of some 1,700 participants from the previous year.

“AB 2664 funds have been and will be used as a catalyst to bring together resources on campuses and within local communities to develop entrepreneurial skills and to help commercialize new products and technologies,” said Christine Gulbranson, UC’s senior vice president for innovation and entrepreneurship.

“UC’s status as a research university and its public service role point to a growing opportunity to leverage the research and academic resources of the university, supporting more startup businesses and local economic growth,” said Gulbranson.

In 2013, Napolitano launched the Innovation and Entrepreneurship Initiative to leverage the scale and diversity of the UC system to build an even more vibrant entrepreneurial culture. For more information about innovation at UC, including UC’s new contest for alumni entrepreneurs, visit http://entrepreneurs.universityofcalifornia.edu/.