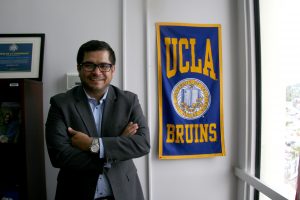 “I realized that if I didn’t do something — if I didn’t get a better education — this would be the rest of my life,” he said. “One day, my friend Kevin dragged me to Riverside Community College where he attended and encouraged me to sign up for just one class.

Then he excelled at the class.

“That gave me the courage to take more classes,” he said. “But I had to start from scratch — basic classes, basic math. I had to build myself up.”

Once he had conquered community college, Gomez was very particular about where he would transfer. “All I applied to were UCs back then.”

He was accepted to UCLA, a dream, and he decided to attend without having ever stepped foot on campus — not even driving through Westwood.

“For me, it wasn’t about the campus,” he said. “It was about what kind of job I could get in the future and what kind of future I could have if I attended a world class university like UCLA. When I got in, it was a big deal. It was all based on the idea that education can give you the opportunity to change your life. UCLA gave me that opportunity.”

By the time he arrived at UCLA, Gomez said he had begun to really delve into how he could impact his community and help it flourish, a line of thinking that began at Riverside Community College and was shaped by his childhood experiences.

Gomez went through bouts of serious illness as a child. Like other kids in his community whose families could not afford health insurance, Gomez would often be unable to see a doctor until his illnesses became dire enough to land him in an emergency room.

These childhood experiences led Gomez to start college as a biochemistry major, with plans to become a doctor and serve communities such as the one he grew up in.

Early into his college days, Gomez attended a special Honors Society State Convention – an event he had decided to go to because a girl he liked was going. At this convention Gomez attended a political activism workshop that would not only go on to change his mind about his major – but also set the course of the rest of his career.

Speakers at the workshop talked about how to impact the issues facing certain communities and extolled the virtues of collective action, including labor movements.

“I decided on my way back to community college to run for president of the honors society,” Gomez said. Within six months, he changed his major to political science.

“A lot of the issues that I saw that were impacting my community — for someone to be able to get a job, healthcare, education — a lot of it was determined by public policy and driven by government. How do you change that?” 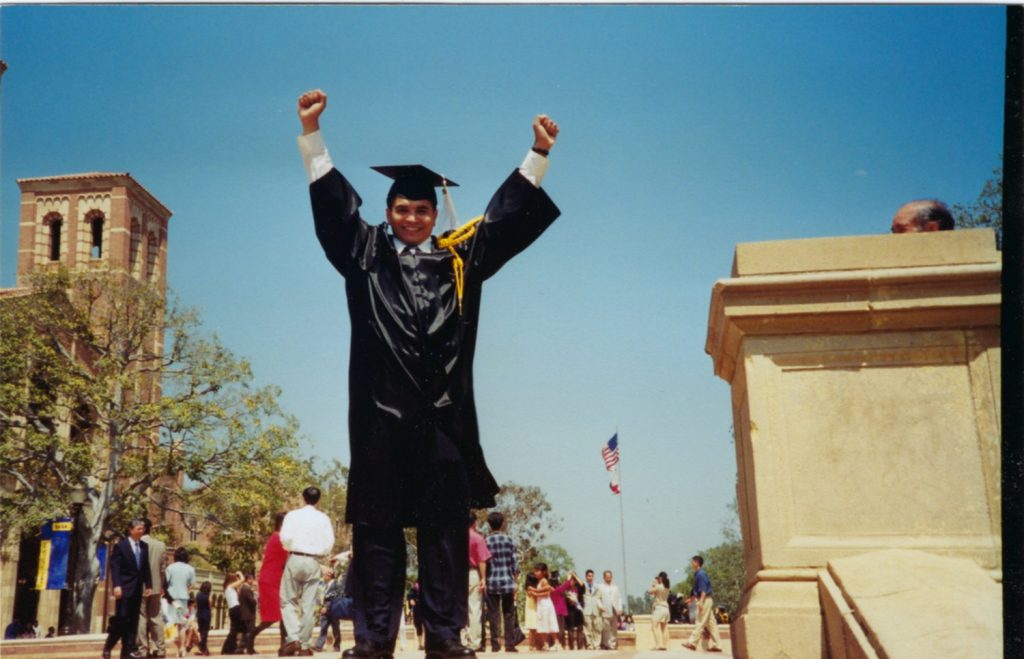 At UCLA, Gomez said he was routinely inspired by his professors, including former Governor Michael Dukakis who taught an intro to public policy class at the time, whom he sees as a mentor.

“He taught me about government, politics and public policy,” Gomez said. “He really did encourage me to look into public policy for my master’s degree.”

As a member of the state assembly, Gomez saw the need to protect the higher education system that had helped him get that far.

“Higher education is crucial in order for most people to change their lives,” he said. “It’s almost a prerequisite now in order to be able to do anything. I think we’ve done a good job, as the state of California, in supporting the UC system and the Cal State system, but there is more we can do.

“The best thing we can do is look at our entire system of state government, and mainly our budget, and how we have revenue coming into the budget. Everyone prioritizes higher education, but the minute there is an economic downturn, tough decisions have to be made, and that impacts every aspect of the budget.”

Legislators are also looking for advocate allies, and a new generation of activists.

“I think the best way is to be engaged on a variety of issues, not just UCLA but also regarding whatever other issues they care about,” Gomez said. “It’s even better if they are from your own district. I’ll admit I listen to community activists and leaders in my jurisdiction more than from someone from the West Side. People need to be directly from the area that a member represents.

“If they are very active on other issues in the community, they will be paid attention to. That’s someone I’ll run into time and time again. Civically engaged people have a big impact.”

Gomez wasn’t immune to this call. Earlier this year, he won a special election for California’s 34th Congressional District.

“Right after the election of President Trump, a lot of people were looking at what to do to fight back,” Gomez said. “When the seat opened up, I had a decision to make and to make it quickly. This seat only opens up once every 24 years. I had to decide whether I’d stay back in California where I was doing great work, and I really did enjoy the job of being a state Assemblymember, or do I jump in and take the fight to Trump? This was an opportunity to fight for California.”

Gomez said he wants to make sure California values ring true in Congress, whether that be protecting the LGBTQ community, working on immigration inclusion and reform or preserving the environment while creating good paying jobs.

While it’s been a massive change to move from a Democratic super majority in the state assembly, to the opposite in the U.S. House of Representatives, Gomez said he doesn’t regret the move.

“The power of the bully pulpit and being a member of the Congress still outweighs some of the issues I could fight for at the state level,” he said. And at minimum, just like citizen advocates, Gomez has a story to tell, and one that can always benefit from a larger megaphone. “If you can inspire with your personal narrative, that’s still one of the most meaningful things you can do.”

In Congress, Gomez sees federal student aid and loans (Perkins loans, public sector student loan forgiveness programs) as a pathway for him to keep impacting higher education. And keeping the higher education ladder intact, from community college to the UC, is essential, he concluded.

“My success was based on our entire system,” he said. “As long as we can keep that entire system working, we are going to do very well as a state. That’s my No. 1 goal, to continue that opportunity for future generations.”