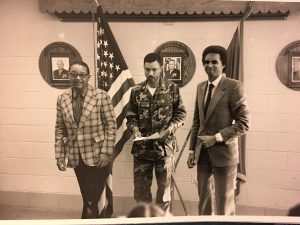 Arthur Ashe Sr. stands with his sons, Johnnie and Arthur. Johnnie Ashe, a veteran of the Marine Corps, will be the keynote speaker at UCLA’s Veterans Day ceremony. (photo courtesy of Luchia Ashe)

In many ways, he rewrote what could have been a tragic alternative history.

When Johnnie Ashe returned from his first tour of duty from Vietnam as a Marine in 1967, it triggered a plan in his mind that few people — not even his brother — initially knew about. Five years younger than his brother, tennis legend and UCLA alumnus Arthur Ashe, Johnnie idolized his brother and believed that Arthur’s future would be bigger than his own.

“When you grow up with a person, you can sometimes sense when there is a destiny involved with that person’s life,” Johnnie Ashe said. “I always thought Arthur had a destiny far above the norm.”

So shortly after returning from his first tour, Johnnie reversed course and returned to Vietnam. By voluntarily going back to the war zone, he ensured that Arthur would never have to go to war because of a government policy against sending brothers to war at the same time.

Johnnie’s action enabled Arthur, who had graduated from UCLA and was an Army officer assigned to West Point at the time, to stay on his path, one that would lead him to win the inaugural U.S. Open in 1968 and break many athletic barriers during his Hall of Fame career. Arthur Ashe died in February 1993.

Johnnie Ashe will be the keynote speaker at UCLA’s Veterans Day ceremony Thursday, Nov. 10, at 10:30 a.m. at Wilson Plaza. He will be joined by the campus community, campus ROTC units and a fellow veteran who will also speak, UCLA M.F.A. student Mitchell LaFortune. An information fair about opportunities and resources for veterans and the Warrior Games will follow the event.

Johnnie recalls that their family always felt a strong bond to service. Two of his uncles were in the Marine Corps — one was among the first 20,000 ever to serve in that branch of the military. “I decided to go into the corps right out of high school, knowing that there was a possibility of going to Vietnam,” he said.

While he attended UCLA, Arthur was in the campus ROTC program. When Johnnie decided to go back to Vietnam for a second tour of duty, Arthur was a lieutenant in the Army working at West Point in data processing, while also focusing on his burgeoning tennis career.

“My Uncle Rudy used to tell us how tough [the Marine Corps] was, and how it can make you a man,” Johnnie recalled. “During that period, I was either going to get caught up in the draft, or I could join some service on my own.”

So he joined the Marines in June 1965 and deployed in August 1966 to Southeast Asia. 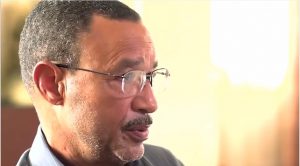 “If I had come back when I was supposed to, Arthur would have had 14 to 15 months left on his enlistment, which was enough time for him to go to Vietnam,” Johnnie said. “This was my idea, totally my idea. I didn’t talk to anyone about it. I told them (the Marine Corps) I would do it because of the possibilities Arthur represented.

“The other side of Arthur — tennis is what he did for a living — was a person who was a man all his own, with a lot of ideas and a drive about himself that was hard to explain. … From the conversations we had, from the things he did naturally, from the way he carried and handled himself with people, he was different. He was a very deep thinker. He never wasted any time.”

So Johnnie looked at what he could do to help and made his decision to return to the war.

“I just felt that there were too many possibilities for his life to be deterred by a tour in Vietnam. He didn’t need to go to war. Arthur was a very strong-willed man, but he was also a gentle spirit. And I didn’t want the experience of war to change that.”

Johnnie, on the other hand, was considered a hard head “because I was rough. A lot of it had to with the way Arthur and I grew up. I tell people all the time that our father was the best drill instructor we ever had.”

The only person Johnnie told about his real motives to return to Vietnam was his father. He said he thinks that later on his father must have told Arthur, but the two siblings didn’t discuss Johnnie’s sacrifice until 18 years later in 1985. After the war, Johnnie continued his Marine Corps career and became a company commander in the 1980s. 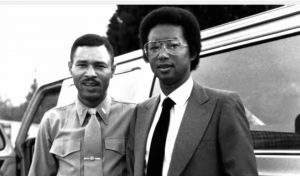 The rights he fought for are very important to his belief in service, he emphasized.

“If people could walk the streets, protest and die for my right to vote, then I was man enough to be one of those who would ensure that every man had a right to vote,” he said, before calling to mind something Martin Luther King Jr. said. “No men are free until all men are free. There was absolutely no way that Dr. Martin Luther King Jr. and those who followed him could have done what they did if young African-Americans had refused to go into the military,” he added.

It’s these virtues that have carried him forward.

“You keep that for life — you always have that,” Johnnie said. “I have always felt that sacrifice is something you learn, and you learn it by virtue of having done it for a reason.”

A screening of “Arthur and Johnnie,” the short, Emmy-nominated documentary about Johnnie’s decision made for the ESPN series, “30 for 30,” will be held at to the Calfornia NanoSystems Institute auditorium Wednesday, Nov. 9, at 5 p.m. along with a panel discussion and reception. To attend, RSVP for the event.

A special Fiat Lux seminar, “Arthur Ashe and the Second Half of the 20th Century,” is currently being taught at UCLA by Dean and Vice Provost of Undergraduate Education Patricia Turner, a scholar in African-American history.

Join Chancellor Gene Block and other members of the UCLA community at 10:30 a.m. Thursday, Nov. 10, in Wilson Plaza to celebrate Veterans Day and honor the many Bruins who have served or are training to serve in the United States Armed Forces.