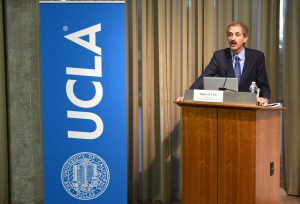 Since gun violence struck the UCLA campus in June, the greater university community has worked to come together to discuss how to prevent gun violence, and if it should happen again, how to be better prepared for it. On Thursday, a group of lawmakers, police officers and students participated in a forum to talk about these issues.

“We’re here to talk about gun violence on a campus that has experienced it,” said Los Angeles City Attorney Mike Feuer, who organized the Gun Violence and Campus Safety forum held at Young Research Library. “We are really able to look at this as a real life situation that could confront us any day.”

Nearly everyone who spoke had an anecdote about what he or she was doing the day of the shooting and its impact.

“When the gun violence incident took place, [my wife was scheduled to be] on campus doing some workforce training,” said Fifth District Councilman Paul Koretz. “I raced over here when the incident happened, and I was able to witness an incredible rallying of law enforcement from UCLA PD to LAPD, FBI, Beverly Hills PD and other entities. It was well-run and a very aggressive response.” 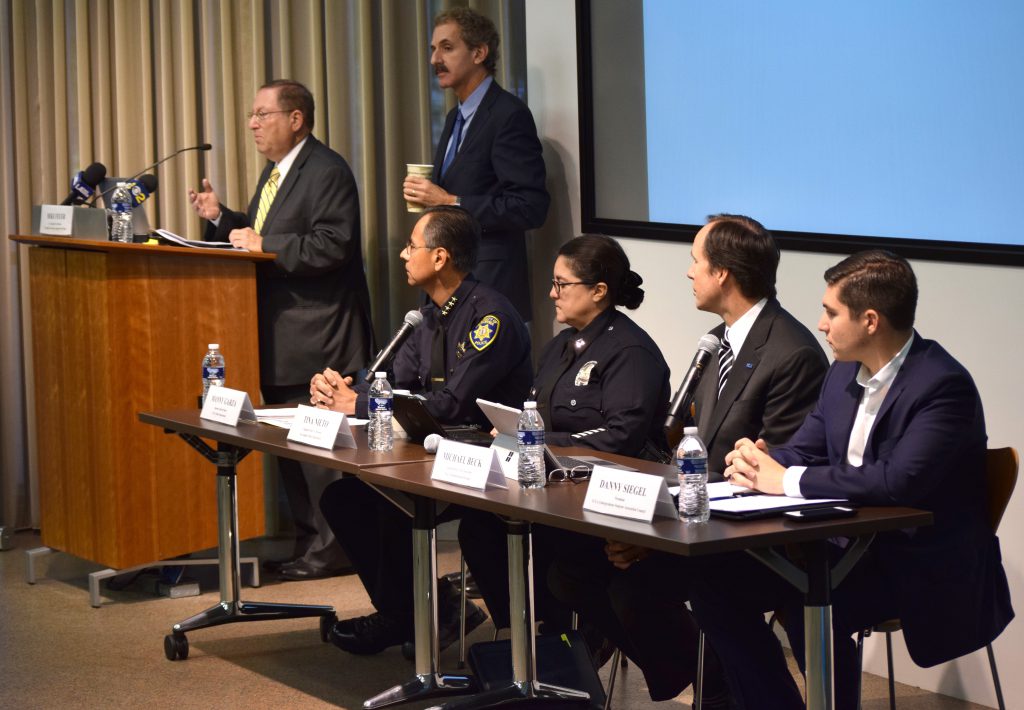 UCLA student and president of the Undergraduate Students Association Danny Siegel said he didn’t think that something like this would ever happen on this campus — until it did. “This is something you can never prepare for, something you can’t even fathom,” he added.

But despite that, Siegel said, staff and police have worked hard since then to implement best new practices and policies. 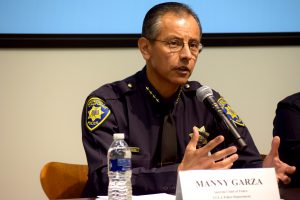 LAPD West Division Captain Tina Nieto said her department looked at several different courses of action in the aftermath: educating the public; changes in legislation, policies and gun control procedures; and an examination of how police react to these incidents.

“We are the leaders when it comes to these policies. However, there is still a lot of work that needs to be done,” Nieto said, adding that community partnerships are the most important factor when responding to a shooting. “This wasn’t the first day we met each other. We have to maintain these partnerships and talk about things in order to make sure we can resolve these things quickly for our communities and restore some normalcy.”

“Unfortunately, it’s been one of our most sought-after presentations since the June incident,” Garza said.

Nieto added that the five local universities have been in talks to debrief and learn from the June shooting. There were between 300 and 500 police officers responding to the incident, which can make for tricky organization. But, she said, “We have to prepare, we can’t get complacent.” 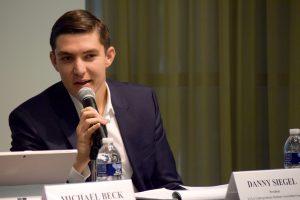 Within the university, there is now more emphasis on identifying individuals who could be suffering from serious mental health issues before something goes wrong, said Administrative Vice Chancellor Michael Beck.

Officials have studied campus facilities and systems with an eye toward improving responses, while at the same time maintaining an open environment — vital to a university campus — and striking a balance between security and privacy. The administration continues to emphasize to students to “see something — say something” to help keep the campus safe. They are also working with the special National Education Safety and Security Institute that is housed on campus.

Asked whether arming more people on campus would help, all panelists rejected the notion.

“We don’t believe that arming our students, faculty or staff — besides the police department — is an appropriate solution to respond to the risk of gun violence,” Beck said, adding that it was highly unlikely that any civilian would have gone through comparable LAPD firearm training.

Garza agreed. “I don’t see that as a comfortable way to run a university — having firearms on campus.” Nieto added that eyewitness accounts of others armed with guns make it more difficult to deescalate a situation. 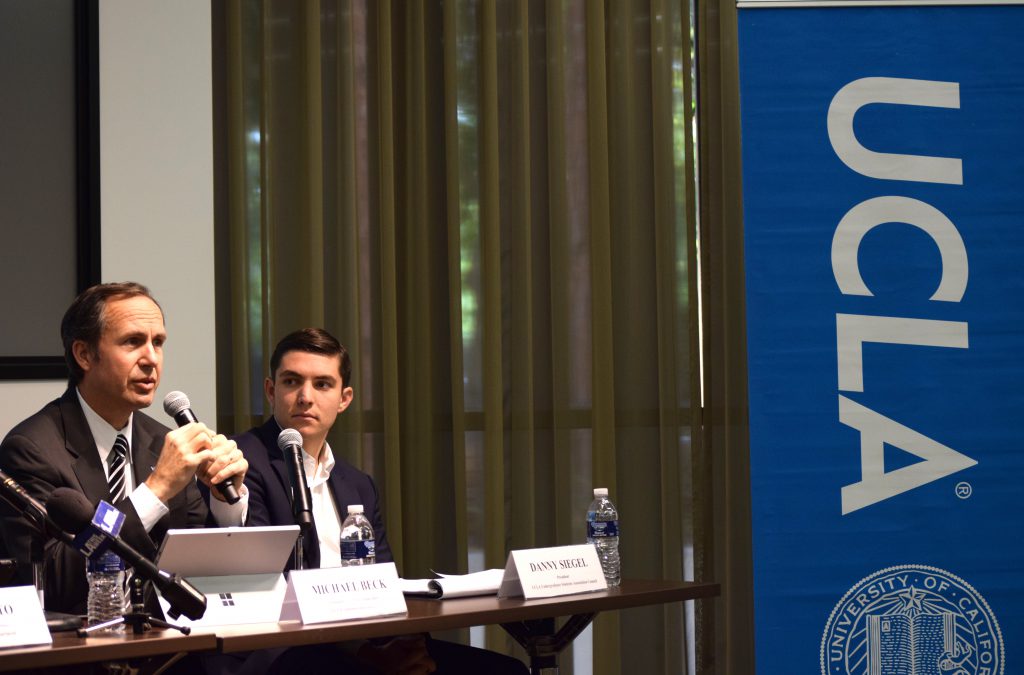 Administrative Vice Chancellor Michael Beck discussed the changes UCLA has made since June.

Siegel characterized students on campus as “resilient,” and praised them for coming together to honor the fallen, and then work toward gun violence prevention in the aftermath. Specifically, USAC was part of a big push to have the California legislature budget $5 million for a UC center for studying gun violence; the center will be housed at UC Davis. The USAC president also noted that working with the campus task force created after the shooting has also been a good experience.

“In the development of these new policies, students were an integral part,” he added. 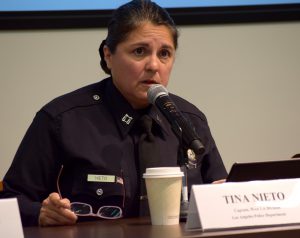 LAPD West Division Captain Tina Nieto noted the importance of collaboration between police and the community.

A BruinAlert replacement was initiated before the June 1 incident and was launched before the fall quarter, Beck said, noting that about 500,000 messages were sent over the scope of the two-hour shooting. He said the response in the first 20 minutes was “exceptional,” but improvements could be made — specifically there was too much lag, 91 minutes, between the second to the third message.

Beck also said that the door-locking policy is being examined and changed after reports of people having difficulty locking their classroom doors from the inside. Today, about 90 percent of general assignment classrooms are manually lockable, and the balance will be completed before the end of the year.

Former Los Angeles County Supervisor Zev Yaroslavsky, who is now teaching at UCLA, took time as an audience member to commend the university’s communications system during the shooting, adding that it was “incredibly effective and efficient” and compare favorably with the county’s system.

“I had more information from the campus communications system in the first 20 minutes of the incident before I saw something about it on CNN or local television.” 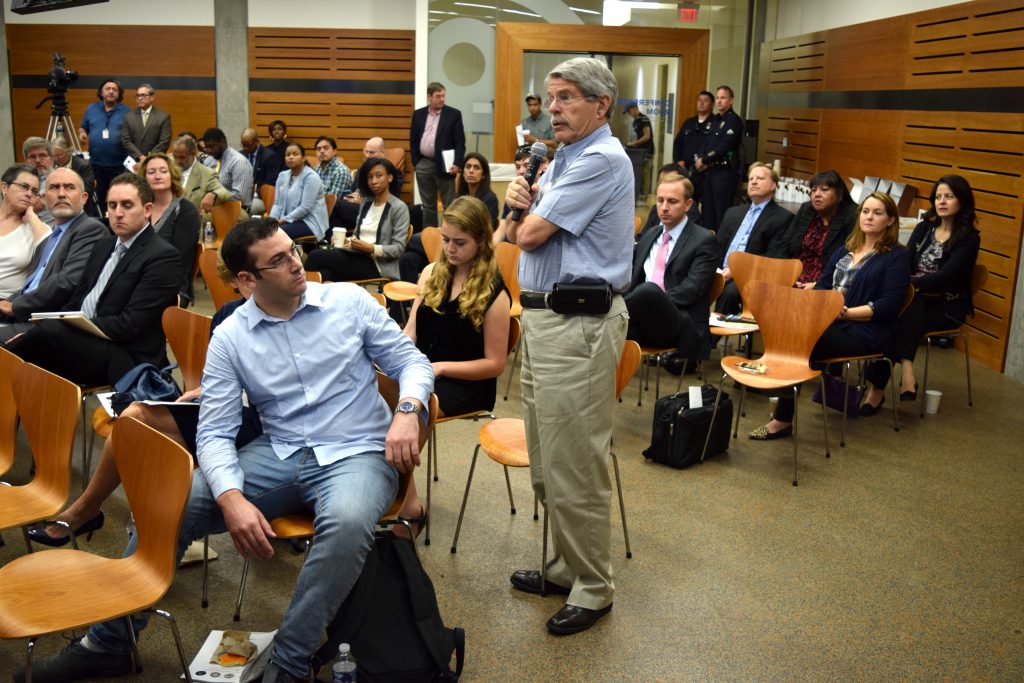 Feuer noted that there was plenty of work still to be done, and that Los Angeles is ahead of the curve in many ways.

“It’s much better to prevent an incident than to have victims later on whose rights we need to vindicate,” he added.

Koretz agreed. “This is a critical, critical issue. We have a deep obligation to try.” 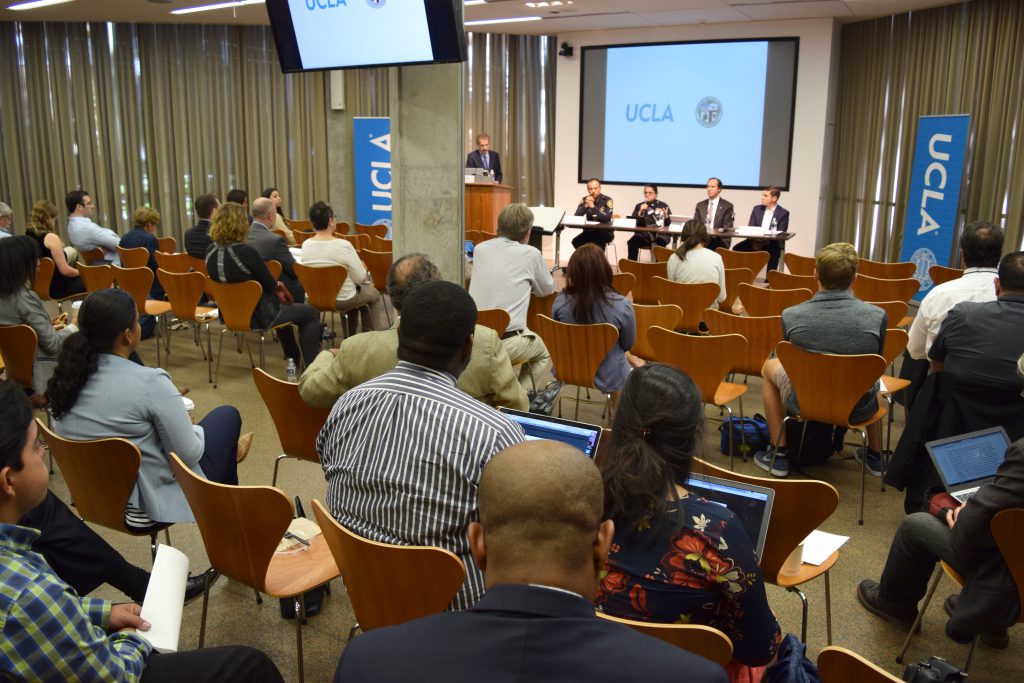