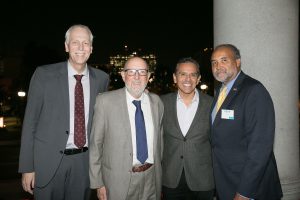 The UCLA in Downtown Los Angeles reception was the culmination of three weeks of local advocacy efforts by students, faculty, staff and alumni who traveled across the county to city council and county supervisor offices. All in all, UCLA has more than 200 programs that work with more than 1,200 community partners.

“Being in a public institution, all of our students — all of us — should have a public sense of purpose, and we should take these opportunities to work with the community, and to actually strengthen those values,” Chancellor Gene Block said to the crowd. “They contribute to the well-being of our city and are an essential part of what makes UCLA, UCLA.”

Earlier, elected officials such as city councilmembers Paul Koretz and David Ryu could be seen rubbing elbows with the likes of Mark Gold, UCLA associate vice chancellor for environment and sustainability, while Kent Wong, director of the UCLA Labor Center, chatted with Assemblyman Richard Bloom.

“All of us at UCLA are proud of the work we’re doing in Los Angeles to make it a more livable place,” Block said. “We all live in this wonderful city and we’re dedicated to doing our part.”

Block pointed to myriad UCLA-government partnerships including working with the Los Angeles Department of Water and Power to improve solar programs, creating parklets in dense urban areas and sending out scores of medical students to offer preventive care to stave off hypertension and diabetes. “We’re very proud of the impact our students make,” he added. 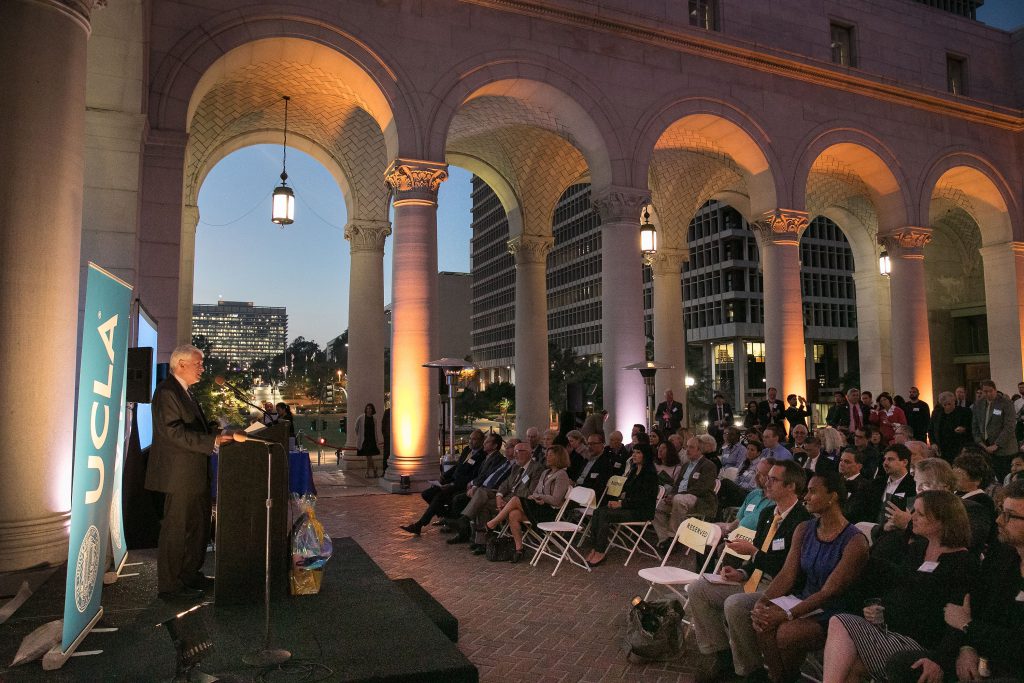 “When you are a Bruin, you can’t help but care,” said Christine Simmons, who is president of the UCLA Alumni Board and president and COO of the Los Angeles Sparks WNBA team. “It’s what ties us together, the aspect of our character and what we take beyond Westwood.” She noted that more than 187,000 UCLA alumni call the city home.

“How could I not be here when it comes to my alma mater,” said Antonio Villaraigosa, noting how far the university has come in the last decade as far as connecting to the city. “I couldn’t be prouder of the relationship that UCLA has with the city, county and this region.”

The former mayor was on hand to pay respects to this year’s UCLA Advocate of the Year, Howard Welinsky (for whom the award will be named in future years) and the Tom Bradley Local Leader of the Year, Larry Frank, who is president of Los Angeles Trade Technical College near downtown. 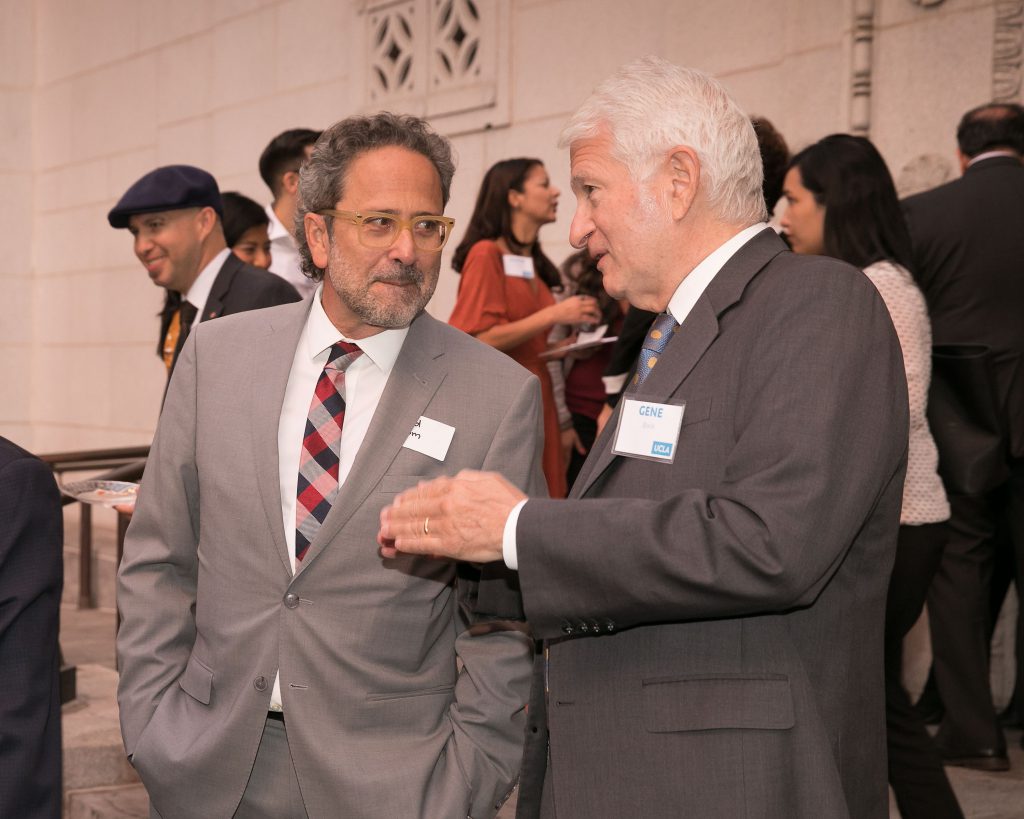 “Our advocates — and our advocate of the year — are very important to us because our job as government relations professionals — as Bruins in the larger community — we wouldn’t be so effective if we didn’t have those strong advocates,”  said Keith Parker, UCLA assistant vice chancellor of government and community relations.

“It’s so profound to receive this award,” said Frank, who led the partnering effort that included UCLA and locally elected officials to secure the SLATE-Z Promise Zone. “I aim to do [Tom Bradley] proud and I aim to do UCLA proud, and further that relationship between UCLA and the community.”

Awards were also given to the Social Enterprise Academy (Catalyst Program of the Year) andCommunity Scholars (Landmark Program of the Year) programs for their efforts in the community — the former is five years old, and the latter is celebrating 25 years of making a difference in Los Angeles. 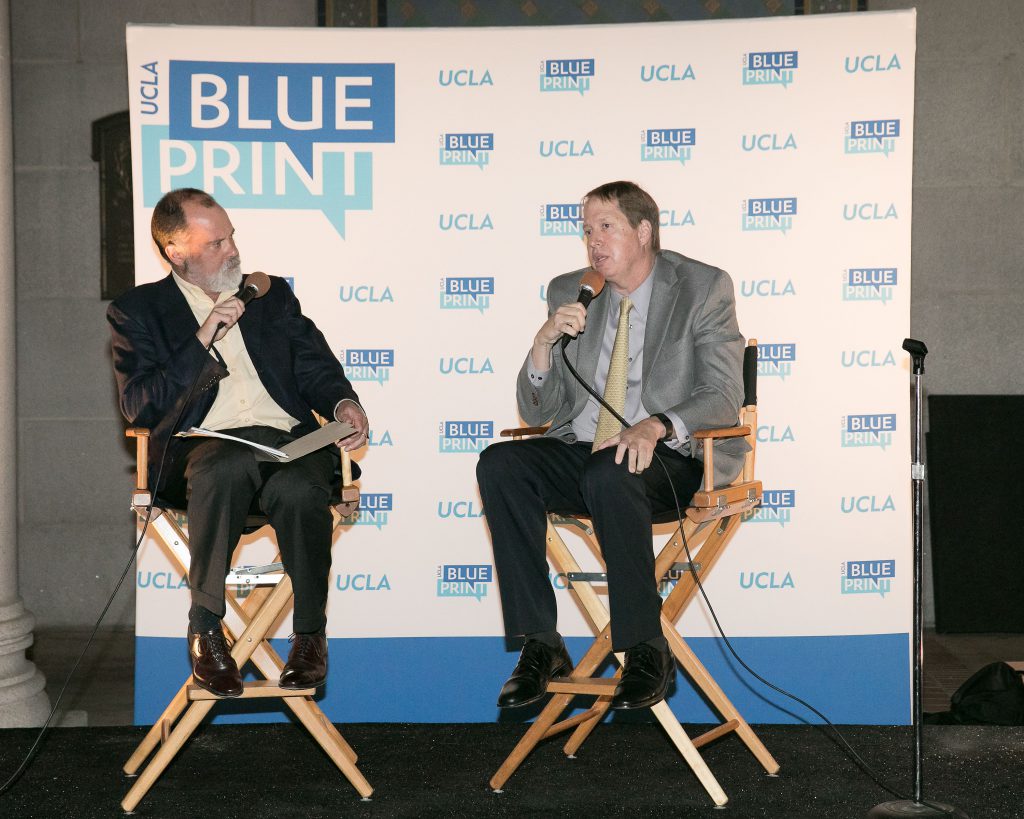 The night wound down with a special UCLA Blueprint conversation between editor-in-chief Jim Newton, who is a lecturer in public policy at the UCLA Luskin School of Public Affairs, and Gold, who directs the Sustainable LA Grand Challenge. The Grand Challenge has a goal of shifting the county to 100 percent renewable energy, 100 percent local water and enhanced ecosystem health by midcentury — something that can only be done through the partnerships taking place in the crowd, Newton said. “You are the people we are trying to reach.”

“It really takes the strength of UCLA and all of its incredible diversity and expertise across campus, whether it’s the biology department, engineering, law school, business school, and everyone in between,” Gold added. “It starts off with our expertise and doing research, and working with students to really try and make a difference in our own community.”