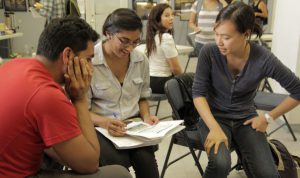 When the Community Scholars program convenes each year, the program’s impact doesn’t come to an end upon the handing in of research initiatives and reports.

Launched in 1991 and sponsored by the UCLA Labor Center and Department of Urban Planning, Community Scholars has now provided 25 years of opportunities to inspire social justice, and provide groundbreaking reports in support of economic justice. Students troubleshoot, in class, various and immediate topics taking place across the city and pair with local practitioners, activists and community leaders to develop actionable research and plans.

“It’s not just, OK, a report gets generated, used to some extent, and then that is the end of the story,” said Chris Tilly, program director and urban planning professor.

Community Scholars instead has led to long-term changes in the Los Angeles community through a number of avenues. For example, leading economic justice organization Los Angeles Alliance for a New Economy was formed from a Community Scholars project. Another class’ research on green jobs helped the city with the implementation of an ordinance that created the Los Angeles Green Retrofit and Workforce program to retrofit buildings across the city while creating jobs.

“There’s always some economic aspect of the focus, and usually something involving jobs,” Tilly said.

Often the program will go broader, concentrating on major topics such as transportation, urban design and the environment. A recent class examined the ports of Los Angeles and Long Beach, taking into account labor, environmental and transportation dimensions for goods movement. This year’s class is examining South Los Angeles and the African American community who lives there — specifically what is taking place about land development, gentrification, disinvestment, employment and jobs access.

“We look at what would be a timely topic that would engage students and interest the community,” said Tilly, adding that labor center staff brainstorm with urban planning faculty to come up with a topic.

“At this point we have a 25-year track record so it’s not hard to have community organizations say they want to be involved,” he added.

Tilly believes there are four tenets to the success of the program. For graduate students, the planning experience becomes invaluable, especially while working with community professionals and modeling after them.

The term Community Scholars refers to the practitioners and activist partners who become involved through civic duty and concern.

“Having them in the classroom is an incredible benefit to the students,” Tilly said. “These are people with practical knowledge and they are in the community. It helps the university build a stronger network and community.”

The third benefit is the most obvious — Community Scholars generates concrete products and reports on an issue Los Angeles is struggling with. This could include visuals, maps, renderings or even educational games.

“It can become a research resource or source of something that otherwise wouldn’t be documented,” Tilly said, before moving to the fourth. “Ideally there is some impact on the problem the community identifies. I can’t say there’s always a huge impact, but there is always something that can last long term.”

It has been nice to celebrate the program during its 25th anniversary, organizers said. The program has been recognizing its founding director, Gilda Haas, and paying tribute to the invaluable contributions of the late Jacqueline Leavitt — urban planning professor, Haas’ collaborator, and director until 2015.

Community Scholars is the recipient of the UCLA Landmark Program of the Year award at UCLA Day in Downtown, which honors projects that strongly impact the Greater Los Angeles Community for more than five years.

“We’re really excited and honored to get this kind of recognition,” Tilly said. “It’s particularly humbling to receive the recognition on this special anniversary.”