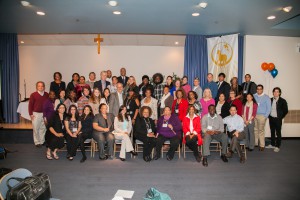 Depression is a burden nobody should have to face alone, and through Community Partners in Care, it doesn’t have to be.

The program, established through the UCLA David Geffen School of Medicine and RAND, links key mental health and depression training through community agencies and outlets — literally from the barbershop to the primary care physician. The program particularly focuses on areas populated with ethnic minorities, a population that is more likely to struggle with the stigmatization of mental health issues and depression. 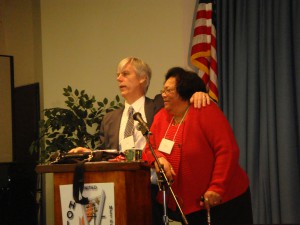 Dr. Kenneth Wells and Loretta Jones are part of the team spearheading Community Partners in Care.

CPIC began as the Witness for Wellness Initiative, which concentrated on special training for primary care physicians. Evidence also began to mount that a more comprehensive community approach could work even better, leading to CPIC’s creation.

“The community engagement model was better at improving quality of life measures, increasing exercise, reducing homelessness and food insecurity,” said Dr. Kenneth Wells, CPIC director. “It cut hospitalizations in half, which got policy makers attention, and it expanded the range of services offered in the community.”

CPIC works in Hollywood, downtown and South Los Angeles. One of its major community partners is Healthy African American Families (HAAF), an organization with a long history of finding ways to provide much needed health services in underserved communities. CPIC is

“Communities didn’t even want to hear the word depression, let alone receive any information on it,” HAAF director Felica Jones said. “But we know if we can get people healthy mentally, then we can decrease homelessness, joblessness and then secure housing and better personal care. They feel better about themselves and can do better for themselves. They are more likely to receive the information from someone they trust in the community, and the community was at the planning table.”

“We made sure there wasn’t a top-down approach, but an equal partnership,” Jones said.

By giving even a small amount of mental health and depression-identification training to people in the community, it helps ever so gradually lighten the stigma surrounding depression, Wells said.

“You actually changed where people were getting care,” he added. “We included all these trusted locations and trained the people for dealing with depression. It’s not like they became therapists, but they learned to engage depressed people and how to help with social services.”

For example, a lead trainer at a senior center would now have the capacity to pursue his or her concerns about an elderly participation student not coming to a fitness class.

“So then, when they go back to their exercise class, they can outreach someone who has missed several sessions because they are depressed, and they could make a referral,” Wells said. “Or if someone still comes, but appears listless, they could help them take small steps toward getting better.”

That trainer has likely co-trained with a primary care nurse — so it furthers the personal connection from the depressed, to the trainer, and now a trusted person in primary health care. A gap not often previously bridged.

Wells said that as many as 18 percent of the people who went to the barbershops and faith-based organizations were depressed. That number jumped to as high as 50 percent at mental health agencies in the areas studied.

The CPIC program is now coming to a point where it can report on three-year outcomes. Public policymakers have taken notice — the Los Angeles County Board of Supervisors approved a new Health Neighborhood Initiative for eight to 10 neighborhoods in the county as a pilot program that mirrors CPIC but takes it to a broader and more comprehensive level. CPIC has also worked extensively with the West Los Angeles VA to program there.

CPIC researchers aren’t researching and running, Jones said, but instead creating a lasting partnership while sharing the research and results with the community that is impacted.

“I think this has broken down stereotypes of what depression looks like in our community,” Jones said. “And brought awareness that we can all get better.”

On Thursday, October 8, CPIC will be given the Landmark Program of the Year award at UCLA Day in Downtown for its efforts in the Greater Los Angeles Community.