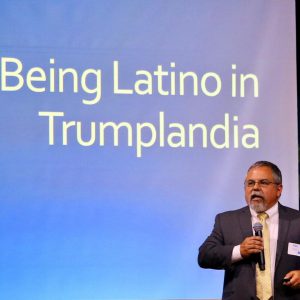 UCLA Luskin Dean Gary Segura talks about the impact of the presidential election on Latinos. Photo by George Foulsham

Gary Segura, dean of the UCLA Luskin School of Public Affairs, thinks that Donald Trump’s anti-immigrant rhetoric may seem all too familiar to Latinos and others in California who endured a similar campaign against undocumented residents a couple of decades ago. The current effort could backfire on Trump and his supporters, suggested Segura, an internationally recognized expert on the Latino electorate, during a presentation March 21, 2017, to a packed room of citizens, policymakers and fellow educators. The UCLA Advocacy event, co-hosted by UCLA Government and Community Relations and the Luskin School, featured introductions by Chancellor Gene Block and Keith S. Parker, assistant vice chancellor for government and community relations.

Segura reminded the crowd at Cross Campus in downtown Los Angeles that a GOP-backed ballot initiative in 1994 known as Proposition 187 sought to establish a citizenship screening system in California and prohibit undocumented immigrants from using many public services. It passed, but soon was found unconstitutional and never took effect. The lasting result? “It created a tidal wave of Latino registrants” that tipped the balance in California elections strongly toward Democrats. “It’s known as the Prop. 187 phenomenon,” Segura told the enthusiastic audience of more than 100. “What’s less known is that between 1980 and 1994, if you looked at the California Field Poll, the share of Latinos identifying as Republican went up in every year,” Segura noted. Latino voters had been trending toward the Republican party for a decade and a half before Proposition 187 sent waves of Latinos to the Democratic side. For the GOP, the measure amounted to “snatching defeat from the jaws of victory,” he said. It’s too soon, of course, to know whether California’s pivot away from anti-immigrant policies will repeat itself nationwide. But providing this type of perspective about modern-day political controversies is an important role that Segura has embraced as the recently installed dean at UCLA Luskin. “It’s a dazzling school that needs extraordinary leadership, and that’s what we have here,” Block said of Segura during his introductory remarks. The event served as a first opportunity for many of those in attendance to meet and hear from Segura, who relocated to Los Angeles in January after serving as a professor of political science and former chair of Chicana/o-Latina studies at Stanford University. “We are introducing a true partner with Government and Community Relations and the university’s greater engagement with Los Angeles,” Parker said. “When Chancellor Block came to UCLA, one of his priorities was to increase our engagement with Los Angeles. In our discussions with Dean Gary Segura, that’s one of his priorities as well.” A widely published author and a frequent interviewee by print and broadcast news outlets, Segura is also a principal partner in the political research firm Latino Decisions. His presentation, formally titled “Population Change and Latino Prospects in the New Era” but sarcastically dubbed by Segura as “Being Latino in Trumplandia,” drew heavily from polling results and other research gathered by Latino Decisions. “Latinos became deeply involved in this election in a way that they had never been in the past,” Segura said. “This was their highest level of turnout.” Segura said this fact strongly refutes a narrative picked up by several media outlets based on an Election Day exit poll. That poll showed more Latinos voting for Trump than would have been expected given his anti-Latino rhetoric, including repeated calls to build a wall along the U.S.-Mexico border. 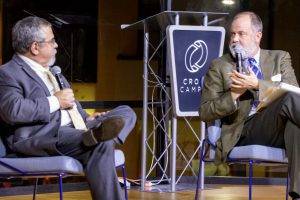 “There is not a shred of statistical evidence consistent with the exit poll,” Segura said. “In fact, precinct analysis shows that Latinos actually voted more Democratic than they have in past elections. From actual precinct data, we estimate that Donald Trump won about 18 percent of the Latino vote,” not the 29 percent shown by the exit poll. Results in other races also belie the presidential results, Segura said, noting that Latino voters were critical in electing a record number of Latinos to Congress. “The Latino surge was real,” Segura said. “There’s lots of evidence for this. And, nationally, we estimate that about 51 percent of eligible Latinos cast a ballot, up from the last two elections.” The political views of most of those Latino voters are at odds with the conservative policies of the Trump administration, Segura said. Polling of Latinos regarding issues such as gun registration, equal pay for women, higher minimum wages and climate change consistently lean toward a liberal viewpoint. At this point, those views do not hold sway in Washington. The right-wing — mostly Anglo voters who tipped the 2016 presidential race to Trump — tends to be an older demographic, Segura explained. But Latinos are younger, and fewer are registered to vote. “That’s a disadvantage, but it’s also an opportunity. Latino advocates could, in fact, mobilize more voters.” In 2016, 27 million Latinos were eligible to cast a vote, and it’s estimated that about 14 million were registered to do so. If Latinos had the same registration rate as whites and African Americans (roughly 70 percent), then 19 million would have been registered voters. That’s 5 million additional Latino voters. And the country’s evolving demographics ¾ fed primarily by Latino birth rates, not immigration, Segura noted ¾ will continue to swell that potential voter pool. “The number that it is important for you to leave here with tonight is that 93 percent of Latino residents under age 18 are citizens of the United States,” Segura told the gathering, which included prominent Latino officials such as UC Regents John A. Perez and J. Alberto Lemus, as well as Francisco Rodriguez, chancellor of the L.A. Community College District. “What that means is the passage of time alone will dramatically enlarge the Latino electorate. The Latino electorate will double in the next 20 years,” Segura said, citing estimates that 73,000 Latino citizens turn 18 and enter the eligible electorate every month. During a question-and-answer session that followed his talk, Segura was asked by moderator and UCLA Luskin lecturer Jim Newton to address the fact that such statistics are seen as threatening by many Americans, particularly in rural America where lower-income white voters helped sway the election to Trump. Segura expressed sympathy for those voters, acknowledging the legitimate concerns of people in communities hit hard by job losses. “That pain is real,” but he said it’s wrong to blame illegal immigration for the country’s economic problems. “They are being told that reality is being caused by someone else. The actual evidence suggests that there is very little labor market replacement between Latin American immigrants to the United States and native-born U.S. workers.” There are some historical exceptions, such as in the textile industry, “but as a large-scale measure, immigration really has very little to do with labor market turnover in the United States,” Segura said. Newton also asked Segura to talk about whether the immigration issue is really of much importance to most Latinos voters. They are U.S. citizens, after all. Like other voters, aren’t they more concerned about crime, good schools and jobs? “All of those statements are true, but the conclusion is incorrect ¾ that immigration doesn’t matter,” Segura responded. “Both parties have gotten this wrong because they don’t understand that Latino families are mixed status. You might be a born citizen of the United States. Your wife might be naturalized. But your brother-in-law might be undocumented.” In polls of Latino voters conducted by Segura and Latino Decisions, one-quarter of respondents know someone who has been detained or deported. “And 60 percent of Latinos who are registered voters know someone who is undocumented. In more than half of those cases, that person is a relative of theirs.” Segura noted that “86 percent of all U.S. Latinos are within two generations of the immigration experience. So when you talk badly about immigrants, you are talking about members of my immediate family.”