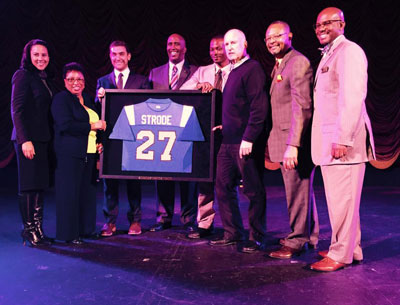 On February 10th, as part of Black History Month celebrations, the Legislative Black Caucus held a screening of the film, “The Forgotten Four.” The film is about the integration of the National Football League in 1946 by four African American players. Kenny Washington and Woody Strode played for the Los Angeles Rams and Marion Motley and Bill Willis played for the Cleveland Browns. Both Kenny Washington and Woody Strode were UCLA alumni and played on the same UCLA football team with Jackie Robinson.

Assemblymember Cheryl Brown, the host of the film screening, has nominated Woody Strode for the California Hall of Fame in honor for his athletic prowess, acting career and life long philanthropy. Governor Jerry Brown was presented with the number 27 UCLA jersey commemorating Woody Strode, which he wore while at UCLA.