Graduate preps for the next step

Aurelia Friedman enjoys getting caught in the middle of a good debate.

The newly minted graduate, who will take part in three commencement ceremonies this month, made it a priority during her time at UCLA to help bridge the gap between disparate parties on a number of subjects, especially political hot-button issues involving students and UC administrators. 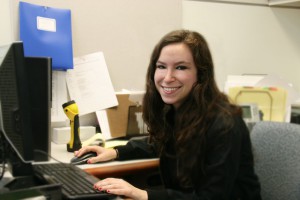 “I was trying this entire new year to minimize that impasse between administration and student,” she said. “I think there is a lot of misunderstanding between both sides. I tried to be the middle man.”

Friedman is wrapping up a busy tenure as an intern for UCLA’s Government and Community Relations Office, supporting the State Relations Unit.

“I feel like I’m getting a lot of experience in terms of advocating for something I care about, and dealing with different parties and interests,” she said. “A lot of people could have the same end goal, but they have a different way of getting there or different motivations. Advocacy is not necessarily where everyone is ready to jump on the cause.”

Friedman researched all angles of an issue (from the state budget to Israel-Palestine campus climate), presenting packets to her superiors so they would be prepared for anything.

“You kind of have to lobby your own advocates to be on board with you and at the end of the day everyone has different motivations for coming to the table with you,” she said. “But it’s more the coalition-building before the advocacy begins that is the most interesting part of the job.”

Now, she’s prepared to be an alumni advocate for UCLA, and encourages her fellow graduates to examine giving back in that way as well.

Friedman was active well before she arrived at UCLA. She previously served as a youth representative on the Pacific Palisades Community Council and she also worked in 11th District Councilman Bill Rosendahl’s office.

“From a very young age I was interested in serving the community and getting people involved and active in different causes that they might not feel a certain way toward,” Friedman said, noting her activism began in the Girl Scouts. “I always found connecting with people in that regard to be very motivating and interesting to me.”

More recently, Friedman interned for 54th District Assemblymember Sebastian Ridley-Thomas and served as the student director of the Westwood Neighborhood Council. She has interned for Government and Community Relations since September 2014.

“Being a college student is the first time you feel like the government has an actual say in how your life works — tuition, loans, student debt. These are issues that impact you day-to-day,” Friedman said. “Any opportunity to expand the student voice was something I was very interested in doing.”

Last year, she ran for Undergraduate Students Association Council (USAC) External Vice President, but did not receive enough votes to win. However, Friedman was far from discouraged.

“I ran to make sure the message was communicated that it’s okay to work with the administration and that it’s okay to advance certain causes if people believe in them,” Friedman said, offering a platform of inclusion. “I’m progressive and have a liberal background, but if someone was a conservative, I would want them to feel like they were being represented by the office that is the most political office in student government. That’s why I got involved with all of that. Even though I didn’t win, that fueled me to get this job [in Government and Community Relations].”

State Relations Executive Director Ramona Cortes Garza told Friedman she needed to walk away from the internship with a tangible sense of accomplishment.

“Aurelia has a lot of motivation and lots of tenacity,” Garza said. “She was the bridge to our campus student leaders. She connected us to the students and helped facilitate cooperation and communication.”

Garza said Friedman was especially helpful with her insight into the Jewish community issues impacting the campus and that she helped the office understand the issues from a student perspective.

Friedman said it was important for her to have students actively involved with an office that many hadn’t heard of, so she created UCLA Campus Climate Legislative Day.

A project Friedman spearheaded, the day-long event, sponsored by the office of Government and Community Relations and USAC, addressed important campus issues including college access and affordability, mental health, sexual assault, the LGBTQ community, the environment and academic diversity.

She said a major goal of the event was to actively and respectfully involve students with state issues, because often “students felt like they were being used as pawns easily moved in this chess game” of government advocacy.

Down the road, Friedman said she sees herself as a more boots-on-the-ground advocate — someone who is able to bridge the gap between constituents and legislators, or even as a fulltime advocate for what has become a very important topic to her — education.

To sign up as a UCLA advocate, visit https://advocacy.ucla.edu/bruincaucus/join/.