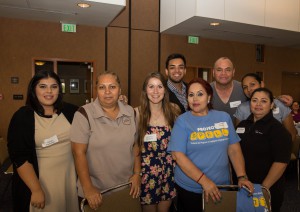 Third-year student Luzdelia Caballero (in floral dress) tutored Avelina Salcedo (blue T-shirt) in Project SPELL. They joined other participants at a graduation celebration on June 5.A

Although Avelina Salcedo came to this country from Mexico more than 30 years ago, she was not comfortable speaking in English at her job as a food service worker at UCLA’s Bruin Plate dining hall. “I was ashamed to talk, out of fear of saying something incorrect,” she admitted.

But all that has changed because of a campus program hosted by the UCLA Volunteer Center to help staff like Salcedo in Housing and Hospitality Services as well as in Facilities Management improve their English and computer literacy skills. “I am confident now,” Salcedo said proudly. And last Friday, June 5, she proved it by speaking in English in front of a crowd for the first time in her life.

Salcedo took command of the stage in De Neve Plaza at a graduation ceremony to extoll the merits of Project SPELL (Students for Progress in Employee Language Learning) and the dedication of her “awesome” tutor in the program, UCLA student Luzdelia Caballero. Salcedo was one of 81 Project SPELL participants in 2014-15 whose achievements were recognized and applauded at the gathering.

During the ceremony, the graduates shared dozens of stories about how their lives have changed in simple and significant ways.

“When I go home I can speak with my son because he speaks good English,” Salcedo explained. “Now I speak with him and can have a conversation with him. I can write letters now. Before, I was afraid to do it. Everything has changed.”

The program has benefited UCLA as well, administrators said. 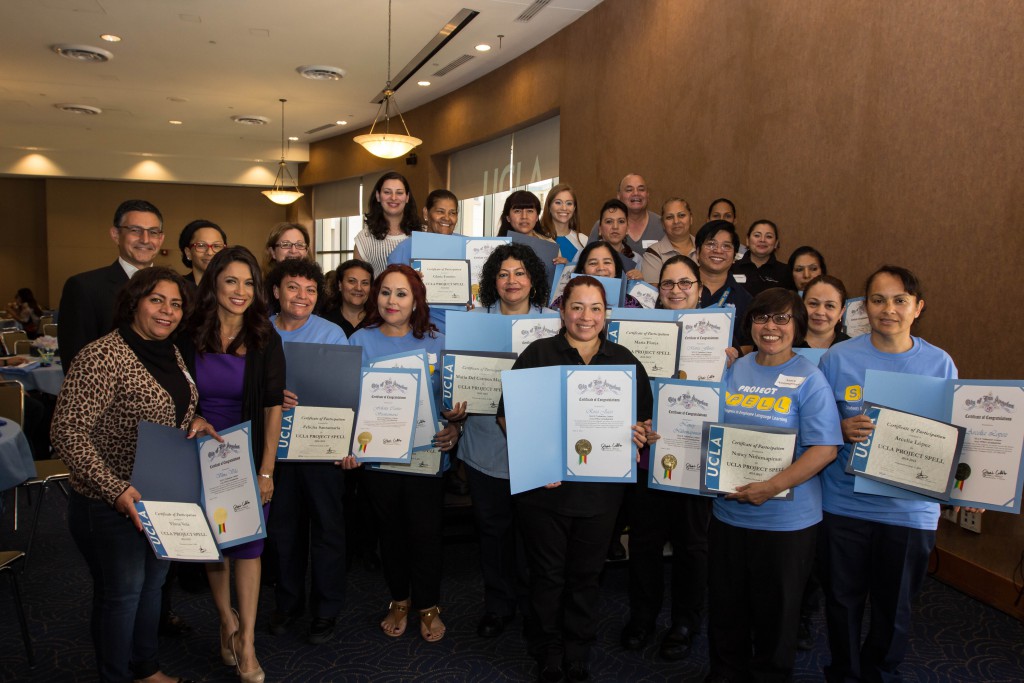 “Project SPELL has given our team members an opportunity to not only enhance their language skills, but also build their confidence in interacting with colleagues and customers at work,” said Housing and Hospitality Services Assistant Vice Chancellor Pete Angelis. “Learning to communicate with the self-assurance that they can be understood has a positive impact on the learners and has increased our team collaboration and sense of inclusion in the work environment.”

Workplace safety was the program’s initial goal when it started as a pilot project in 2009. Employees would be safer, the program’s creators reasoned, if they could better interact with their co-workers and supervisors and learn to read the labels, in English, of food, chemicals and other products they encounter daily in the workplace.

But the actual impact of Project SPELL has extended beyond employees’ specific jobs. During spring quarter, for example, the program put a heavy emphasis on computer literacy and health literacy. “A lot of our students really want to be able to talk to their doctor,” said Stephanie Youngblood, Project SPELL program director. But they also learned how to navigate a computer and send emails. “The program has expanded and grown a lot. We tailor it to each learner and what they want to learn. But the workplace always remains a central theme because this is where they use English the most.”

The major difference Youngblood said she sees in employees is a huge boost in confidence, as is the case for Salcedo. Employees may know English, “but they just have so much doubt that they don’t ever use it,” Youngblood said. “Working one-on-one with someone who really bonds with them and supports them and gives constant encouragement … makes all the difference in the world.”

Salcedo’s tutor, UCLA student volunteer Luzdelia Caballero, said she was drawn to the program because she didn’t learn English until she was 5 or 6.

“I know the struggle that wraps around learning a new language,” said Caballero, a third-year student. “I saw [Project SPELL] as an opportunity to give back…. I needed that [kind of] help and received it, so I wanted to give my learner that same opportunity to overcome that fear.”

To see her student on stage giving a speech that she had written herself “is extremely rewarding,” Caballero said. “She’s a highly driven individual.”

Other volunteer tutors echoed Caballero’s enthusiasm for the program. UCLA student Angelica Heredia, who’s graduating this week, said tutoring in the program was of the things she’s loved doing most during her four years at UCLA.

“Personally, it just makes me feel really good to know that I can help out in this way,” Heredia said. “It’s nice to see how every person in the program evolves in whatever manner that may be.”

Many employees described that evolution. “When I had to talk to my supervisor, I was embarrassed,” said custodian Santos Argueta, who is from El Salvador and has worked at UCLA for nine years. “And now I am more confident. I suggest this to my co-workers. It’s good for employees.”

Ana Gonzalez, a senior custodian, echoed many of the same sentiments as her Project SPELL colleagues. “I hope one day I will be working in an office, not cleaning the desk — but behind it,” she said confidently.

During the graduation, learners received accolades, along with recognition from Los Angeles City Council members Gil Cedillo and Jose Huizar. UCLA Administrative Vice Chancellor Jack Powazek, who is retiring after 41 years, was honored for his support of the program.

Dunia Elvir, host of the morning TV show “Noticiero Telemundo 52 a las 5am y 6am,” gave the keynote speech, drawing on her own experiences as an English learner.

“If you didn’t give up learning today, then you won’t give up going into tomorrow,” Elvir said. “This is the beginning of the next chapter.”