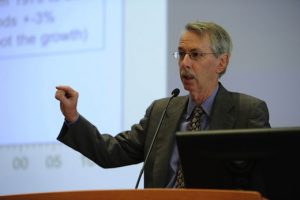 Professor Edward Leamer presents the UCLA Anderson Forecast, which came out most recently on June 13.

Elected officials up in Sacramento know that Director of the UCLA Anderson Forecast (released new June 13) Edward Leamer’s door is always open for a lively discussion.

“I think good citizenship is essential to a good university’s function,” Leamer said. “The faculty needs to do what it can to help the governance of the locales in which they reside — the city, the county and the state. I go up to Sacramento with that in mind. It’s an opportunity and an important function that’s really part of my job and also part of my activity of being a citizen of California.”

Most recently, Leamer met with the UC Legislative Roundtable, which includes members that represent either a UC campus or medical center. There, he outlined the most recent long-term economic forecast for both the state and the nation. 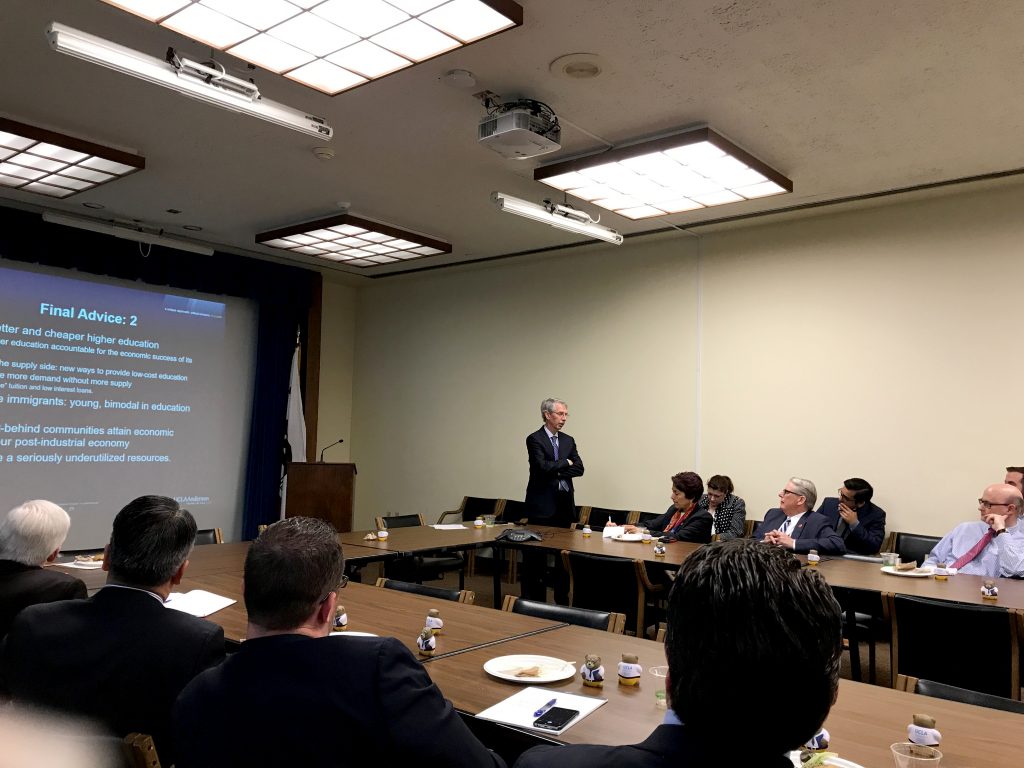 “I tried to leave the impression that the economy of the nation and the state are at a real juncture point,” he said. “Things have really, really changed and the state legislature would be wise to make their policy with that realization very friendly in their heads.

“I was not talking about a budget for the next two years, but trying to get them to think about what is going to make California great two decades from now. What can we do to ensure that success?”

One of Leamer’s keywords: frugality. “Back when Jerry Brown was governor the first time, jobs were growing at close to 4 percent a year and maybe 40 percent over a decade. So that meant you could make all sorts of commitments and they wouldn’t turn out unaffordable because the growth was so strong. But the last couple of decades, the California economy has grown much more slowly and they need to realize that is probably the new reality of the situation.”

The UCLA Anderson Forecast is released four times a year, most recently on Tuesday, June 13, and forecasts two years in advance. This either validates or contradicts the state’s Department of Finance’s own reports — which, either way, Leamer says can be an important tool for lawmakers.

“I feel the reception is excellent,” Leamer added of his visits to Sacramento and with legislators. “I think there is a kind of open mindedness that most of the legislators have in regards to my opinion. They may disagree but they listen quite intently to the messages I’m trying to get across. I’m not sure I’ve changed behavior, but I think I contribute to that conversation in a very positive way.”

Anyone is free to follow the UCLA Anderson Forecast at its website, which is updated with the new reports quarterly. Leamer is also a part of the California Policy Lab, which was founded about six months ago by various UCLA and UC Berkeley faculty members with a goal to support evidence-based public policy decisions.

The key in all of this, Leamer said, is to remain as an evidence-based and impartial resource, with an eye toward improving California economic growth, because “legislators jobs are more important than they ever have been.”