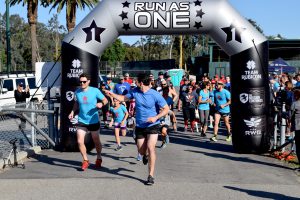 The Run As One 5K began at Jackie Robinson Stadium for the second year in a row. (all photos by Jonathan Van Dyke)

For Joe Thompson, the sight of so many veterans lined up for a morning run, jog or walk (with an assist from the occasional four-legged friend) was a sign that bringing veteran groups together was as needed as ever.

Thompson, membership coordinator for Team Rubicon, helped organize the Sixth Annual Run as One 5K on April 1, which began from Jackie Robinson Stadium, located on the campus of the West Los Angeles VA, for the second year in a row. The event is a collaborative effort between veteran organizations Team Rubicon, Mission Continues and Team Red, White and Blue. This year, Student Veterans Association (SVA) and Iraq and Afghanistan Veterans Association (IAVA) were also involved in the effort. There were approximately 150 veterans and civilians in attendance and more than 15 veterans-oriented vendors came to support and inform at the 5K.

“It’s a nice little three-loop course through the VA campus, and we had the VA outreach efforts here at the vendor village,” Thompson said. “It’s a great way for people to come out and find out about services they maybe didn’t know about.” 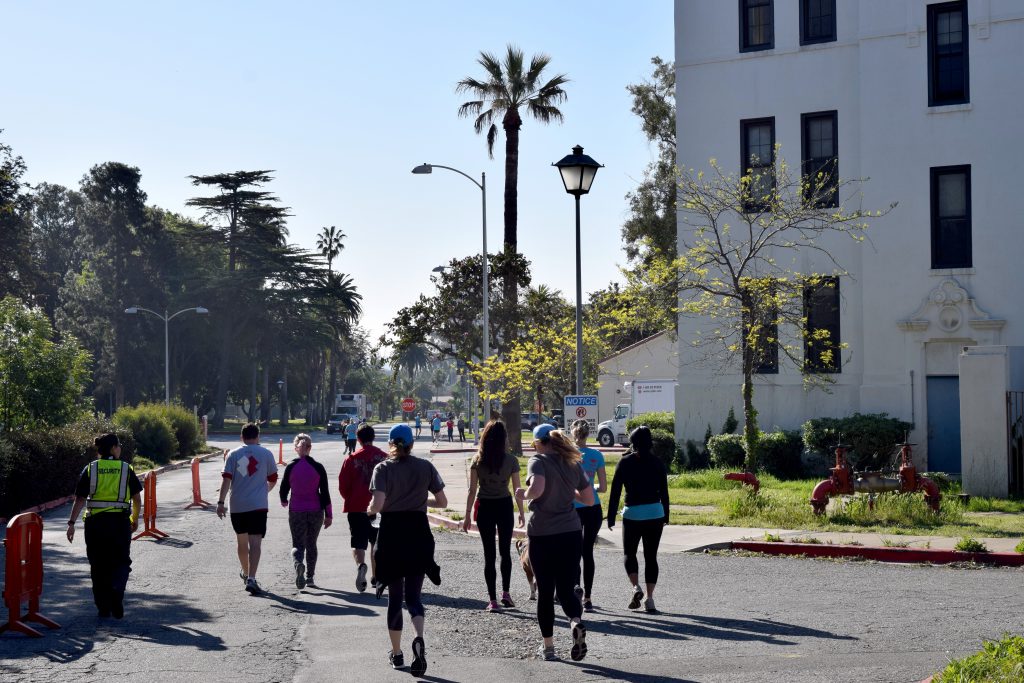 Beyond the local event, there were more than 170 locations around the world with more than 6,000 people engaged in a Run As One, organizers added.

The run was started to honor Team Rubicon member and Marine Corps veteran Clay Hunt and what his life stood for. “He was active in a lot of veterans organizations and he lost his battle with PTSD, so we run in his honor as a demonstration of collaborative support among veteran service organizations, and to help enrich, empower and unite veterans within the community,” Thompson added. 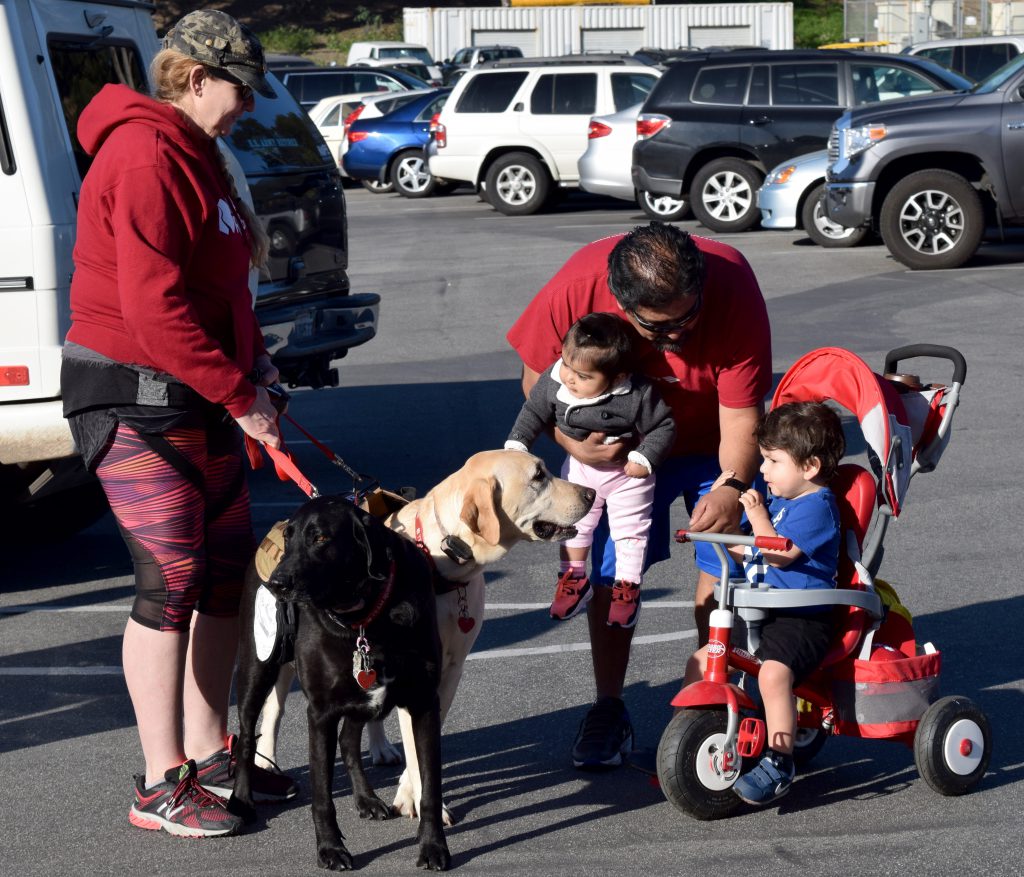 Dogs were popular running buddies during Run As One.

While the mission of the 5K is near to the hearts of its participants, they did try and have some fun while they were at it. Andrew Glenn, whose father was in the army for 22 years, lent his support as a de facto mascot — wearing an inflatable T-Rex costume for the first lap, before giving in to the heat. 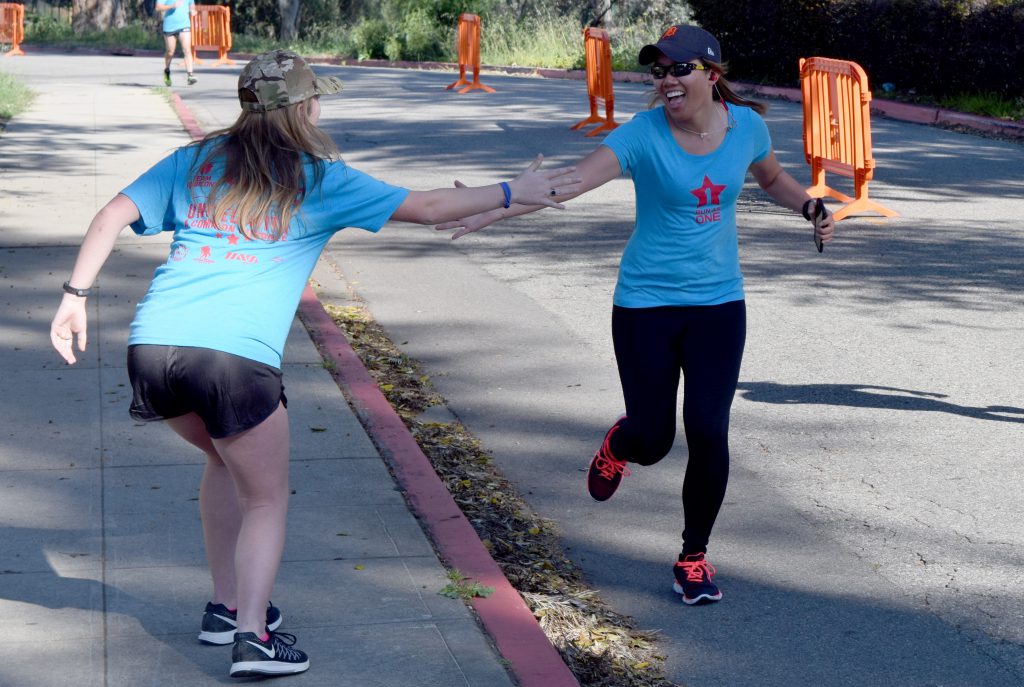 A little positive attitude pick-me-up down the final stretch.

“It was a great idea when it was just an idea two months ago,” he said with a laugh after the race. “It was surprisingly really hot in there and really foggy so I couldn’t see. I gave it a try, people got a kick out of it, and I tried not to die of heat exhaustion.”

The camaraderie of the event is important, he noted. “It’s great that all the veteran groups get together and we have a lot in common. Our missions overlap in a lot of ways, so it’s great to see everyone getting together. UCLA has been a great partner in this, too.”

The staging ground for the past two years has been Jackie Robinson Stadium, the UCLA baseball team’s home field where veterans can attend games for free, and the site of an increasing number of veterans-oriented events. This spring, the space is being utilized for UCLA Fantasy Camp on Jackie Robinson Day for the third year in a row, a veterans movie night, and a special “Garden, Grill, and Game” day. 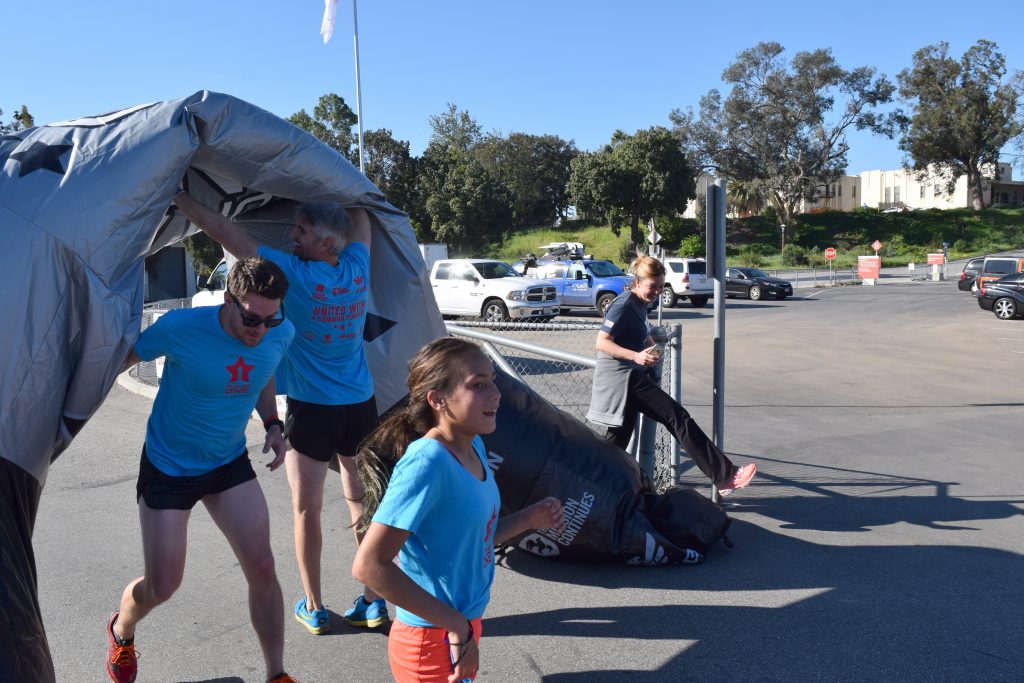 A blown inflater fan couldn’t damper the finish line while organizers worked to get it back up.

“UCLA has a longstanding partnership with the West LA VA through its medical enterprise and many other institutions on campus, including its School of Public Affairs, School of Nursing, Dentistry, among others,” said Elizabeth Boatright-Simon, head of advocacy for UCLA Government and Community Relations.

“Last year, UCLA and the VA agreed to enhance that partnership through the creation of a UCLA-run legal clinic for veterans, a jointly run Family Resource and Wellbeing Center, and UCLA/VA Mental Health and Addictions Center for Excellence. We’ve also been able to offer an ongoing creative writing course and a new phone-tography course” 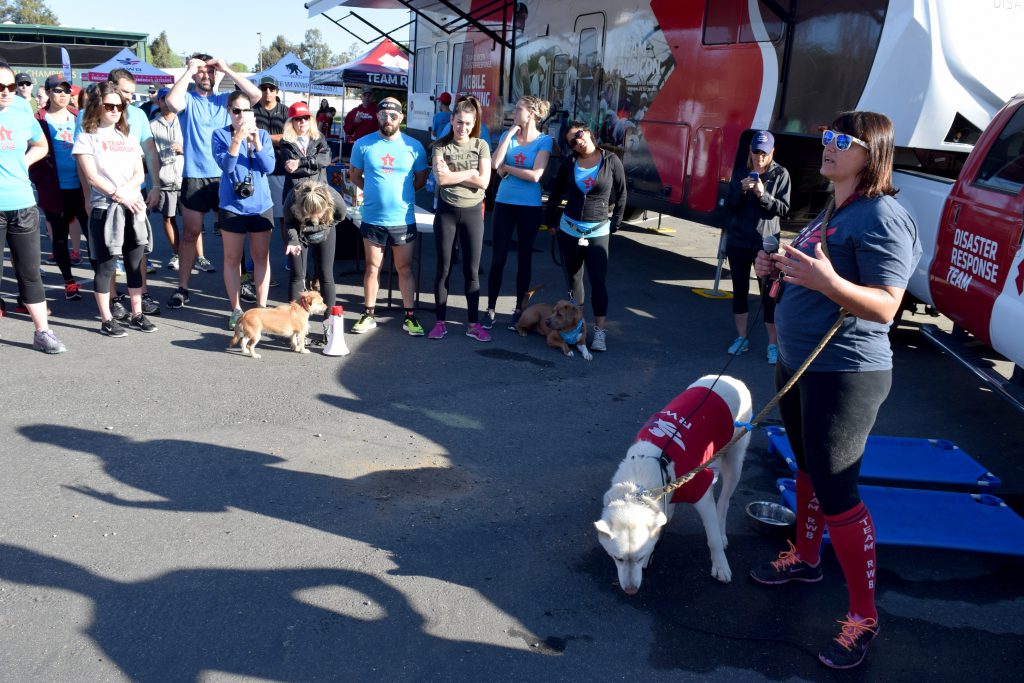 Janice Bowman addresses her fellow runners to talk about the cause of Run As One.

As for the Run as One, she said it is “a perfect opportunity to support veterans groups in an activity that welcomes veterans and non-veterans alike to build community next door to the UCLA campus. We want to support these great organizations in any way we can, and also remind their members of the great services UCLA is offering in the areas of medicine, mental health, business law, recreation and more.”

Coast Guard veteran and Team Red, White and Blue league sports coordinator Janice Bowman said she had a great time with her dog taking a spin through the course. The partnerships and the activity were a perfect fit, she added.

“Our mission is to enrich veterans’ lives through physical and social activity, and to help people transition back into the community. I believe the partnerships with all our different representatives and organizations can help create a better collaboration so that we are all working together in our mission to help serve those veterans in our community.

“To watch everyone come together on one of the largest campuses the VA has, and to work with UCLA with their support of this mission, it’s just great to see all the energy and spirit out here,” she added. “It’s empowering.” 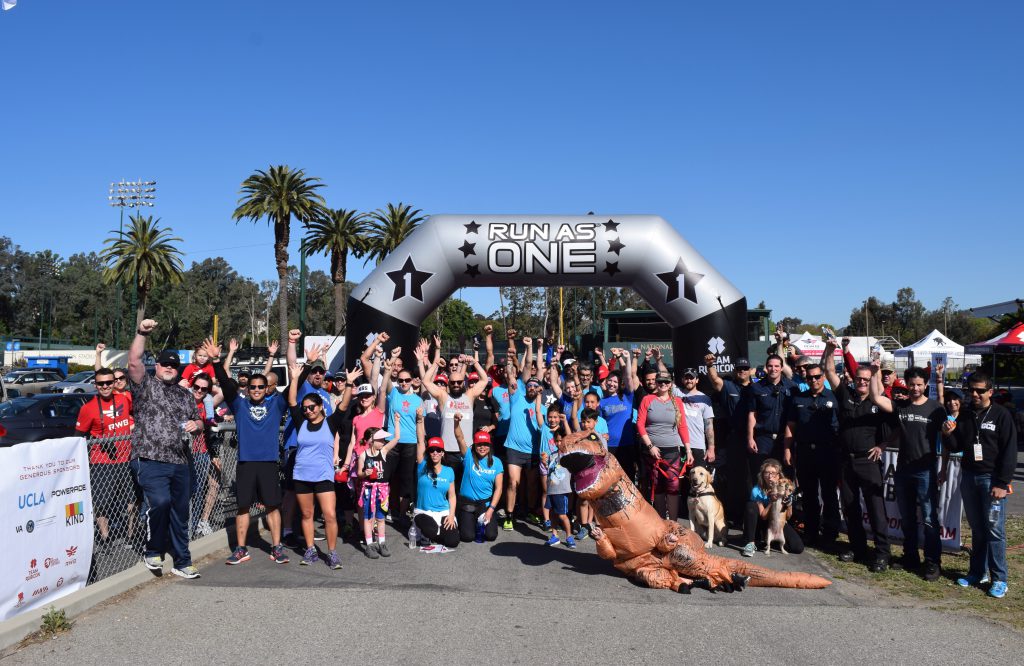 Another successful Run As One completed.