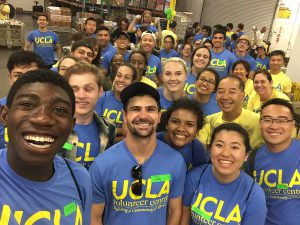 From distributing school supplies to elementary school students in the MacArthur Park neighborhood to sorting donations at a food bank to gardening at a senior center in Watts to painting at a home for veterans, the annual UCLA Volunteer Day sent thousands of Bruins throughout Los Angeles to make a difference.

This year marked the eighth edition of the nation’s largest community participation event for new college students, as more than 7,000 UCLA volunteers provided almost $1 million worth of service at 50 locations.

“It’s to give our students a sense of public service,” said UCLA Chancellor Gene Block. “So it really reinforces the view that you’re at a public institution and part of your obligation is to help. Hopefully, this will really inculcate in a lot of our students a lifelong commitment to being involved in volunteer work.”

The sleeping giant that is Volunteer Day began rousing before dawn; by 8 a.m. a slow-moving human “river” formed by thousands of students, all garbed in Volunteer Day T-shirts, flowed down from the Hill’s residence halls into Drake Stadium and out onto Charles Young Drive where buses were loading to take off.

Amid upbeat greetings of “Happy Volunteer Day!” from residence hall staff, the new students from near and far — from distant places like Hawaii, Dubai and Cleveland, Ohio — found themselves ready to explore L.A. the Bruin way: through community service.

Like many of the new students, Emma Schumaker, a freshman from Temecula, had already heard about UCLA’s reputation as “being a big volunteer place” before she arrived here. “I definitely thought about that before I decided to come here. I thought I would join some clubs and that would get me out volunteering.”

Schumaker and the other students didn’t know which of the 130 buses they’d be boarding; whether they’d be headed to South Los Angeles, Van Nuys, Atwater Village, Skid Row, Santa Monica or any the other dozens of sites; or whether they’d be painting schools, preparing meals for the homeless, cleaning parks or beaches, sorting donations at a food bank, playing bingo with seniors or clearing hiking trails.

“It’s exciting and, at the same time, a little scary because you don’t know what they’re going to ask us to do,” said Noelle Lee of Honolulu, Hawaii. “But it will be all worth it.”

The roughly 40,000 hours of community service provided on Volunteer Day — and in advance by volunteer organizers — are conservatively estimated to have a value of more than $920,000 in services provided.

At Hoover Street Elementary School in the city’s MacArthur Park neighborhood, a flock of blue-shirted UCLA volunteers formed an archway with their arms. As the Hoover students ran through, they giggled and snagged high fives on their way to an assembly that featured the chancellor, UCLA cheerleaders and mascots Joe and Josephine Bruin. Block — joined by the 100 UCLA volunteers and Assemblyman Miguel Santiago — spruced up the campus and distributed more than $49,000 worth of school supplies and dental kits to all 750 pre-K through fifth-graders. The school was selected in part due to the demographics of the students: 96 percent of the students qualify for free and reduced-price lunch, and 73 percent are English language learners. The supplies were donated by the nonprofit K to College. 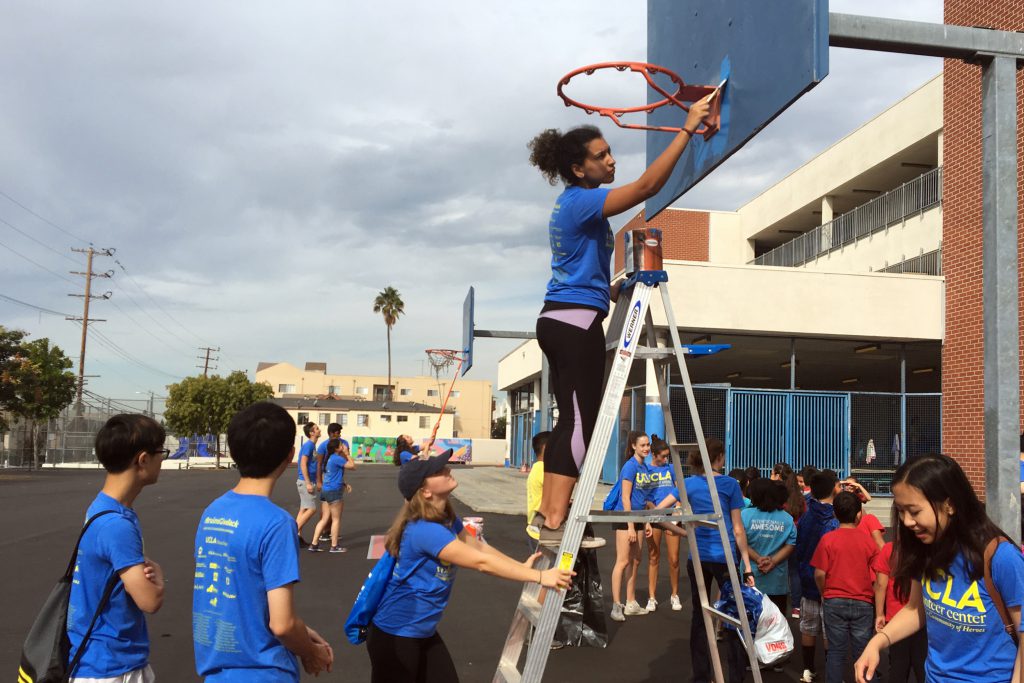 Devorah Norton, 18, paints the backboard at Hoover Street Elementary School. “I used to go through this neighborhood, so it’s already significant to my life, and now I get to be a part of it.” (Alison Hewitt/UCLA)

UCLA volunteers painted the playground with a map of the United States, added school logos to the basketball courts and painted the cafeteria.

Meanwhile at Gault Elementary School in Van Nuys, 43 volunteers brightened up basketball backboards on the playground with Bruin blue and gold.

At the Veterans Affairs Greater Los Angeles Healthcare System across town, 200 volunteers served lunch and worked in the facility’s Japanese garden. At the neighboring Veterans Home of California in West Los Angeles, 100 student volunteers poured out of two buses to sand and stain outdoor patio furniture, help organize residents’ rooms and common areas, talk with residents and accompany them on walks.

The Veterans Home of West Los Angeles is a place that Volunteer Day project co-leader Saba Ebrahimi knows well. The fourth-year biology major has volunteered at the home many times through her work as an outreach co-chair for UCLA’s Operation Mend Undergraduate Association.

“We want to remind [our veterans] that they haven’t been forgotten and that we’ll always remember their sacrifice and thank them,” Ebrahimi said. “We just want to let them know that their country recognizes what they’ve done and that respect will always be there.”

UCLA students also prepared meals for the homeless at the Midnight Mission on Skid Row and helped sort food at the Los Angeles Regional Food Bank southeast of downtown.

The band of UCLA volunteers in the food bank’s enormous warehouse inspected canned goods for expiration dates and organized them by food type, maneuvered pallets of packaged goods and even donned jackets while working with perishable items in the cold room.

“It’s a little manual labor before you kick off your mental labor,” said Colin Hayashi, a first-year from Arroyo Grande, who added that he plans to seek out service groups on campus. “I love how UCLA is dedicated to service. It makes you feel like you have come to a place that cares about its community.”

Angelenos who use public hiking trails, parks and beaches also benefited from the more than 1,000 UCLA volunteers who helped clean up Venice Beach and cleared hiking and biking trails along the Los Angeles River and in Griffith Park.

Meanwhile in Watts, 60 eager UCLA students helped out at the Watts Senior Center and Rose Garden. Second-year Bruin Monica Martinez, who grew up in South L.A. 10 minutes from Watts, led the volunteers in activities at the senior center. Inspired by her experience at the VA during last year’s Volunteer Day, she got involved in the One Bus, One Cause program through the UCLA Volunteer Center and enthusiastically recruited friends to help lead the service teams in Watts today.

To keep the momentum going when they returned to campus for a late lunch, the volunteers were invited to the UCLA ServeFest to learn about the more than 300 registered student organizations dedicated to serving others.

In addition to the impact Volunteer Day makes throughout Los Angeles, it’s also intended to have as much of an impact on the new Bruins.

Kunal Ranat, a first-year from the Central Coast who is living in De Neve, said he was glad to have the chance to work side by side with his new classmates. “It’s a great way for people to get to know each other because I’m not from around here. For me, volunteering is a chance to get the nerves out before classes start.”