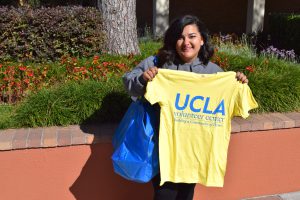 Participating in Volunteer Day 2015 led UCLA student Monica Martinez to embrace community service and take on more volunteer work during her freshman year. Her next volunteer activity: She will be a project manager at Volunteer Day 2016 on Monday.

A year ago, Monica Martinez, a UCLA freshman from South Los Angeles, watched organized chaos unfold around her at Drake Stadium as she lined up with thousands of other new students and shuffled toward dozens of buses destined for Volunteer Day sites across the greater Los Angeles region.

Martinez felt the anticipation build as she started on this new adventure, moving as one body toward a single mission: to help others. “You feel like you are a part of this bigger community,” she reminisced. That was the first time she really felt like a Bruin, she recalled with a big smile.

Her destination back then was the Veterans Home of California — West Los Angeles, where she worked in the garden and played Bingo with a group of veterans. “Even though it wasn’t the most glamorous thing we could be doing, I knew that it would be something that would be lasting for them,” she said.

On Monday, Martinez will be back for Volunteer Day 2016 — back in the undulating, moving masses of nearly 6,500 new students in their Volunteer Day T-shirts — but this time, the second-year student will be a project leader, a job for which she volunteered. She’ll be shepherding freshmen and transfer students to the Watts Senior Center, one of 50 community partner locations where UCLA students will paint, clean up, restore, plant, lead activities with children and dance with seniors, among many other tasks.

For many students, like Martinez, Volunteer Day becomes a cornerstone of their UCLA experience and ignites a passion to build on the university’s tradition of service and community engagement, burnishing its reputation as a national leader in volunteerism.

Volunteer Day 2015 was only the beginning for Martinez, now a double major in political science and geography/environmental studies. During her freshman year, she stayed active through the UCLA Volunteer Center’s One Bus, One Cause program, which transports 50 Bruins each month to a location in Los Angeles to do community service.

Six months after Volunteer Day, Martinez experienced a flashback. She was back on the West Los Angeles VA Campus to watch a baseball game at Jackie Robinson Stadium when one of the veterans she met during at the 2015 event recognized her, came up to her and recalled her enthusiasm at Bingo.

“Just at that moment, it really clicked in me, and I knew that even the small amount of time I spent with them meant so much. It just makes everything so much more rewarding in the end,” Martinez said.

The lasting impact of Volunteer Day not only touches students, but leaves an imprint on those who benefit from students’ labor.

Second Street Elementary School Principal Cristina Munoz had only been on the job for two years when she was approached by UCLA about her school becoming a service site for Volunteer Day 2015. 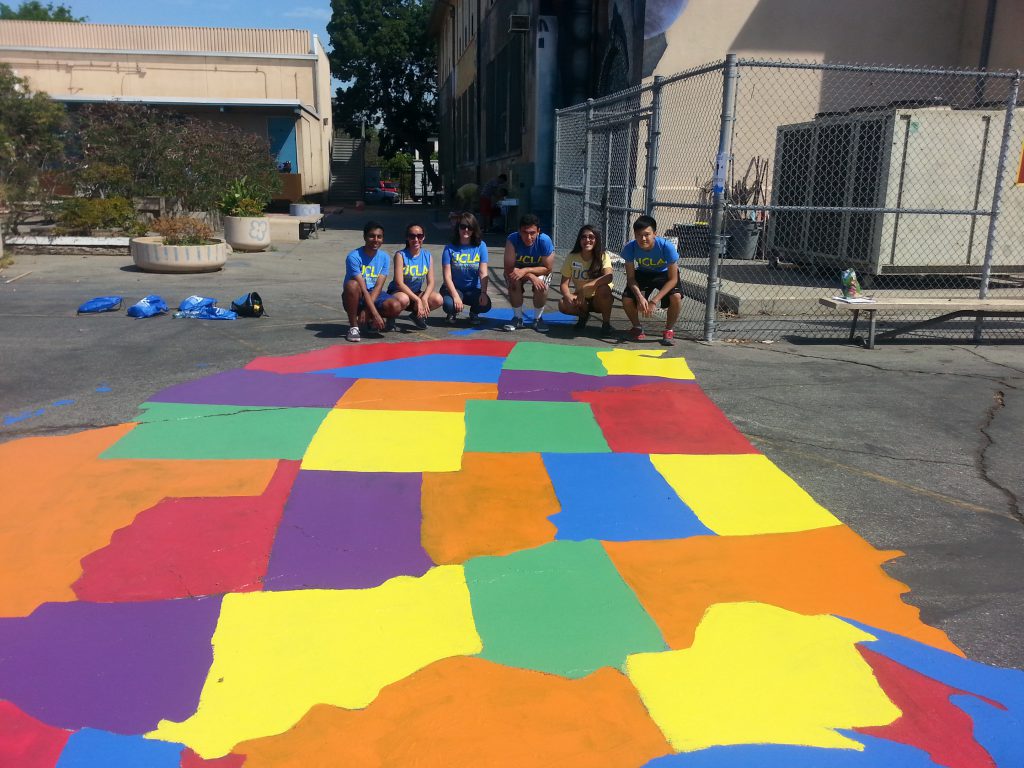 UCLA students painted a U.S. map on the grounds of the Second Street Elementary School in Los Angeles on Volunteer Day 2015.

“When I first heard about being chosen, I was excited, but I didn’t really know what to expect,” Munoz recalled.

Located east of downtown L.A., her school definitely needed some tender love and care, she said. Built in 1895, the school hadn’t been repainted in more than 25 years. So last year, she even invited parents to be part of the school’s first Volunteer Day.

Munoz recalled the excitement of seeing UCLA students spill out of school buses that pulled up to the building. “They still talk about that day,” Munoz said of her students, parents and teachers.

Dozens of UCLA students got to work painting hallways, planting a garden, creating full-scale murals on school walls and building makeshift rockets with students in classrooms.

“I didn’t realize the impact that this would have on my community and my kids,” Munoz said of last year’s event. “It gave my students a sense that, ‘One day, I’m going to UCLA, and I’m going to be a Bruin.’ Our conversations are now greater and larger in scope. Parents are asking more questions. It’s changed the culture and the whole dynamic of the school.”

Even after Volunteer Day was over, more help came to the school from UCLA to Second Street Elementary to finish some of the projects through the One Bus, One Cause program.

“They literally planted the seeds in planters, and now they are grown,” she said, noting that UCLA helped create a special reading garden at the school. “The plants brought so much life to the area.” 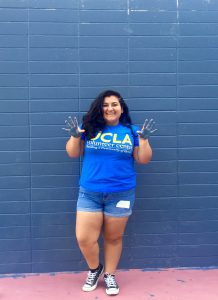 Monica Martinez, now a second-year student at UCLA, regularly looks for opportunities to do community service through the UCLA Volunteer Center.

This year, Volunteer Day 2016 is prominently  circled on the school calendar. This time, there are basketball courts to paint, graffiti to cover up and another ambitious planting project to get underway.

“This was our first [partnership] with a major university,” said Munoz. “It may seem like it’s just aesthetics that they’re bringing, but we’re getting ready for something bigger — our kids are going to college when they grow up. This isn’t a school that will be forgotten.”

Back at UCLA, Martinez is preparing to lead about a half-dozen captains and nearly 50 new students in activities such as planting flowers, pulling weeds, setting up a kitchen, serving meals — and, most importantly, interacting with the seniors at the Watts Senior Center.

She already knows what she will tell these UCLA newbies:  “Within the few hours you are here, you can make such a difference in these people’s lives.”

“Hopefully I can communicate that, and they will be receptive,” the second-year student said. “Volunteer Day is just one day, but you know, you can do this any day. Volunteer Day can be any day.”