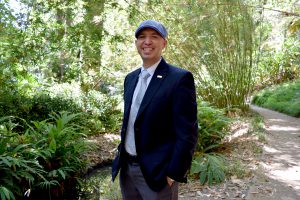 Tucked deep within the Mildred E. Mathias Botanical Garden, Xiutleth Santibanez is home, wrapped in his UCLA oasis, a place that made him comfortable to reach achievements he dreamed about for years, and instill a confidence in life he wishes to pass forward to the next generation.

“It hasn’t changed,” he said as he walked the winding pathways within the garden. “You can still see all the etchings on the trees students made. If anything describes me, it’s the chaos of this garden, but with so much beauty. People will say, ‘There’s just leaves and dead trees.’ But those trees are dormant, and there is something alive here.”

Santibanez always wanted to go to this university. And since graduating from UCLA, he has become an active voice for the university and higher education, traveling as far as Washington D.C. to have his voice heard.

“Nobody in my family had gone to college,” he said. “I transferred (to UCLA) from Pierce College in The Valley. I remember telling somebody I wanted to study history. And he goes, ‘So where do you want to study?’ and I said, ‘UCLA.’ And this is a guy I really admire, and he tells me, ‘You should really apply to Cal State Long Beach or LA.’ It was so devastating.”

This was not the first time Santibanez would feel undermined by the inherent realities surrounding his upbringing. But he was not so easily deterred. He got into UCLA. And from there, he found a sanctuary removed from the doubt and the doubters.

“When I got into UCLA, I was taking the tour and we literally walked by here (the garden) on the outside,” he said. “There was a sign asking for volunteers.”

Santibanez already worked every day from 4 p.m. until midnight at Blue Cross California to just barely make ends meet. Parking was an expense he wanted to avoid. He volunteered at the garden. 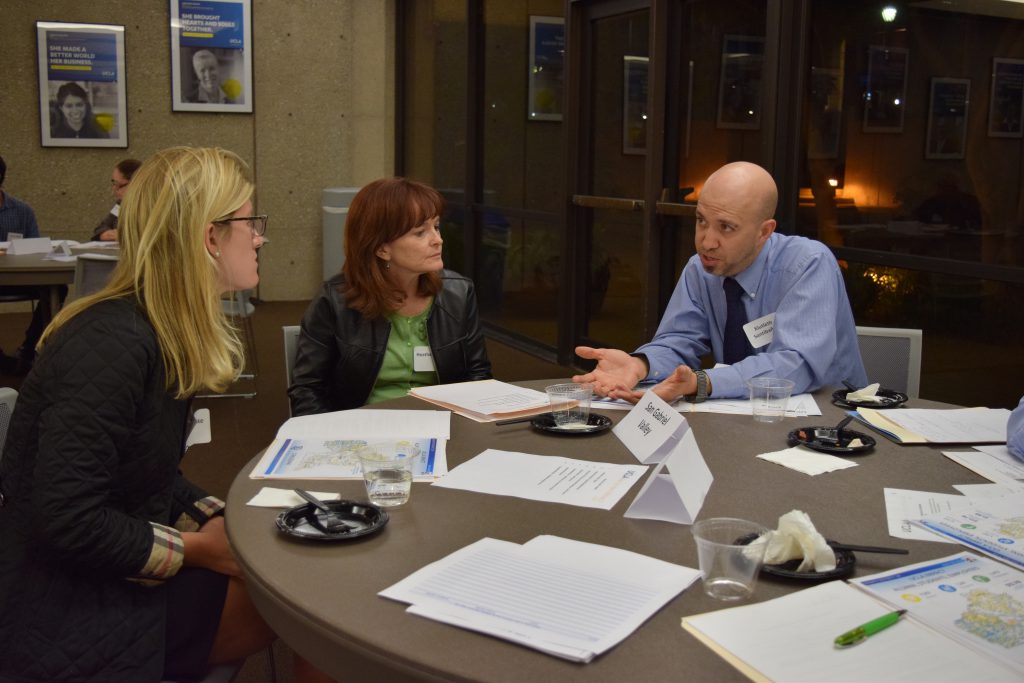 “This was the only place you could volunteer and receive free parking,” he said with a chuckle.

His first class was in the Mathematical Sciences Building nearby.

“There were 300 people. I thought I was going to fail. I felt so insignificant. But then I would come here and have lunch, or come here and take a nap. This is the place I would find peace. You drown out the outside sounds, but you can hear the birds and all these amazing things in nature.”

Currently serving as a high school teaching coordinator, Santibanez will sometimes bring his students to campus and he will tell them his story.

He was born in Mexico. His family went to Disneyland when he was 8 and “we just never left. We’re some of those, quote unquote, individuals who overstayed their visas.”

His mother cleaned houses. His father worked gardens and ended up working as an assistant to a janitor, and climbing his way up to supervisor. The owner of the company he janitored for offered to help with the family’s legal issues. 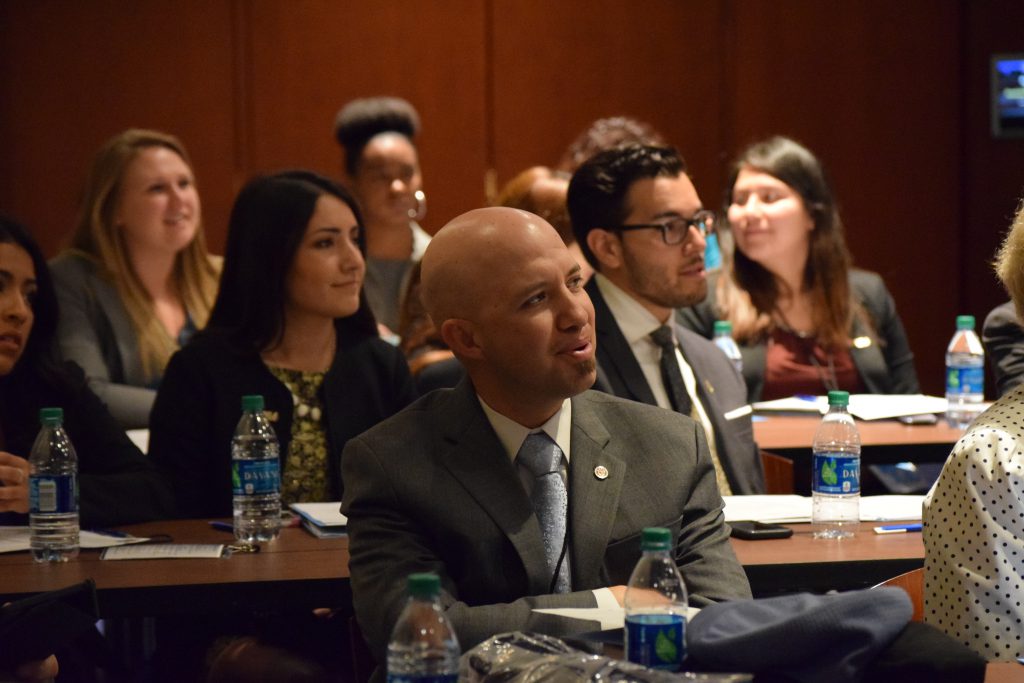 Xiutleth Santibanez listens intently during a seminar at this year’s advocacy summit in Washington, D.C.

“He helped with the paperwork, but it still took forever,” Santibanez said.

Well before the paperwork went through, he had experienced one of his greatest embarrassments. This was before dreamers, and when he first applied to Pierce College, the person in charge loudly noted his faked social security number — something necessary to receive in-state tuition.

“It was like my dreams were dashed right before me,” Santibanez said.

Even before that, he recalled a lasting impression of fifth grade. The ESL students were segregated with a different book. He stole the English one and took it home.

“I just drilled and drilled that thing. And then one day, it was my time.”

He went and sat with the English-speaking students.

“I remember sitting there and Mrs. Miller was so awesome. She could have told me to go back. But instead, she looked at me and allowed me to try and struggle.”

After one or two false starts, the words flowed.

These types of moments define a person. Santibanez went on to graduate with a degree in history and a minor in public policy. He received a masters degree from LMU in social work, but not too long thereafter, the pull to make a difference in the classroom called.

First, he worked with an alternative education work program to help high school dropouts. Later, he taught at John F. Kennedy High School and then served as assistant principal at Artesia High School for a year. Currently, he works at Orthopedic Medical Magnet School as the teaching coordinator.

“I get to see these kids and try to help them get a high school diploma,” he said. 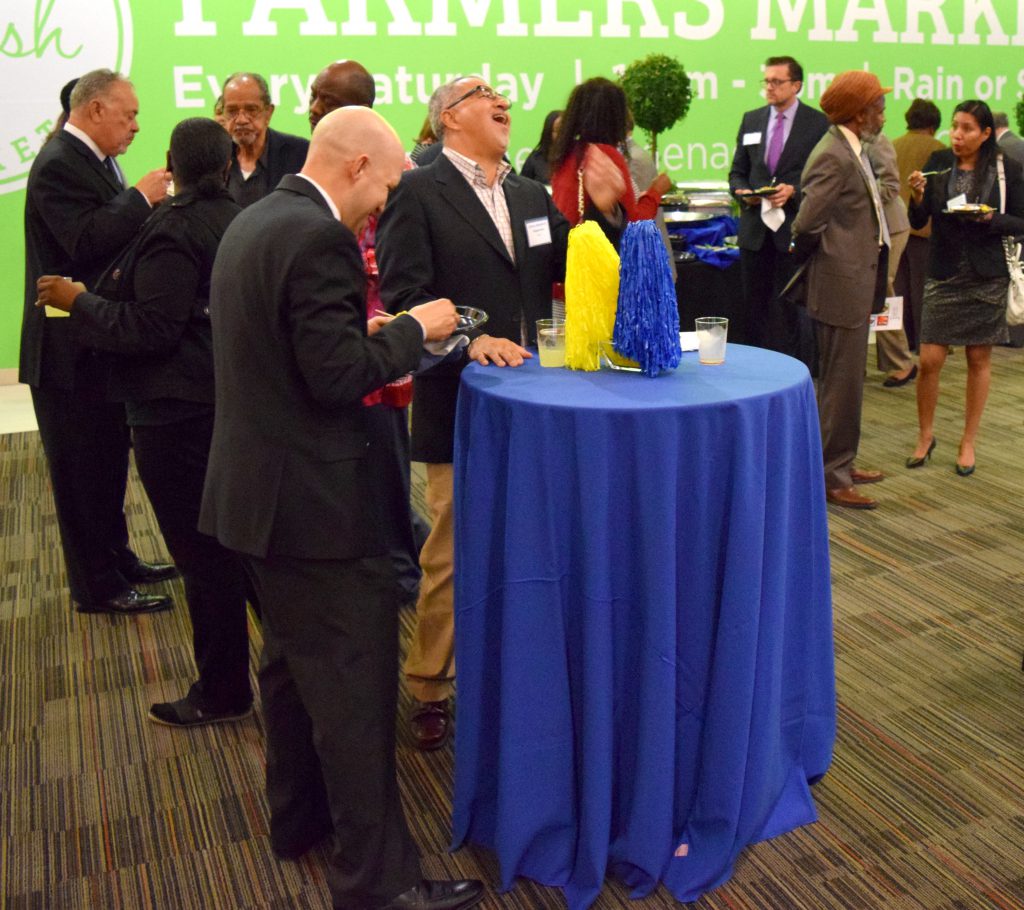 He was a difficult student himself, so he has patience and drive — “I mean, I made a teacher retire once. I don’t know if it’s remorse that took me into the teaching field to pay for that,” he said with a laugh.

And he tells the students these stories when he brings them to UCLA.

“I bring them here and show them what I did. I show it to them to show them I’m just a regular person like them — that I struggled. I should have that ADHD. I can’t stay still, or sit still and read a book. It’s difficult for me. I see these kids and think of myself. I remember what I went through — that there was not support. Or they made fun of you when you told them what you wanted to do.”

Santibanez tells these stories to the elected officials he meets as an education and UCLA advocate. UCLA Day in D.C. was his first advocacy trip.

“I pretty much booked the flight and I found a hostel,” he said. “And from then on, it’s all about speaking out about the importance of UCLA, the Master Plan of Education, which I’ve been a part of from K-12, community college and UC, and then went back for a masters at Cal State (in education).”

He works with the city council. For example, his students partnered with the office of Councilmember Curren Price for work on TB Awareness Day. He stumps even harder at the state and federal levels.

“You need to support our schools. You need to look at what’s happening. These kids need an opportunity and to strive to get somewhere in life,” he said. “So much was taken away during the budget cuts and schools are still scrambling to make that up.”

If it weren’t for great teachers, where would he be?

“It’s important to take a role in government, to be able to speak out and say I don’t agree with this,” he added. “Writing a letter, an email, calling. I know all my representatives. I have to speak out because somebody spoke out for me.” 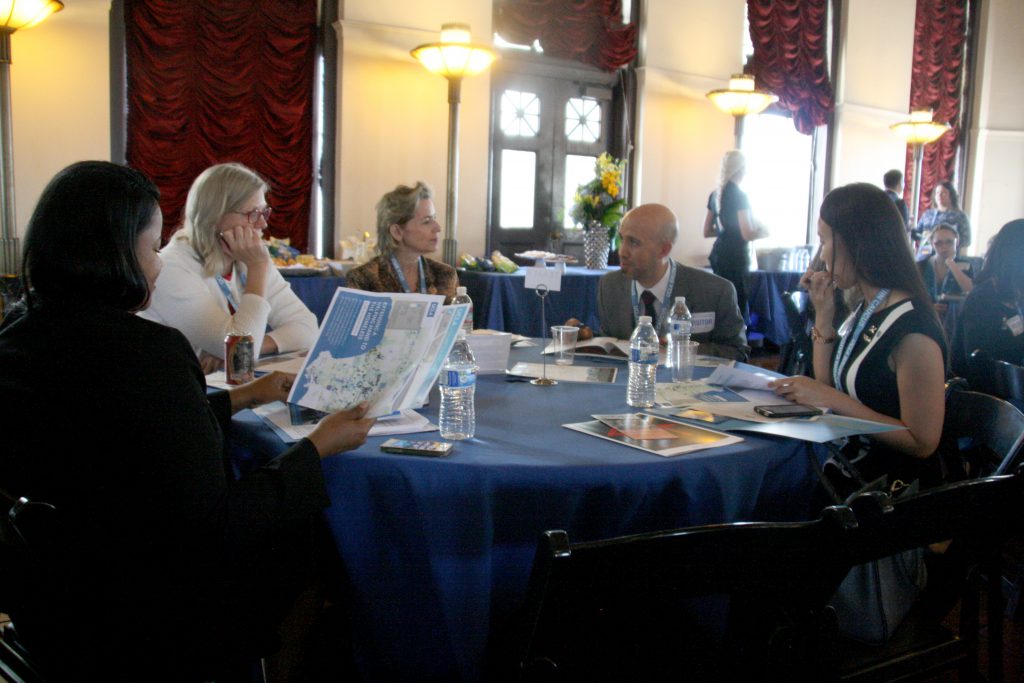 Xiutleth Santibanez talks with his team of advocates in preparation for a day of advocacy at city hall.

People can never underestimate how powerful the image of UCLA in the community can be, especially at an early age. Santibanez recalled a time when he was at a middle school in The Valley. He had a UCLA hat on and the kids, out of nowhere, started the 8-clap. They were taught that at some point and still remembered, he noted, and civic advocacy could be taught, as well.

“I tell everybody, man, I owe UCLA so much. Really. I thank God for the doors he opened at UCLA.”

And so those students he brings to campus. He will tell them about his time across the street from the garden and the 300-student class. And he will take them down the winding dirt paths, and he will hope that one day they will find solace here at UCLA, and solace in the surroundings of a garden that gave him peace and peace of mind all those years ago.