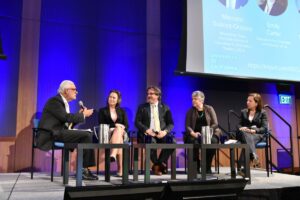 Four car-clogged freeways surround Darlene Tieu’s students at Horace Mann UCLA Community School in South Los Angeles. Days with clear skies in the area are few and far between. Just this past October, her students dealt with dangerous heatwaves and cancelled sports because of smoke from fires in Southern California.

“Right now, my students are doing their best at being teenagers,” Tieu told attendees of a conference held at UCLA that was focused on how to teach environmental science literacy. More than 200 higher education leaders, pre-K through 12th grade educators, researchers and policymakers gathered at the UCLA Luskin Conference Center for the Environmental and Climate Change Literacy Project and Summit as part of an effort to hash out the big ideas for educating the next generation of climate change-aware students.

With the proof of climate change affecting their daily lives, Tieu explained how she has taught her students about environmental science using a curriculum that incorporates the realities of climate change. Most recently, for example, she had her chemistry students complete a lesson on what each person’s ecological footprint was.

“Since that lesson, we continue to learn about climate change and it has made my students realize that the reality of their future is going to be very different from what they imagined,” Tieu said. “More importantly, they are realizing they are the ones who are going to have to fix this.”

And with that being the reality, Tieu knows she needs to make sure her students are, in turn, properly educated on the subject.

Tieu has been collaborating with Heather Clark, a doctoral student, and other educators at the UCLA Graduate School of Education and Information Studies. Teaching teachers how to teach climate science was the fulcrum of the Environmental and Climate Change Literacy Project and Summit — a coalition of faculty and administrative leaders from across the University of California and California State University systems in partnership with UCLA GSEIS.

“No matter where you come from, everyone has an important role in preserving the environment, whether through education, research or policymaking,” Block said. “Someday soon, of course, the next generation will have to pick up where we leave off, which is why the conversations we have today are so critical.”

The people attending the summit aimed to identify innovative, practical and scalable solutions for educators through initiatives such as integrating environmental and climate change literacy across all education subjects, establishing a climate change literacy taskforce at the state level, working on teacher credentialing and more. They also plan to help more than 500,000 high school students each year become literate in environmental and climate change issues and solutions. And officials are positive they can make an impact; the two university systems combine to train 56% of California teachers.

“It is very important to talk about educating young kids, K-12, about the environment and climate change. But if we don’t also talk about solutions, if I was still a kid, I think I’d start to panic,” said Emily Carter, UCLA executive vice chancellor and provost, who is also a distinguished professor of chemical and biomolecular engineering in the UCLA Samueli School of Engineering and a leading voice on climate change. “Every kid should be able to explain, scientifically, the greenhouse effect and how it is destroying the planet.”

In between the speakers, attendees worked during breakout sessions, sharing information and best practices to take back out into their day-to-day work, research and studies. Exposure to so many experts and informed advocates, like the teachers, was invaluable for the policymakers in attendance.

“The university is a repository of wisdom, knowledge, science and research,” former Gov. Brown said, noting that policymakers will look to academia for help. “This is the place that should make a major contribution to dealing with this profound threat that we call climate change. We need people to know, understand and wake up.”

Many speakers cited student-led climate strikes and internationally lauded activist (and 16-year-old) Greta Thunberg as reasons for optimism. The summit opened with the UCLA Lab School student group, Voices in Action, singing pro-environmental songs, one with the repeating line “This pretty planet spinning through space” — a salvo of hope.

“The time to act, and act with urgency is upon us,” said Marcelo Suárez-Orozco, Wasserman Dean of the UCLA Graduate School of Education and Information Studies and summit steering committee co-chair. “Fortunately, we have a secret weapon to use in the fight against climate change: The youth of the world.

“Youth are the key to winning the battle against climate change,” Suárez-Orozco continued. “And after years of inaction, the least we can do is make sure that they have the opportunity to gain access to the knowledge they need to understand the challenge the climate crisis presents, and the ability to lead the solutions that will be necessary to save the planet. We must help them to succeed.”