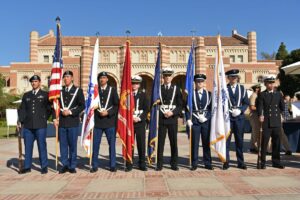 UCLA leaders recognized the contributions and sacrifices of veterans. (photo by Todd Cheney/UCLA)

As Christopher Jones looked out into a crowd of veterans, military peers, family members and the public gathered at UCLA, he reflected on his life’s ethos, one definitively shaped by his service in the U.S. Navy.

“It means embracing everything about our country — all of the privileges and all of the shortcomings, every success and every failure,” continued Jones, who is a Pat Tillman scholar, “and being willing to learn from those failures, and to never stop striving to make the world a better place.”

After spending four years doing that in the Navy, Jones has shifted arenas and is now trying to improve the world by pursuing his doctoral degree in chemistry at UCLA.

Jones spoke at this morning’s Veterans Day ceremony on Wilson Plaza. The annual ceremony, which took place during UCLA’s Centennial year, was attended by dozens of people paying their respects to veterans for their service. In addition to recognizing veterans, the morning was also an opportunity to honor the unique partnership that has been formed between UCLA and the veteran community over nearly a century — and the drive of both to better each other and the world in the name of public service.

“Stories in the news, particularly those from dangerous and remote places, constantly remind us of how much we rely on our military to keep us safe,” UCLA Chancellor Gene Block said. “It’s very easy to take this for granted in our everyday lives, but this highly trained group of exceptional men and women with highly developed skills and the ability to carry out sophisticated missions certainly deserves our recognition.

“Your selfless dedication cannot be overstated,” Block continued. “For all of this, we commend you, and celebrate you, and are grateful to you and your families.”

For more than 75 years, UCLA has worked with the Veterans Affairs Greater Los Angeles Healthcare System to serve veterans through patient care and research, and to train the next generation of medical and mental health care professionals.

The renewed partnership between UCLA and the VA has resulted in the following:

• The revival of the 15-acre Veterans Native Garden next to Jackie Robinson Stadium, where special monthly events have attracted more than 400 volunteers and served over 600 meals.

• A cross-pollination of experts — more than 300 V.A. faculty members have joint appointments at UCLA and about one-third of UCLA medical students hold residency at the West L.A. V.A campus.

• The UCLA School of Law Veterans Legal Clinic has provided legal assistance to more than 450 veterans since its inception in 2017.

• The UCLA/VA Veteran Family Wellness Center has provided services to more than 10,000 veterans and their families, which also opened in 2017.

• The Center of Excellence for Resilience and Recovery has begun to address linked problems of homelessness, mental health issues and substance abuse.

For these and many other reasons, U.S. News & World Report named UCLA best public college for veterans this year, a distinction Block said the school does not take lightly.

Resilience and the willingness to learn and grow were key themes of the program. Major Chris Silva, U.S. Army (retired) and manager of the UCLA Behavioral Intervention Team, spoke about his experiences exercising restraint from his time in Afghanistan and how that applied to his current job. Thomas Ruck, director of the Los Angeles National Cemetery, was on hand to take the time to find the Vietnam veterans for a special medal and commemoration.

Jones concluded his speech with an anecdote about when he was a high school student at the bottom of his class, who never took chemistry, and who — after having to apply three times — now studies that subject at UCLA.

“As service members, we are trained to learn, adapt and persevere,” he said. “We might stumble, we might fall, but we always get back up and do what we need to do to accomplish the mission.”