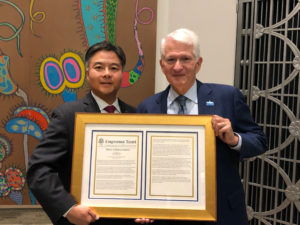 Although separated by more than 2,500 miles, the relationship between UCLA and Capitol Hill in Washington, D.C. is inextricably linked and constant — from the more than 35 percent of Bruins who receive federal Pell grants to the hundreds of research breakthroughs that count on federal dollars.

On Sept. 9, approximately 200 UCLA officials, students, alumni, faculty and staff gathered with their Washington, D.C. peers at the U.S. Botanic Garden to celebrate 100 years and reflect on the many ways the university and the people of the federal government — from agency members to high-ranking legislators — keep pushing the True Bruin goal forward.

“We have a lot of connections here — we have 4,500 alumni in the D.C. region,” Chancellor Gene Block noted as he addressed the gathering. “And it’s great now to finally share this moment with you. It’s an opportunity for us to recognize all that’s been accomplished in 100 years.”

He also acknowledged the many grants moving UCLA faculty research forward. “$1 billion in research support, much of it federally awarded, and we recognize that funding comes from right here…A lot of that is possible because we have alumni who develop the connections we need to better understand the programs we compete for.”

U.S. Rep Ted Lieu, who represents the campus, commended UCLA and its accomplishments — especially in regards to the Veterans Administration. “It’s such an amazing institution in the middle of my district,” he added. “UCLA’s academic credentials are rivaled by few.” He presented Block with a Congressional Record Statement to commemorate the Centennial.

The following days, Block and Depression Grand Challenge Director Nelson Freimer and Professor Michell Craske met with more than half-dozen legislators and agency officials, informing them of the multitude of research underneath the Grand Challenge banner, and offering the university as a resource on the issue. The week culminated in Zócalo/UCLA event titled “Is Depression a 21st-Century Epidemic?”.