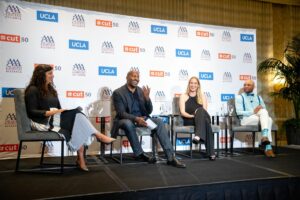 Members of the #cut50 panel on criminal justice reform stressed the power of personal stories to spark change and create allies. (photo by Artists & Athletes Alliance)

Putting people before politics is necessary to get things done, emphasized members of a panel of criminal justice reform activists who helped shepherd the bipartisan FIRST STEP Act through Congress, with the president’s support, and into law.

The act, which passed with overwhelming majorities in both chambers of Congress in December, is a small but important initial move toward lowering the number of people incarcerated in the United States — where more people are incarcerated than anywhere in the world. The FIRST STEP Act shortens mandatory minimum sentences for nonviolent drug offenses. Additionally, according to the Brennan Center for Justice, it eases a federal “three strikes” rule and the act expands the “drug safety-valve,” which would give judges more discretion to deviate from mandatory minimums when sentencing for nonviolent drug offenses.

“Both Democrats and Republicans bought into the lie that you can punish people and hurt people and that will somehow make our community safer, and it didn’t work,” said panelist Van Jones, CNN commentator and co-founder of criminal justice reform advocacy group #cut50. “And to see it now — people beginning to come around, it’s extraordinary. And it proves, if you fight, you win.”

UCLA partnered with the Artists & Athletes Alliance and #cut50 to present the panel discussion on July 23 to help the members of the star-studded audience — who filled a ballroom at the Beverly Hills Four Seasons — become better advocates for social justice.

“Our mission is to educate on public policy and the important issues facing our nation,” said Steven Ross, executive director of the alliance. “We want them to be smart on the issues, so they can use their voices to help their causes and become advocates on the issues they are passionate about.”

Jones implored those in the audience — which included actors Danny Trejo and Alyssa Milano, former athletes such as NFL player Marcellus Wiley and local officials like Los Angeles County public defender Ricardo Garcia — to use their higher profiles because they can cut through the “white noise” in Washington, D.C., for good causes.

Virani noted that approximately 2.3 million Americans are incarcerated and 4.5 million are under correctional control, like being on probation or on parole. By comparison, China has only about 1 million people who are incarcerated. Furthermore, African Americans make up 40 percent of the prison population in the United States, but only 13 percent of the country’s population, she said.

“As a society, we have become dependent on incarceration as punishment,” Virani said, while adding that the people in the room were “fighting to remind us all that transformation is possible.”

The First Step Act is the culmination of the work #cut50 has done since its founding five years ago, Jackson said, recalling the group’s first criminal justice reform summit, which included major figures from both political parties.

“People thought we were crazy,” she said. Even though many in that room didn’t agree on almost any other issue — there they were, speaking passionately about the need to reform the criminal justice system. “I remember, if you closed your eyes, you really couldn’t tell who was a Democrat or who was a Republican speaking.”

Prior to the panel discussion, #cut50 leaders met with UCLA students from a range of academic backgrounds from law to social welfare to public policy. Amado Castillo, a third-year student studying sociology and Chicano studies, said it was heartening to meet with people who were working day-to-day on criminal justice reform, and to hear that they were willing to work with anybody — even those with whom they sometimes vehemently disagreed — who would bring tangible, and immediate, relief to those unjustly affected by the criminal justice system. He was pleased they were willing “to go into those spaces in order to make other people’s lives better.”

Once the panel got going the three speakers implored the audience to use their personal stories to start a conversation.

Reed spent 14 years in federal prison. He admitted that the trauma from the experience had him wearing boxers in the shower for four years after leaving prison.

Jackson began to advocate because her husband was put in jail for drug charges. “This is an issue where there is so much stigma, so much embarrassment, that we can’t even talk about it. And if you can’t talk about it, then you can’t address it.”

“When we were in those offices in Congress, you would be surprised how conversation unlocks understanding,” said Reed, adding that #cut50 instructed him to focus on telling the stories of people while doing his work as an advocate rather than worrying too much about the politics.

Jones celebrated the real life accomplishments of that understanding on Friday, July 19, when 2,200 people were freed from federal prison because of the FIRST STEP Act, which also includes reforms in confinement and rehabilitation programming.

While many groups contend FIRST STEP didn’t go far enough in correcting decades of historic inequality, Jones and his allies were undeterred in their desire to work on legislation that would actually become law. If you didn’t want to pass this as soon as possible, even if under President Donald Trump, “Did we care in the first place? What was this about?” Jones remarked.

To the panelists, it was about bringing people home. “We’re in the homecoming business,” Jones added, and they’re just getting started.