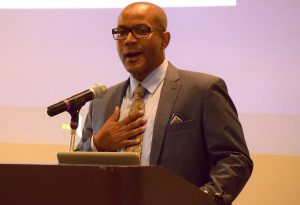 This is not to say that Richard Benbow III did not enjoy the cable television business — as an avid sports fan, he more than relished his roles with DirecTV and Time Warner Cable. However, it’s been hard for him not to notice the change in tenor of the conversations he has out in the public when he mentions his advocacy for UCLA.

“Higher education was something instilled in me early on and it’s something I can get behind,” he said. “When you say UCLA, people light up.”

Starting this new job was a chance to “redefine my mission,” Benbow added, and he has hit the ground running in his position as day-to-day manager of the office, second in command to Assistant Vice Chancellor Keith Parker.

“There are a lot of leadership things that I’m learning,” said Benbow, noting that he finished up his MBA at the University of Michigan in April. “So part of my initial time here is to come in, without any ego or knowledge, and to observe and learn what’s going on and then try to figure out where I can fit in to help.”

Benbow was born in St. Louis, and is quick to note his sports fandom and his undying allegiance to the Cardinals baseball team. His family moved to the Los Angeles area when he was about 5 or 6.

His father was a civic worker for 35 years, including work in the community redevelopment agency for the city of Los Angeles. His mother was a lifetime educator at an elementary school in the Los Angeles Unified School District.

Playing basketball was important to Benbow as he grew up in Los Angeles, but eventually the reality that he wasn’t getting any taller changed his trajectory some. He ended up going to Howard University in Washington D.C. because they offered an opportunity to play some ball, although he did apply to UC Los Angeles and Berkeley.

“For me, I wanted to get the most out of my college experience that I possibly could,” Benbow said. “And even at that time I had interest in being a lobbyist, or government relations or some form or fashion of being in politics.”

Benbow graduated with a degree in international business and an emphasis in finance. The big ideas of business have always fascinated him, but it was an internship in the office of U.S. Rep. Julian Dixon that has influenced his career more than any other.

“It was fascinating, and being that young, I had no idea what I had at my disposal,” Benbow said. “The number of influential people and networking opportunities — working on The Hill in D.C., there’s not a better position I could imagine.”

But Benbow thought that was merely a pit stop. He went on to an internship with Hughes Aircraft, with a track to a fulltime job. Six months after he graduated, the company went through a large amount of layoffs. The plan had gone sideways.

Something did get the attention of employers — the Dixon internship — and Rep. Henry Waxman’s office came calling. Benbow was back in politics again.

“I think I’ve always been somewhat driven by the business side,” Benbow said. “But no matter what job I had, because of my background with Waxman and Dixon, somehow folks always identified me as the person to deal with government entities.”

After the Waxman job, Benbow landed what he saw as a dream job: working for DirecTV and specifically with its sports programming. He furthered his education by earning a Masters in Communication Management from USC.

Cable television would become his life for many years, working for DirecTV, then the city’s cable regulatory division, and finally landing at Time Warner Cable (he asks that you not blame him for the Dodgers television deal).

Benbow was in his mid-40s with a wife and two teenage daughters, and he was looking for a change, and he hopes that his business and corporate background can be of use to UCLA.

“I want to help change the perception and dynamic of what Government and Community Relations is. It is a value add to the university,” he said. “I want to tell our story the most effectively.”

To do that, Benbow acknowledges the new landscape his department is dealing with in the digital and short-attention-span era.

“We’re competing for a very small amount of free time that we are asking people to give,” he said.

To that end, Benbow believes some of his business experience could lend a hand — in particular, the use of predictive analytics, which among many things, could be used to find the people who are predisposed for political engagement. He is also looking for those things that naturally get people passionate about the school. For example: Football.

The ability to make advocacy personal is paramount, Benbow added, especially for cultivating the next generation.

“You need to be where they are, and see what they care about and then tie UCLA issues into what they care about,” he said. “We have to be there for all our advocates, and tap into their issues. We are a resource and if this is something they believe in they should join us.”

Benbow strives to lead with empathy and to better his fellow UCLA staff members and advocates.

“I really don’t care what you know until I know what you care about,” he added. “This is an opportunity for me to really advocate for something I believe in. As society moves forward, those who understand what higher education can do for them later in life, will undoubtedly do better than those who don’t. I think it will become even more prevalent the further we move forward in time.”