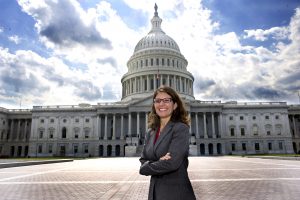 Following a nationwide search, Jennifer Poulakidas has been named associate vice chancellor for government and community relations. Poulakidas, a UCLA alumna, will begin this role April 1.

Poulakidas, who earned a bachelor’s degree in sociology with a specialization in business and administration from UCLA in 1989, and a master’s degree in public affairs from the University of Texas at Austin in 1991, has spent her career advancing U.S. public higher education through advocacy in support of student access, affordability and success; science, research, and innovation; and internationalization and global competitiveness.

In her current role as vice president for congressional and government affairs at the Association of Public and Land-grant Universities, Poulakidas works closely with institutions across the United States to help give voice to issues that public research universities face.

Prior to joining APLU in 2006, Poulakidas was in the University of California Office of Federal Governmental Relations, championing UC positions in Washington, D.C., for more than 11 years. Her early political and governmental experience was gained working as a legislative assistant to U.S. Rep. Nancy Pelosi, a consultant at Shipley & Associates and an aide to the commercial counselor of the U.S. Department of Commerce in Athens, Greece.

In 2018, Poulakidas was elected a fellow of the American Association for the Advancement of Science for her significant societal contributions to the advancement of science and engineering.

Poulakidas is also actively engaged with many organizations as a volunteer and advocate. Among them are the California State Society Board, United for Medical Research and the University of Texas at Austin Lyndon B. Johnson School of Public Affairs alumni board. Additionally, she served on the UCLA Alumni Association board of directors from 2009–2013.