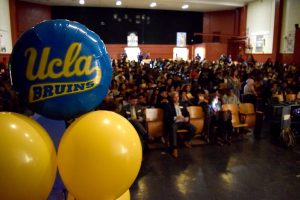 On Saturday, Oct. 21 high school senior Edwin Jackson rolled out of bed to go to school. He and some of his classmates at Robert F. Kennedy UCLA Community School, along with a smattering of family members, listened intently to UCLA officials as they discussed the admissions process and financial aid help.

Jackson was eager to learn as much as he could about the college experience, and specifically about how to become a computer science engineer at a University of California school.

“I came here this morning to gain tips on how to apply to a UC school,” Jackson said. “UCLA is probably a dream school of mine because it’s close to home and I could get the higher education that my parents didn’t, and that’s something I really want to do.”

Youlonda Copeland-Morgan, vice provost of enrollment management, and members of UCLA’s admission and financial aid staffs fanned out across the greater Los Angeles area in October to offer that kind of help to students like Jackson. In partnership with several elected officials as a prelude to the UC application period, which runs through the end of November, their mission was to offer mentorship, advice and examples of how students in underrepresented areas can achieve their dreams through the UC.

“We don’t want to miss an opportunity to make sure that students and their parents know all of the intricate procedures that are required to successfully apply to the University of California system,” Copeland-Morgan said. “We want to inspire them. There are people who care about them. We have Bruins in the area. For many of these students, this will be their first time actually engaging with someone from a college campus and particularly from UCLA.” 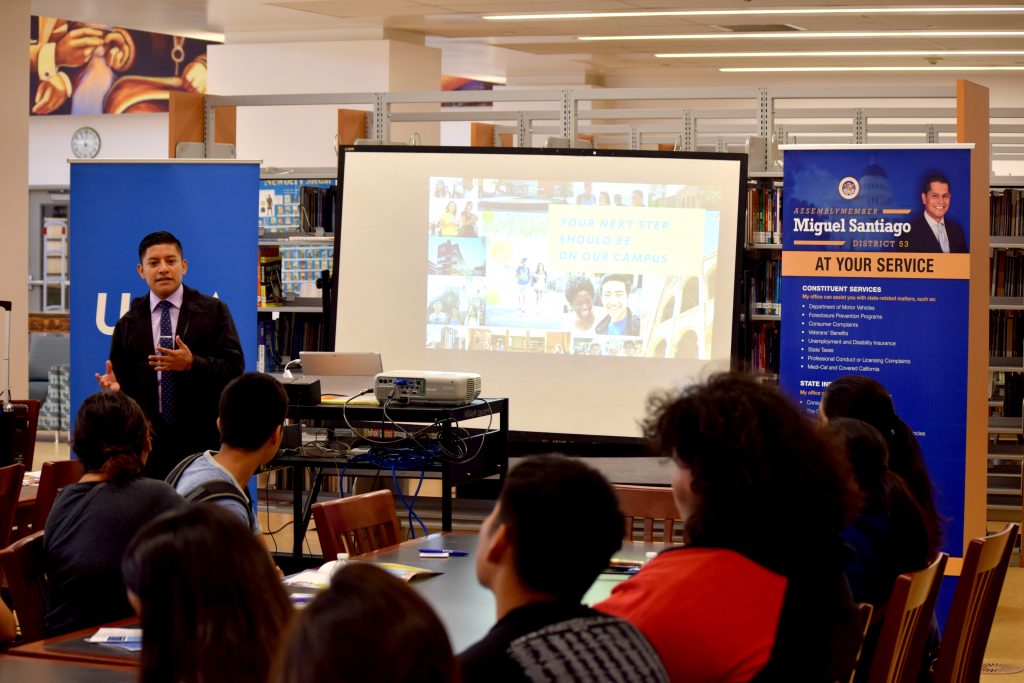 “Most of our students, the vast majority, will be the first in their family to go to college, and for some the first to graduate high school,” said Leyda Garcia, principal of the school, where the college-going rate has nearly tripled since partnering with UCLA. “We are very fortunate to have the support of UCLA. I think this is a part of a bigger context of opportunities for parents and students to access information.”

After the presentations, Williams Lopez, a fourth-year student who transferred to UCLA from junionr college, stood before the room and began to tell his story and then took questions.

“It’s good to see a young student close to their age who can really relate to them and tell them, ‘Well, here is how I did it,’” Garcia said.

“I understand the value of college education,” he said. “I was a first-generation college student. People in my family hadn’t gone to college before me. When I left high school, my grade point average was 0.83. That’s right, I didn’t miss a digit there.” 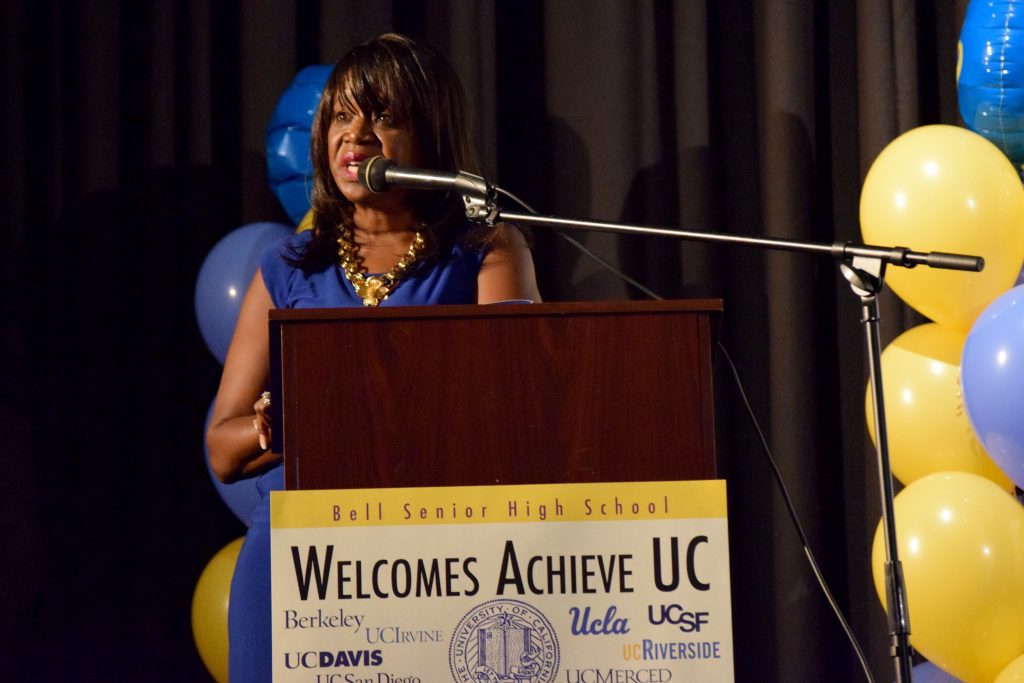 UCLA’s Youlonda Copeland-Morgan speaks to students about the application process for the University of California.

Rendon extolled the virtues of higher education pulling him up from working in factories on the graveyard shift, and praised the community college transfer system as a worthy pathway, too. He implored the students to take away what they could from the college fair taking place, and emphasized it was never too late to get on the track to higher education.

“When UCLA and the other UCs come here, and talk about going to college and how to make it affordable today, that’s a lesson worth listening to,” he said. “So I’m glad they are here today.”

“It’s a very powerful day when UCLA and all the UCs come to this community of Bell,” added Rafael Balderas, school principal.

Lance Go, a senior at Fairfax High School, quietly shuffled into the high school auditorium on Oct. 14. A flyer had tipped him off to an admissions and financial aid event hosted by California State Sen. Ben Allen and Los Angeles Unified School Board Member Nick Melvoin.

“I don’t really know all about Pell grants and that kind of stuff, and I wanted to learn more about it,” Go said, noting that he has started his applications. “But I feel like my application is not the best it can be, so I’m hoping to hear some tips to make it better.”

“We have to change the narrative [of who can go to UC] and events like this really help,” Melvoin said as he greeted the students and parents.

“The fact that you are here shows you really care a lot about their future,” Allen echoed. “I’m proud of your work and determination. You’ve overcome a lot of challenges to make it this far as UC-eligible seniors. Not everyone has made it this far.” 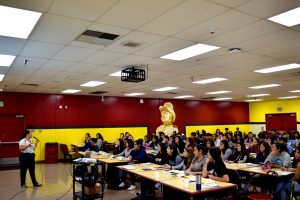 Jasmin Pivaral, assistant director of freshman recruitment at UCLA undergraduate admissions, spoke at Roosevelt High School about how to navigate the admissions process.

The true goal isn’t getting them eligible for UC though, it’s increasing the likelihood of these students attending. Going out into the community and partnering with parents, community groups and elected officials is important, Copeland-Morgan said. In many areas, the student-to-counselor ratio is 1,000 to 1, or even worse.

“All of our numbers at UCLA are rising,” Copeland-Morgan added. For 2017, UCLA received a record number of 102,000 applications and offered admission to 16,500 students. Of the California students admitted, 31 percent would be considered first generation, and 32 percent come from households earning less than $50,000.

And the partnerships with the community and elected officials hammer that home, along with policy — like Assembly Bill 19, created to provide a free year of community college, said Assemblyman Miguel Santiago, who helped organize the UCLA Community School event and also an earlier event at Roosevelt High School.

“I’m proud to have partnered with my alma mater, UCLA, to host these college application workshops,” Santiago said. “Events like these show bright, motivated high school students that the dream of higher education is not only accessible, but achievable, through a multitude of pathways.”