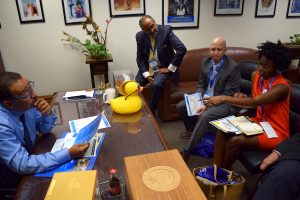 From the top of Los Angeles City Hall with a nearly 360-view, Jermeen Sherman could look out toward every part of the county.

She, and approximately 50 other UCLA students, faculty, staff and alumni, were preparing to meet with elected officials, or their staff, from all 15 city council and all five Los Angeles County Board of Supervisor districts to discuss workforce development, entrepreneurship and career readiness.

The meetings were part of UCLA Day with Local Government in downtown Los Angeles, which is meant to show government officials the university resources available to the community and partnership opportunities between UCLA and every corner of the county where it’s located.

“I didn’t know what to expect, and I was a little nervous about it,” Sherman said at the end of the day, having had meetings in two city council offices. “But honestly, the work we do is quite fantastic and speaks for itself.”

Sherman is the assistant director of UCLA Extension’s Custom Program and Corporate Education, which works with businesses, government agencies and advocacy groups. She and her colleagues work to streamline and customize UCLA Extension’s offerings to help workplaces and organizations across the region.

“We want to prepare the workforce of the future and [government officials] want to see their districts do well, so in order to do that education is certainly a good first step,” Sherman said.

Sherman’s first step was to be part of a team that met with City Council President Herb Wesson, who also represents the city’s 10th district. As the group of five UCLA advocates told their personal stories, or connected their programs to the specific district, the mood was light and jovial.

“How could you even learn or know that you have all these programs?” Wesson joked.

“That’s precisely why we are here,” said Al Aubin, a UCLA retiree and volunteer who has been involved with the university for 53 years. 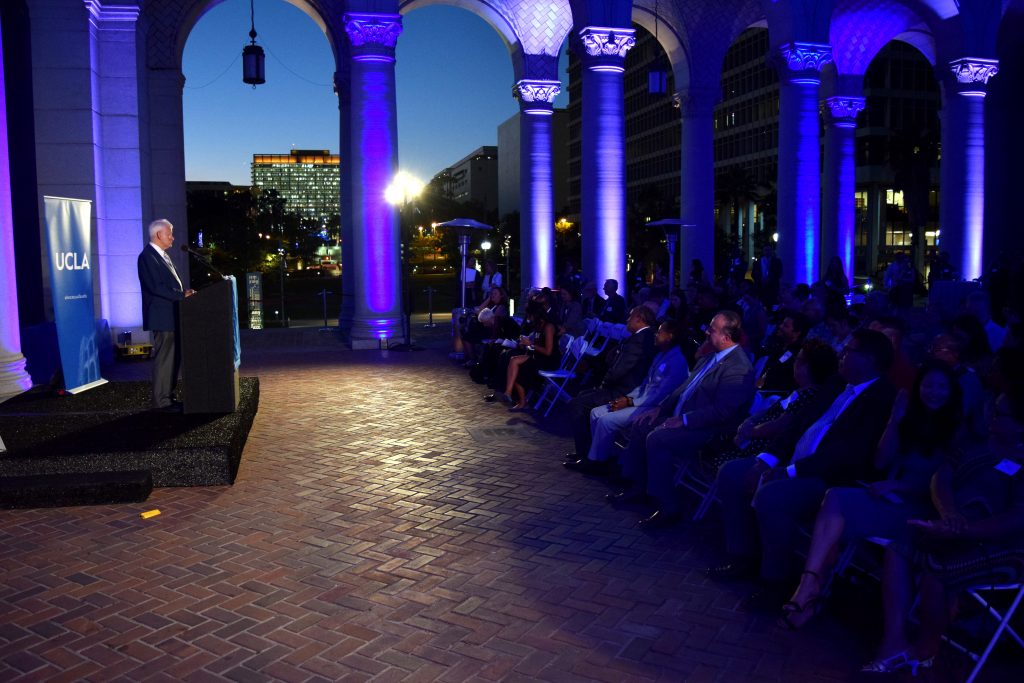 Chancellor Gene Block speaks to the crowd at the 2017 UCLA in Downtown L.A. reception.

“It makes a huge impact,” he said. “I’ve believed for years, anytime you can put a face to a name, it helps. And UCLA has the respect of everybody on this council and in this building, but when they converge on City Hall, things happen, and people learn. I think this is probably one of the most beneficial activities that the university conducts.”

In other meetings, advocates consistently raised the point with city and county officials: allow UCLA, which reaches to every corner of Los Angeles County, to be a resource.

In a meeting with Mike Bonin, who represents Los Angeles’ 11th district on the Westside, advocates pivoted to environmental issues. County Supervisor Sheila Kuehl, whose third district extends from West Hollywood all throughout the northwest section of Los Angeles County, grilled advocates on their programs and the needs of the county.

At Sherman’s final meeting of the day, she found herself chatting with two staff members from the office of Curren Price, who represents the city council’s ninth district, south of downtown Los Angeles. The district is home to the city-run Business Resource Center.

“We have instructors and experts that we could bring to support that initiative,” Sherman told the group as they exchanged information.

Reflecting on the day afterward, she said: “I feel energized, when I thought I’d feel tired. I think this was a good platform to start, and we will need to have a lot of conversations after, but I look forward to getting back to the office and writing those emails, and identifying those first steps.”

And it was a good thing she was not tired, because after 5 p.m. UCLA hosted its annual UCLA in Downtown L.A. reception, where numerous advocates and programs were feted. 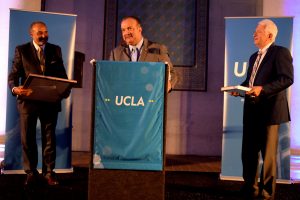 “Talking about the fact that we are a public university, that’s why we are here tonight,” Chancellor Gene Block said, as he greeted the crowd of 150-plus. “We are a public research university, as dazzling as any private university. But our commitment is so much broader, so much deeper.”

Block extolled the virtues of numerous programs that serve and partner in Los Angeles, including the Los Angeles Quality of Life Index, UCLA Institute for the Environment and Sustainability, Sustainable LA Grand Challenge, Black Male Institute and UCLA Volunteer Center.

“This is our home,” Block said. “Our engagement of Los Angeles is deep and there are many things we are doing currently.”

All of this was to say that UCLA is happy to be a part of its community. “Much of the strength of being UCLA derives from where we are — this diverse, powerful and dynamic city,” Block concluded. “The relationship is deep, it’s long and it’s important to us.”