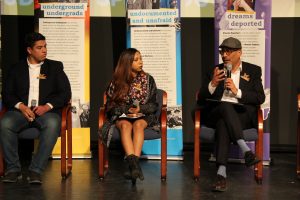 Diego Sepulveda, Johana Guerra Martinez, and professor Abel Valenzuela, who is special adviser to the chancellor on immigration, discuss DACA and related matters. (photo courtesy UCLA Institute for Research on Labor and Employment)

On the day that was once slated to mark the end of the federal government’s Deferred Action for Childhood Arrivals program, UCLA students, faculty, staff, alumni, immigrants’ rights leaders and community members came together to discuss DACA and the need for a comprehensive immigration policy and to encourage students to remember their value and persevere in the face of adversity.

DACA is an executive order enacted under then-President Barack Obama in 2012 that made provisions for some people who entered the United States undocumented as children to hold employment and not face immediate deportation for two-year renewable periods. On Sept. 5, President Donald Trump announced a move to end DACA and gave Congress a mandate to pass a replacement before protections began to expire on March 5. The courts have since blocked the motion; however there is still no resolution for the 800,000 undocumented immigrants who are DACA recipients.

“The solution is to continue to advocate, to have our voices heard,” Solis told the audience of more than 400 people. “And to demonstrate the power that each of you have and everyone that’s around you — your family members, your siblings, other Dreamers, people who are going through your same circumstances — to educate them about the value that you add to our society. Because I know each and every one of you do that … Those are the kinds of stories that the public and policy makers need to hear — your contributions.”

The evening also featured Abel Valenzuela, professor of Chicana and Chicano studies and urban planning and director of the UCLA Institute for Research on Labor and Employment, who spoke about his role as special adviser on the Chancellor’s Advisory Council on Immigration Policy.

A campus-wide message from Chancellor Gene Block and Valenzuela in support of international and immigrant Bruins was sent to the UCLA community earlier in the day. In addition, the University of California issued a statement urging Congress to pass bipartisan legislation for permanent protection of DACA recipients.

Students also gave a presentation detailing, among other things, the timeline of the creation and implementation of DACA, the guidelines for eligibility and the benefits and the limitations of the program, including the division it created between those who were eligible for the program and those who were not. Among the benefits afforded to DACA recipients are the ability to legally work in the United States and in most states to pay in-state tuition; recipients are still unable to receive federal financial aid.

More than 700 UCLA students are undocumented, and across the United States there are more than 1.8 million undocumented individuals under the age of 18. Of these, roughly 65,000 graduate from high school each year. The average undocumented family has an annual income of less than $30,000 making access to higher education and other basic services, including health care, challenging, the students said.

Each panelist spoke about their personal connection to the undocumented community, advocacy efforts and resources for people at UCLA who have benefitted from DACA and the temporary protected status program.

“Immigration is such a global issue, so for us we’re out in the community with the reality that we’re continuing to build the leadership of young people,” Sepulveda said.

He also spoke about the role that students have had in successfully creating change on and off campus, including the signing of DACA, and the efforts of the Dream Resource Center to help develop the next generation of advocacy leaders through programs like Dream Summer and the new Immigrant Justice Fellowship.

“We know that DACA is not the end of it,” said Sepulveda, adding that DACA is a platform for immigrant young people to leverage in their push for comprehensive immigration policy. “All of us in this room play a pivotal role in being able to shape conversations and to be able to get us there. To be able to say that our communities deserve justice, our communities deserve dignity. We’ve been here before DACA, we were here during DACA and we’re sure as hell going to fight to be here post-DACA.”

“We keep fighting all the cases we need to fight to keep families together,” said Simjee, who provides assistance for those in need of immigration services and who may be eligible for various types of permanent relief, not just DACA.  “I want to make sure that in addition to short-term temporary protection, we’re looking at other humanitarian options like special worker and juvenile status, visas for victims of crime and victims of trafficking, asylum, family petitions, and now as we have a growing class of alumni, we want to look at options of employment and other opportunities that might exist beyond DACA. We will rise to the challenge and continue to expand our services as the community needs it.”