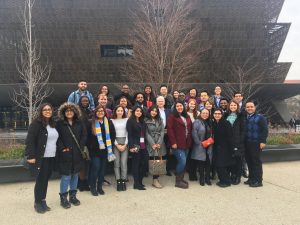 When UCLA students lined up at a diner counter top replica in the National Museum of African American History and Culture for an interactive exhibit, they were handed touch screens that asked them questions about how they would respond to living through the Civil Rights Movement. This opportunity to imagine living as someone else aligned with a major goal of Chancellor Gene Block’s recent trip to Washington, D.C.

“It gave you the chance to sort of feel what those people felt when they were doing a sit-in,” said third-year Naomi Kisel, who is a first-generation college student whose parents fled the Soviet Union for a better life and identifies herself as a political conservative.

Kisel and more than 20 other UCLA students were chosen to visit Washington, D.C. in mid-December for what is becoming an annual trip with the chancellor. The students were chosen to represent a broad cross-section of backgrounds and experiences on campus. For UCLA administrators, the trip is an opportunity to help students burst constructed bubbles, engage them with professionals and inititate dialogue with one another. 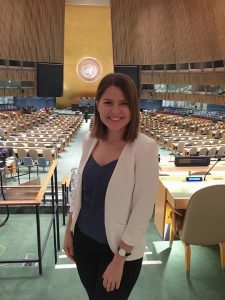 “I got to do things I never thought I’d get to do and I made friendships with people from different parts of campus who I probably would never have met outside of this trip,” Kisel said.

Students visited with groups that advocate for causes including people with disabilities, civil rights, the environment, transgender equality, Muslim people, as well as free markets and limited government.

“We hope the trip exposed them to ideas they may not have considered before, introduced them to people they may not have otherwise met in their time at UCLA, and encouraged them to continue asking questions about how they can build consensus across differences and open dialogue instead of shutting down opposing views,” said Maria Blandizzi, UCLA dean of students.

As a Latino, first-generation, transfer student from Inglewood, Armando Lizarraga said he has taken it upon himself to be prominent on campus and to tell his story. The D.C. trip was a perfect outlet to continue that trajectory.

“I really wanted to kind of make myself visible and bring my narrative and experience to the table, and to add that into the discussion with Chancellor Gene Block and administrators on the trip,” said Lizarraga, who is in his fourth year. 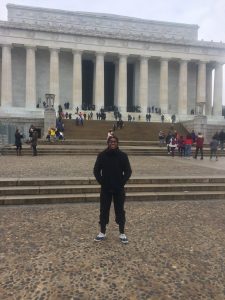 He said the trip to the National Museum of African American History and Culture, “showed how the struggle is universal” and he came out of it with a greater sense of solidarity. The whole trip was that way to him, he added. “It was interesting for me during our first meeting to see the different ethnic backgrounds and people in different leadership roles. You hear a perspective, and somebody who you don’t normally talk to, and normally you might shut down. So this really allowed for self-growth.”

Joel Forcheney, a fourth-year, said traveling to D.C. was about professional, as much as personal, growth.

“I wanted a better understanding of how health policy is run in D.C.,” said the microbiology, immunology and molecular genetics major.

Forcheney, who volunteers with black student groups at UCLA, said he appreciated the opportunity to learn the stories of people he doesn’t usually interact with on campus.

The mix of people, politicians and historical culture in Washington, D.C., provided a great setting for these interactions.

“I think the main thing they were pushing for us to do, was meeting with other students,” said Vanessa Young, third-year history and global studies major. “All of us were from different parts of campus, or people who I otherwise would not meet at UCLA or have interacted with.” 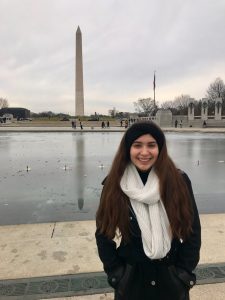 The Holocaust Museum was a really incredible experience, Young said. The UCLA contingent talked with someone from the museum about issues that echo those times and the idea of history repeating itself, like how refugees are treated today.

Beyond museums and cultural hotspots, students were also were able to meet with Capitol Hill staffers who work for Democrats and Republicans, and were even treated to impromptu meetings with U.S. Reps. Ami Bera (D-California) and John Yarmuth (D-Kentucky).

“It was really helpful to hear from these elected officials,” Kisel said. “They seemed very honest and eager to talk to us. They seemed happy to have students there ready to learn rather than having a specific agenda.”

Added Young: “We had people from both sides of the aisle, and seeing the way they interact as professionals with civility, and when they talk about the other party, it’s just completely different than what you hear in the media.”

Students also said the opportunity to spend time with UCLA administrators was valuable. “I think seeing them every day and hanging out with them — it is a formal setting, but it really just humanized my understanding of them,” Young said. 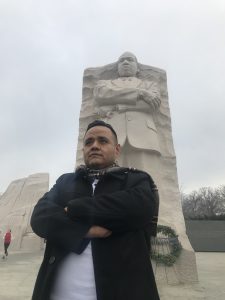 And while all the students have now embarked on the 2018 winter quarter, they know they have new friends and allies on campus.

“Those friendships and resources are a real highlight,” Lizarraga said. “It’s great now seeing those faces around campus where I previously wouldn’t normally say, ‘Hi,’ to, it goes back to the purpose of the trip — of diversity and inclusion.”

“I wanted to get a better understanding of their experiences on campus, and equate that with my experiences, which actually did end up happening,” Forcheney said. “I’m pretty sure I’ve seen their faces around campus before, but hearing their stories and different takes on the world, it really opens your eyes.”

“I wanted to learn from my peers, get close to a group of students, and ask them questions,” Kisel added. “What part of your identity has driven you to believe this? Why are you drawn to this specific issue? We really got to that. That’s exactly what I wanted.”