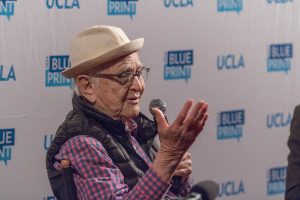 TV producer Norman Lear had the crowd eating out of his hand during a conversation punctuated with jokes and sharp observations. (photos by Les Dunseith)

Television producer Norman Lear is one of the most influential people in his business. On the night of Jan. 17 in the Real D Theater in Beverly Hills, the 95-year-old creator of some of TV’s most legendary shows — who is still working on two current shows — gathered with members of the UCLA community and the public to reflect on his career, philanthropy and advocacy efforts after a screening of the documentary “Norman Lear: Just Another Version of You.”

The screening was part of a special conversation hosted by UCLA’s public policy magazine, Blueprint — the latest issue of which focuses on philanthropy. Editor-in-chief Jim Newton moderated the event.

“[Lear] inspired us to start conversations that were at once contentious, but also necessary,” UCLA Chancellor Gene Block said. “Norman’s contributions extend into philanthropy and activism as an outspoken champion of civic engagement and constitutional freedoms. Luckily for us, even at 95 years old, he’s not done yet. He still remains extremely active.”

Lear is best known as creator/producer of classic television shows such as “All in the Family,” “Good Times,” “The Jeffersons” and “Maude.” He also gained national notoriety when in 1981 he founded the liberal political organization People for the American Way. Over the years he has backed campaigns to register young voters, donated to organizations that fight climate change and sponsored a trust and awards to recognize and encourage businesses to think beyond the short term.

“I’m known to be quite liberal, progressive, etc.,” he told the packed room of about 130 people. “I think of myself, truly, as a bleeding heart conservative. You will not ‘eff’ with my First Amendment, my Bill of Rights, my Constitution or my Declaration — every single word of it. My dedication [to] life, liberty and the pursuit of happiness for all Americans could not be stronger.”

Lear is especially lionized for the issues his shows tackled, particularly for minority communities and cultures.

“Norman Lear is an artistic pioneer, a social activist, and my favorite line from the documentary, a patriot,” said Gary Segura, dean of the UCLA Luskin School of Public Affairs. “[He is an] artist who was willing to shine a powerful spotlight on race relations and bigotry, at a time when America was completely unprepared to face the realities of the 1970s. That was Norman Lear.” 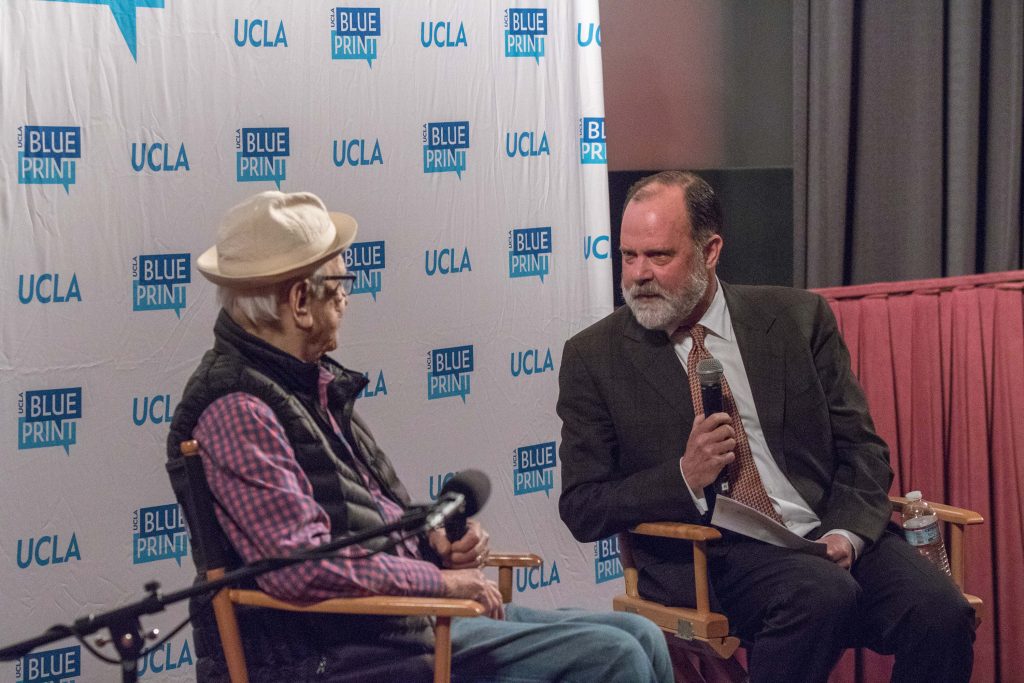 Lear is credited with putting “Good Times” and “The Jeffersons” on the air, two shows that concentrated, for the first time, on African American families.

“Esther Rolle and John Amos were playing the very first black parents on the tube,” Lear said of “Good Times.” “They were representing their entire race, who had never, ever been represented before. And I realized shortly into rehearsal, just from questions and conversations and body language and everything else, just how much weight was on them. They were alone in representing their race.”

Even now, Lear notes the need for further work. “Is there anyone in the audience who thinks we’ve finished the discussion on race?”

Many of the issues that have concerned Lear throughout the years have persisted, and he is no fan of the current people residing in the executive branch, but he did encourage people to keep pushing forward.

“The American people look and say, ‘This is the kind of leadership you have to offer? Then take that,’” he said referring to Trump winning the presidency.

“I believe we’ll get through this,” he said. “There is always going to be someone breaking through, nothing is going to change that … There hasn’t been a time that hasn’t been exciting to be alive. The fact is it’s taken me 95 years … to get here doing this. Every split second, it has taken me to sit here and do this. And it has taken every split second of your lives to watch me. And if you add up your numbers and mine, I’m way ahead of you.”