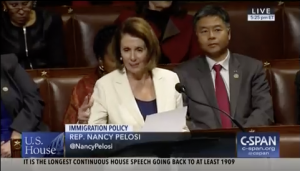 Democratic Leader Rep. Nancy Pelosi (D-San Francisco) spoke on behalf of Dreamers and DACA recipients for eight hours and seven minutes on Feb. 9, hoping to pressure House Speaker Paul Ryan to take up the issue for a vote.

The move was slightly unusual for the House of Representatives, as there is no equivalent to the Senate filibuster. However, the Speaker and the Majority and Minority leaders are allowed to hold the floor continuously after recognition from the Speaker. This was the longest continuous House speech dating to at least 1909.

“Dreamers” refers to young immigrants who were brought to the U.S. as children and have been shielded from deportation by the Deferred Action for Childhood Arrivals (DACA) program. Created in 2012, DACA has allowed nearly 800,000 undocumented people to legally live, work and study in the U.S.

Earlier this year, Senate Majority Leader Mitch McConnell promised to have an open debate in the Senate on immigration, with senators of both parties allowed to offer amendments. Pelosi said of her time on the floor, “Our basic request is to honor the House of Representatives — give us a chance to have a vote on the floor.”

With help from Rep. Ted Lieu (D-Los Angeles), whose district includes UCLA, several student stories made their way before Pelosi, who read them aloud to her colleagues and the nation. Below, are several of those clips.