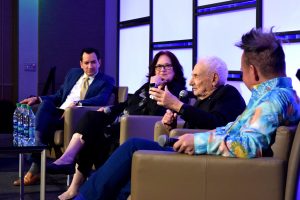 When California Assembly Speaker Anthony Rendon looks to make sense of the world in a time of uncertainty, he said he has often looked to his own state’s diverse and exceptional art community.

“There has always been this sort of rendering of California as different than the rest of the country,” Rendon said. “And that’s always been interesting to me, and there seems there has been no better time to discuss this than there is now.”

Rendon has been traveling the state hosting the Speaker’s Lecture Series, and his stop at UCLA Covel Commons on Feb. 8 centered on California exceptionalism, and more specifically, three panelists who embody the strong and robust art community in Los Angeles. Rendon hosted Judy Baca, muralist and professor of Chicana and Chicano studies and world arts and culture at UCLA; world-renowned architect Frank Gehry; and theater director Peter Sellars, UCLA distinguished professor of world and arts and culture/dance.

UCLA Government and Community Relations, the Center for California Studies at Cal State Sacramento and the UCLA Luskin School of Public Affairs presented the event. Rendon hosted a reception prior to the event with student leaders.

“This will really examine what makes this state a different place in a context of a country that is evolving faster than some of us counted on,” said Gary Segura, dean of UCLA Luskin, as he introduced the panel. 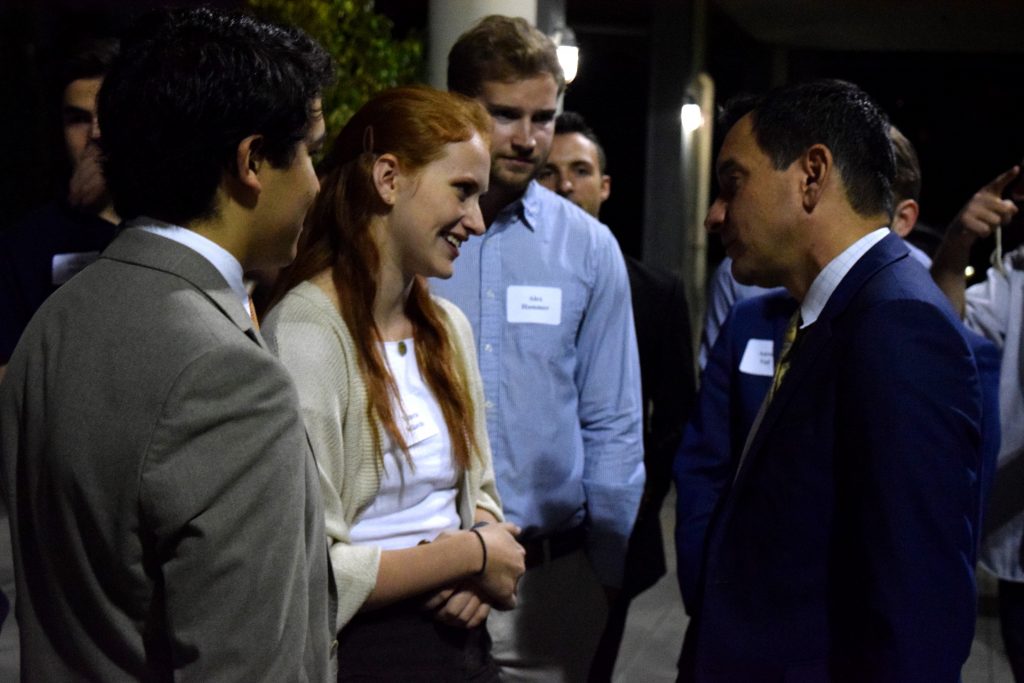 Before the panel, Speaker Anthony Rendon hosted a reception where he chatted with UCLA student leaders.

Approximately 175 students, faculty, staff and members of the public sat raptured for an hour and half as Rendon led the artists through a host of questions and topics — and first and foremost, what it means to be a Californian, and specifically an artist in California.

“I live in a place where there are fusions of these people, and inventions spur of the moment, because there is a cross-pollination,” said Baca, who was born in Watts and is known for the Great Wall of Los Angeles public mural at the Tujunga Wash, a flood channel in the San Fernando Valley. “I am an exact example of a person who comes from these cross-pollinations.”

She joked that she originally started the mural project because she was “trying to get even with the river, but then I fell in love with the people I was working with. The wash was a place that was neutral and set apart, a completely different world where we could make something different and tell our story.”

Sellars said he was drawn to California by its beauty and its lack of artistic orthodoxy, and he remains because its challenges, like homelessness, are right in front of you.

“One of the most important reasons to me about living in L.A. is that every single day you are up against what you have so failed to solve, what you cannot deal with, and what is way more than you are,” Sellars said. “And you are challenged every single day in this city to get real … For me, that reminds you when you wake up each day as an artist: What are you going to do? And what are you waiting for?”

Gehry, who is perhaps best-known for the Walt Disney Concert Hall in downtown Los Angeles, said he was attracted to Los Angeles from his native Toronto because of the freedom it presented. “It was inspirational, it was alive, and you could try things and grow. And I still think some of that is true.” 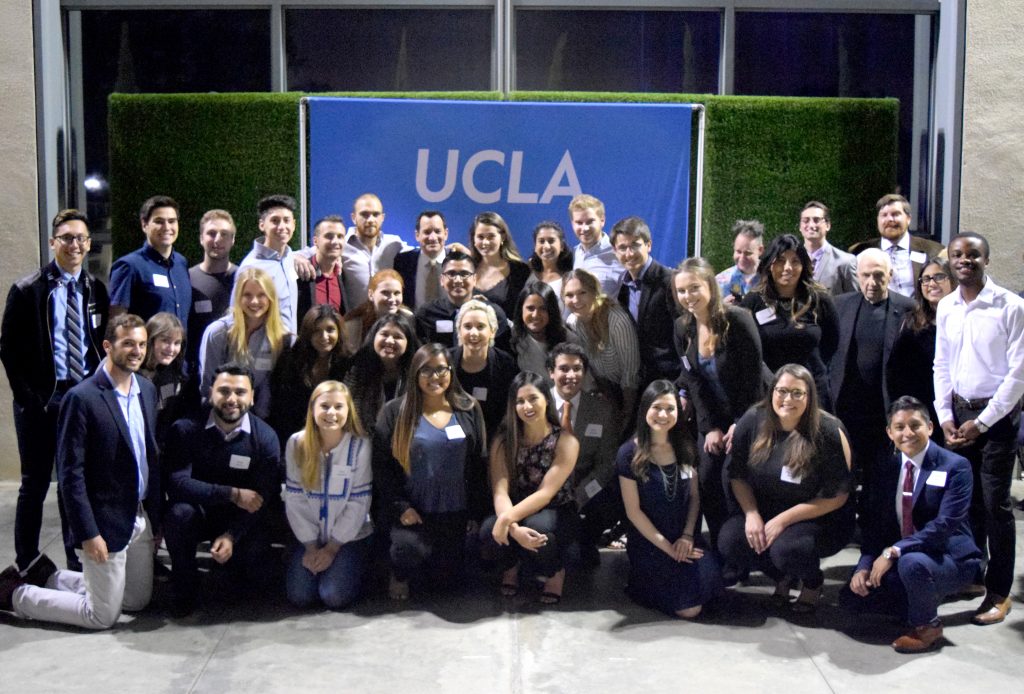 The panel took a moment to snap a picture with reception attendees.

He cited how California influenced him through its cultural melting pot, including cultures from Asia, and neighboring Mexico. He even explained why he took post-modernism to such an extreme.

“If they really felt they had to go back to the past, why not go 300 million years back, to fish. That came out by accident, I didn’t plan that,” Gehry said. “Then I started drawing fish and thinking about it, and I realized I had fallen into it. What gives scale to building? Is it possible the expression of movement in architecture could supplant decoration and give feeling to the building? So that’s where I went with it, and it led to a few funny buildings. So it’s a fish story.”

“Thanks for the funny buildings,” Rendon quipped, as the audience and panelists laughed along. 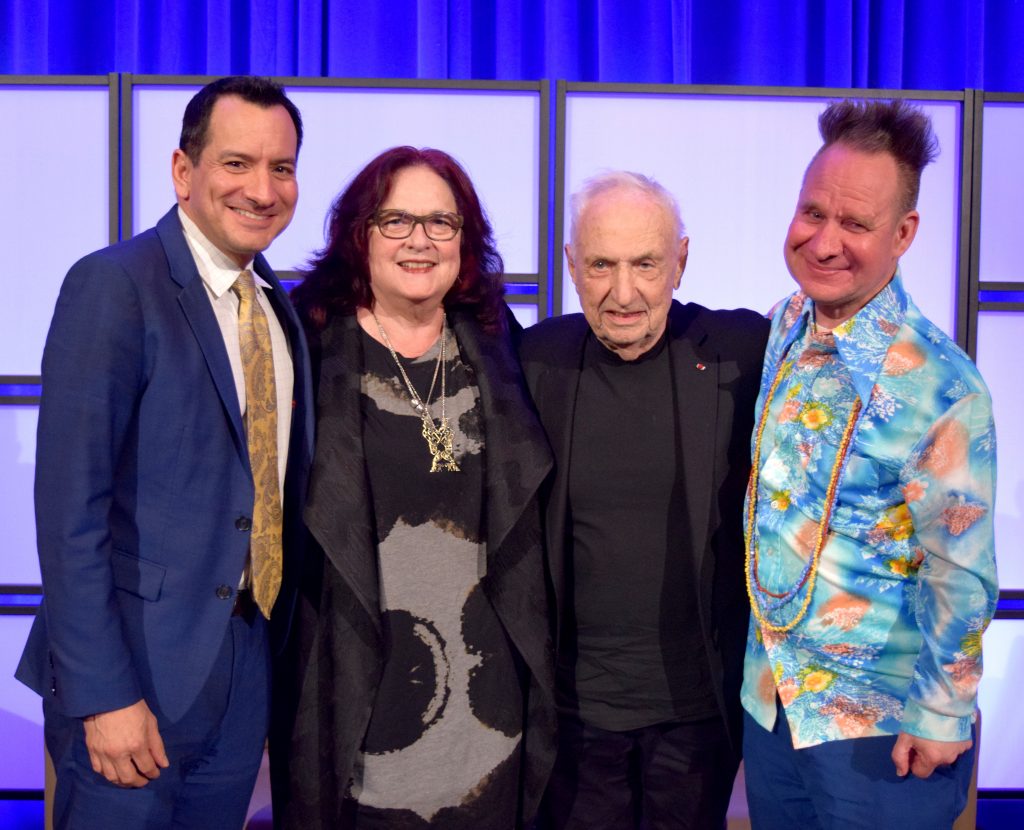 Because the three panelists represent such public artistic disciplines, Rendon said he couldn’t help but harken back to the days of the Works Progress Administration and federal arts projects that were created during the Great Depression. “Eventually they became this incredible program that gave birth to so many great artists and great buildings.”

“I think it is a wonderful time to think about how artists can be citizens and part of the civic dialogue,” Baca said. “A place where people can speak without impunity, where they can come from the heart and from their experiences — this is really the arts. Public art flourishes when there is support. It has to be done with government support and access to public space. I think that is critical.”

“Most Americans do not associate work with creativity,” Sellars said, lamenting that the American workplace has hurt citizens’ desire for creativity. “It’s crucial that the population feels creative.” 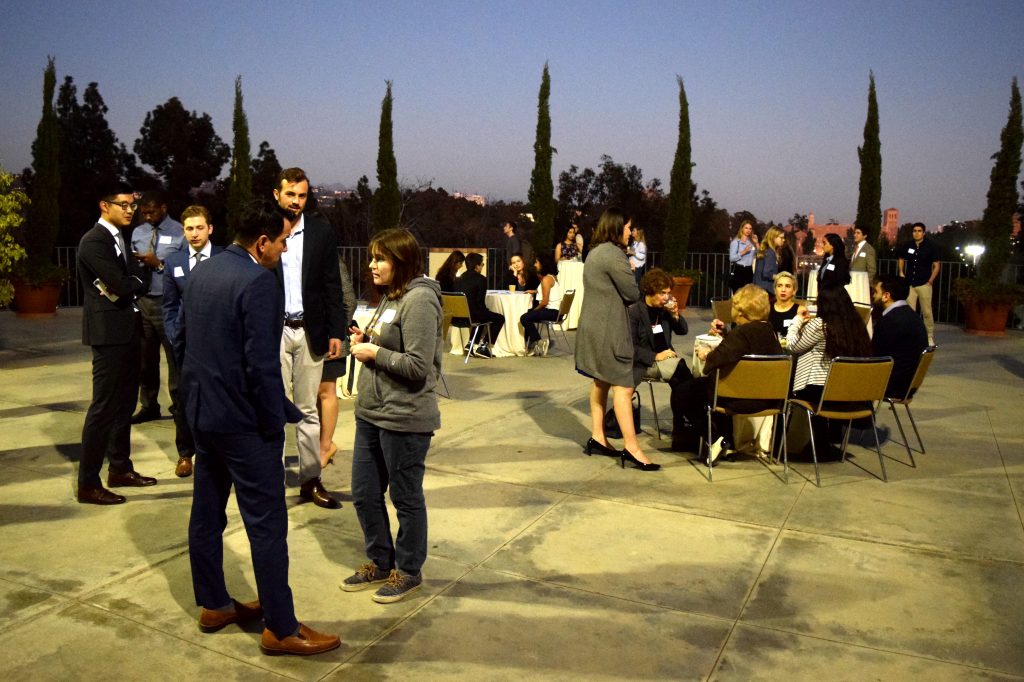 The reception gave Speaker Anthony Rendon a chance to talk with students one-on-one and in groups.

Public art, they all said, is an important mirror to what ails society. The panelists also talked about how California is contributing to mass incarceration.

“Everything is to make them feel like nothing,” Gehry said of his examination of the prison and jail systems and the inmates who are housed in them. “I don’t know what we are going to do about it, but it is a big issue. Basically, you are not treated like a human being.”

Gehry also intersected with Baca about the Los Angeles River, as he has been asked to examine and help figure out paths forward for the 51 miles of concrete jungle. These issues, as a public figure and artist, he noticed, become hard to ignore. “Once you get into it you get caught,” he said, later adding about all the different proposed fixes. “If you start to do 10 of those things you can change the community.”

Ultimately, the panel implored the audience to not despair, but to express, and to create communities and partnerships of expression.

“The best art is made in the worst times, because people actually need pleasure,” Sellars said. “They need a whole other layer of their lives to be alive and thrilling.”