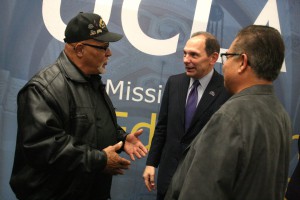 Los Angeles service providers and the city and county housing authorities have been coming together to reach the White House and Veterans Administration’s goal to end veterans homelessness by 2015, successfully housing over 300 veterans every month.

Unfortunately, for this region, there is still a long way to go.

“What Los Angeles has to do in a month to work toward ending veterans homelessness, other cities need to do in a year, or had to do to complete their entire program,” said VA Secretary Robert McDonald, who was on the UCLA campus Thursday encouraging landlords to rent to veterans through the HUD-VASH voucher program, which pays fair market rates for rental units. He opened by thanking UCLA for hosting the meeting and acknowledged the decades long partnership between UCLA and the VA.

Los Angeles has more than 4,000 homeless veterans according to the most recent statistics, making up 10 percent of the nation’s total.

While current collaboration in Los Angeles between the VA, the city, county and service providers is unprecedented, there is still a gap. 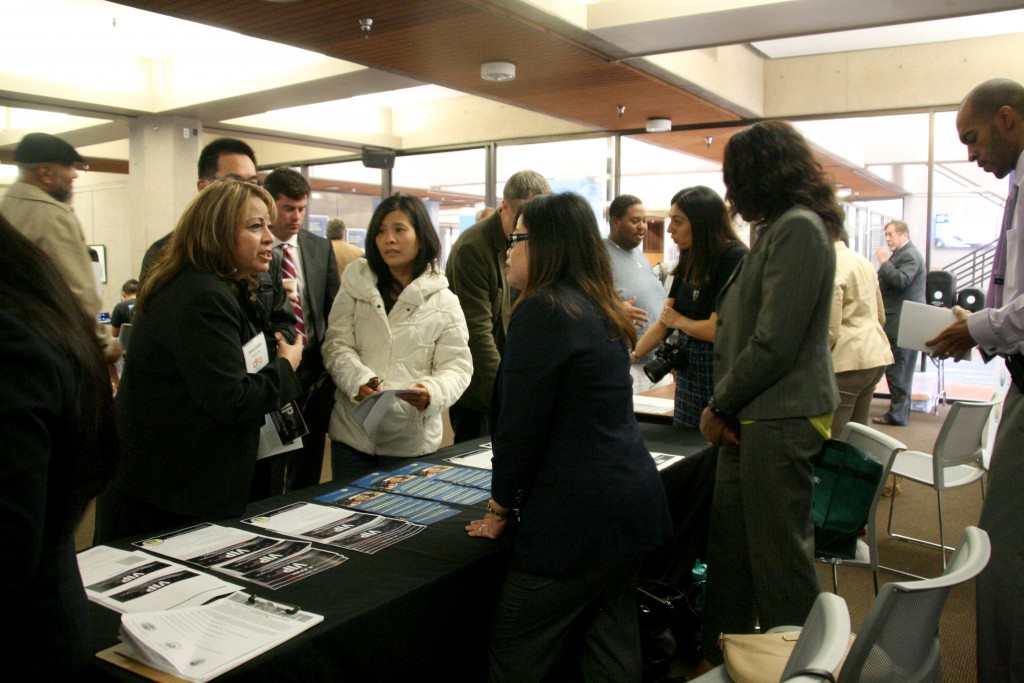 Members of the city and county housing authorities, along with United Way, were on hand to provide resources and information. (photo by Jonathan Van Dyke)

“There are 1,000 veterans out there in Los Angeles with HUD-VASH vouchers in their hands right now who cannot find housing,” McDonald said.

The meeting was a special opportunity for the VA Secretary himself to implore landlords to be part of the solution, offering them the information they need to see the value — communal and financial — of renting to veterans.

Sam Tsemberis, founder of Housing First, the model being used by the city and county to end homelessness, said that housing a veteran is a great service to veterans and the Los Angeles community. 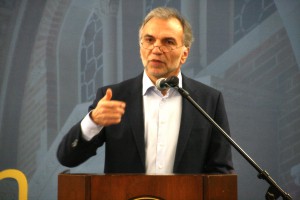 Housing First is as simple as it sounds — stable, permanent housing is the best way to end homelessness. Employment programs, counseling and addiction or mental health treatments are important second steps, depending on the individual.

“If we wait for people to get better before we house them, we have a 30 to 40 percent success rate. If we house first, we house 80 percent of those we need to house,” Tsemberis said.

He also emphasized that the voucher program is great because it allows veterans the housing options integrated into the community they want, and that ending homelessness improves an entire community’s quality of life, not just those who were homeless.

With HUD-VASH, a social worker is assigned to a veteran using a voucher for housing, and that person will visit with the assigned veteran daily, weekly, monthly, or whenever needed in their home.

Douglas Guthrie, President and CEO of the Housing Authority of the City of Los Angeles (HACLA), which runs the largest VASH program in the country, was also on hand at the meeting, and described efforts to improve the program and what landlords can expect. 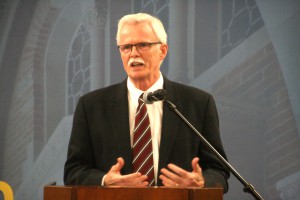 Douglas Guthrie of the Housing Authority of the City of Los Angeles speaks about the challenges of veteran homelessness. (photo by Jonathan Van Dyke)

In addition to providing security deposits and other move-in assistance for veterans using the vouchers, including furniture, the city has partnered with the county health department to provide a holding fee, which offers financial compensation for landlords waiting for units and leases to be approved for the program. HACLA has also expanded its property compliance fund and damage mitigation funds, and is beginning to bring handymen to inspections so problems with units can be addressed immediately, cutting down wait times for approval.

A major improvement also includes the increase of maximum value of the voucher to 120 percent of fair market rent. This allows a voucher to pay for rent up to $1,500 per month in some areas, much needed for a region like Los Angeles where the demand for housing is so high that rents are driven up quickly, Guthrie added.

Case managers from the VA are now embedded in HACLA offices, which allows the VA to work more closely with tenants, and processes have been streamlined so that inspections are turned around in two days and leases in 30 days.

Landlords also heard from Mykesha Robinson, a U.S. Air Force veteran who spent one year sleeping in her car when she came to Los Angeles to try to start a business with few resources. She expressed her gratitude for the HUD-VASH program case worker who brought her in and helped her get housing through the program, as well as to the landlord who rented to her. She is now a successful business owner living in Beverly Hills. 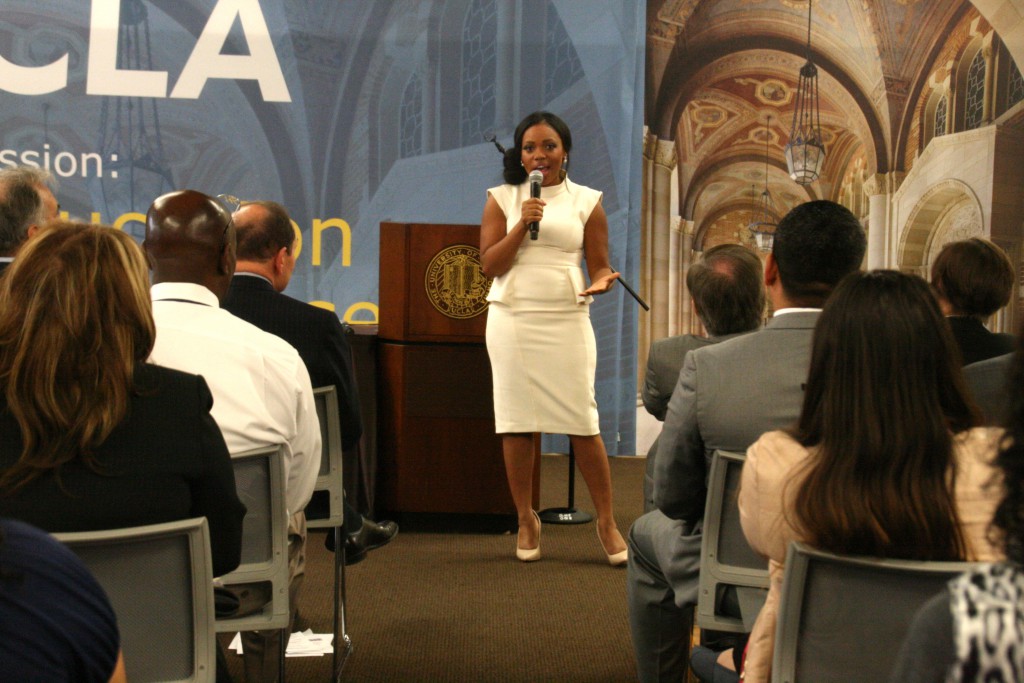 Formerly a homeless veteran, Mykesha Robinson shares her story of going from living in her car to becoming a successful business owner living in Beverly Hills. (photo by Jonathan Van Dyke)

“Look at the potential and outcomes that you can create for a person and their entire family,” she said.

Mac McClendon, a landlord in Palmdale who said he plans to rent two units that will soon be vacant to veterans through the program, said, “Any homelessness in America is a travesty. Any homelessness for our veterans is a national embarrassment. They gave their all for us, we have to do all we can to do the same for them.”

McDonald hoped that landlords would be emboldened by the presented information.