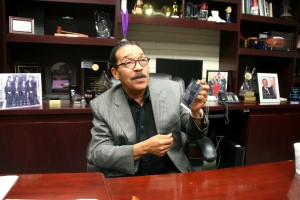 Los Angeles City Council President Herb Wesson was once that kid in the audience — antsy and uninterested.

Sure, his upbringing included plenty of civic engagement. His father coached youth sports and stayed active in the community. Wesson remembers passing out flyers as a kid in Cleveland, Ohio in support of Charles Stokes, the first African American mayor of a major city.

“My family, historically, we were engaged,” Wesson said. “It was at a time when we had a lot of civic courses and social studies. It was a way to connect with local governments and what have you.”

And yet, it wasn’t until he went to college, and still then, Wesson often found himself in the crowd, looking for an exit strategy. Then one day, his fraternity was hosting special speaker: Northern California’s first black Congress member, Ron Dellums.

“I was one of these guys — I didn’t like to listen to lectures or speeches,” Wesson said. “But since I was on the escort committee, I couldn’t do what I normally do and sit in the back next to the door, and then when there was a lull, walk out.

“I ended up sitting in the first row, and I had to stay there. And 10 minutes into his speech — talking about human and civil rights, talking about partnership and partnering with the gay and lesbian community, that together we could do all these great things — that’s the moment in my life. Ten minutes into the speech, I remember turning to my fraternity brothers who were behind me, saying ‘That’s what I’m going to be.’”

“When I was selected (California Assembly) Speaker of the House, Ron Dellums came,” Wesson said with pride. “I did make sure to mention he inspired me, and he cried. It was a real touching moment. He is a member of my fraternity and he inspired me.”

Wesson has been connected to UCLA since his early political days. He sees higher education as a breeding ground for access, inspiration and hope — the kind of place where he found his.

He graduated from Lincoln University, the oldest African American Liberal Arts School in the country. He was a history major.

“For me it was about the experience that nobody in my family ever had,” Wesson said. “I was the first person on the Wesson side to go to college, stay on campus, and all of that.”

Upon graduating, Wesson decided to leave home, something his father suggested before passing (“He was adamant about that.”). There were two options for starting his political career: Atlanta or Los Angeles.

“I came here with 1,200 bucks in my pocket and no friends or family,” he said, noting he arrived during the Tom Bradley era. “What I found out quickly, is that this was probably one of the most difficult businesses or careers to get into. It’s not like you can just go and apply.”

Wesson said to become civically and politically engaged, creativity is needed — and maybe even some desperation. He started volunteering at a Republican headquarters where the people were looking to open the party up more to minorities.

“What I began doing then was just volunteering,” he said. “And then these people couldn’t get rid of me. I tried, and tried, and when I got my opportunity, I didn’t screw around. I was laser-focused.

California State Senator Nate Holden gave him his first chance and Los Angeles County Supervisor Yvonne Burke continued his political education. “There was a time I was on everybody’s shortlist for any opening,” he said. 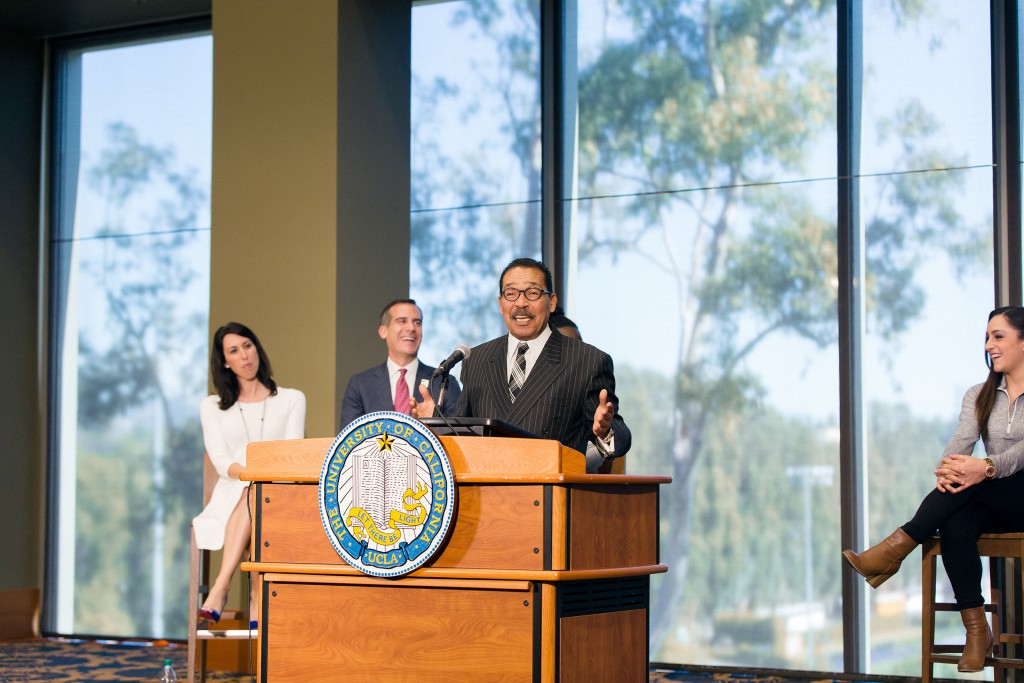 Through Burke, Wesson gained his first UCLA connection: helping put together a nonprofit that would give scholarships to UCLA students. Before the turn of the millennium, Wesson finally took office, winning a seat to the California State Assembly.

“When I got to the capital, it was just kind of natural for me,” Wesson said. “And then when we did redistricting, I was able to maneuver and get UCLA into my district. It’s one of the colleges that I have the utmost respect for academically, and being a sportsman, I’ve always been a fan of UCLA.”

Presented a special badge from his District inauguration at Royce Hall, Wesson just repeats the word “Wow” at the blast from the past.

“I wanted a wang, dang, doodle of an event and we selected UCLA,” he said. “With cooperation from the university and others, we had an event with over 2,000 people from the community. It was an unbelievable experience.”

Wesson said he also looks fondly on the commencement speech he gave in 2002 to the Luskin School of Public Affairs — something that was a thrill, even though he was very nervous.

The university was never far from the conversation during his days in the Assembly.

“UCLA has been very aggressive in a positive way in wanting to participate in shaping the future,” Wesson said. “One of the reasons UCLA has such an impact on Sacramento is its desire to engage. You’ll find their fingerprints in one way or another on any kind of education package or policy.” 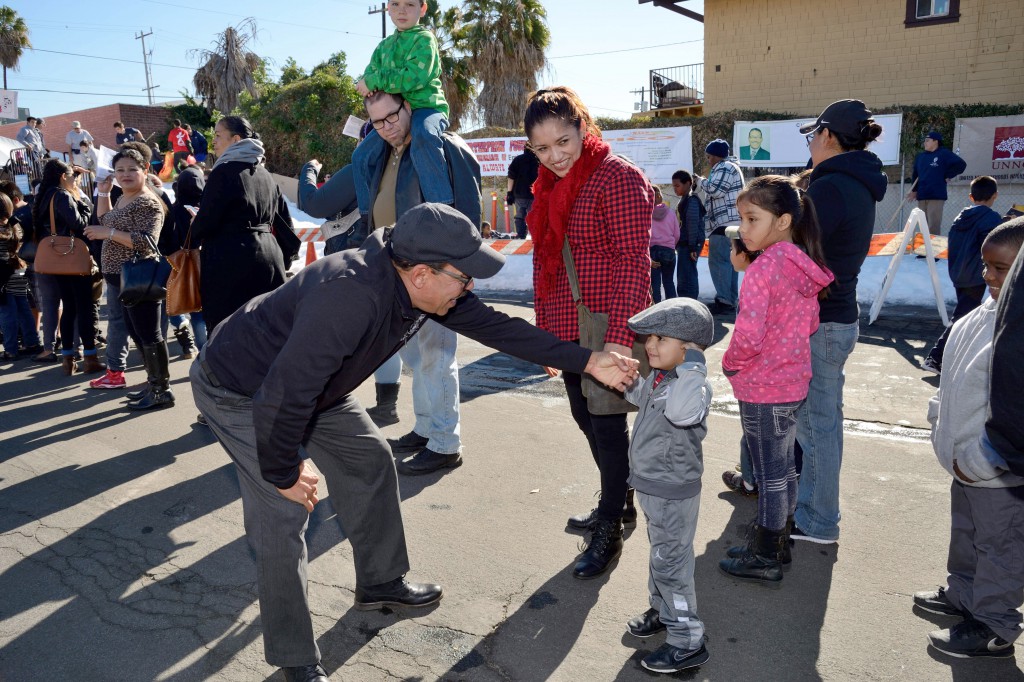 From the Assembly to the Los Angeles City Council in 2005, Wesson said he may no longer directly represent UCLA, but he remains close to the institution, and it is also important to tout it in the underserved areas he represents.

He sees his position as Council President as a coach or quarterback, keeping the system moving smoothly and efficiently.

“What I try to do is keep us focused on the big issues, and then do everything I can at helping the other members succeed in their personal issues and personal promises to the community,” he said.

In 2015, UCLA Downtown Day in LA focused on homelessness in the city and county, and Wesson said he and his colleagues were pleased with the presentation.

“On homelessness, I think we’ve been successful in at least getting all the levels of government to recognize this is an important issue — a crisis issue — that we need to address,” Wesson said. The Council has earmarked millions and formed a standing committee for recommendations on how to properly use the money.

Another area the two institutions may partner on would be the 2024 Olympic bid. On Jan. 25, officials announced that UCLA would play host to the Olympic Village should Los Angeles win the bid.

“We have to figure out and create a plan to compete for the games, and yet still protect the city financially,” Wesson said. “I am optimistic we will be able to do that. In the event that we are successful, I cannot think of any entity in the city that will not benefit from it. UCLA and others will play a critical role.”

City Hall’s doors are always open — close to half the council have direct UCLA alumni ties.

“If I have an issue, a problem, or need some data, I can make a call right this second and coordinate a meeting with whomever I need to work with at UCLA,” Wesson noted. “A lot of what UCLA does, I think people would never really know what it is, because it’s not the face of the issue, but it’s the support they supply to the government. And when I say government, I say all levels.”

Conversely, Wesson and several fellow council members made sure to visit UCLA in 2014 to show support after a water main break allowed millions of gallons to flood the campus on Sunset Boulevard. 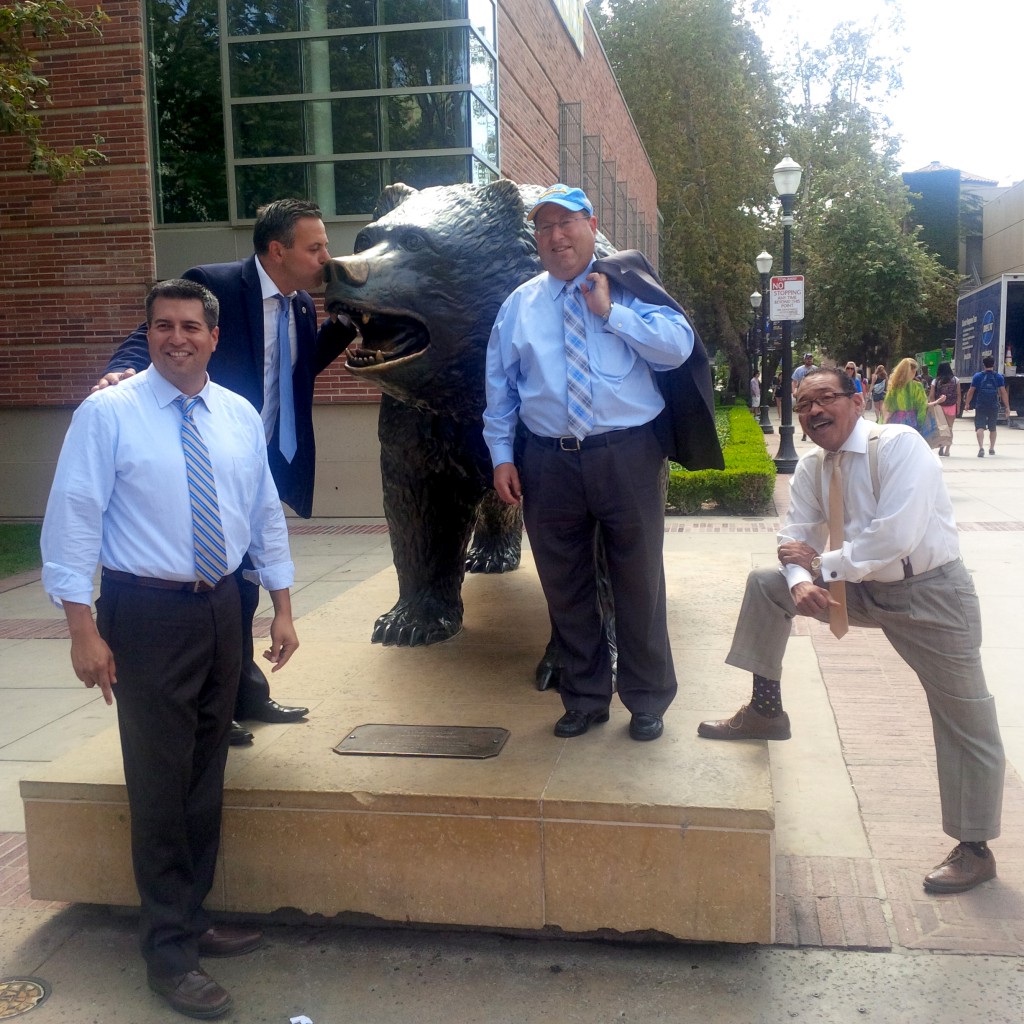 During a visit to inspect the water main break that flooded campus at Sunset Boulevard, Council members (from left) Felipe Fuentes, Joe Buscaino, Paul Koretz and President Herb Wesson enjoy a moment with the bear statue in Bruin Plaza. (photo by Keith Parker)

And now Wesson, like many politicians and community organizers, is faced with creating a new legion of young people dedicated to the idealism of U.S. governance, and finding a way to make rules that inspire.

“We need to go back to the younger kids and we need to really work with the school boards,” Wesson said. “There was a different level of political participation and I think a lot of that comes from the fact that we were taught these things at a young age.

“Another thing we need to do is make it easier for people to participate. If that means having voting somehow by computer, or having polling opportunities where the people are going to be — like in shopping centers — we need to look at that. Every high school should have a polling place run by the students. You just have to be creative in the way in which you get people engaged and I think it is important that we focus on the youth.”

Most recently, Wesson spearheaded the city changing its election dates to coincide with presidential and gubernatorial elections in an effort to propel a higher voter turnout — but that is just one of many necessary steps.

“Participating in the government of your country, state and city, it is not an elective, it is a responsibility,” Wesson said. “All of us should be engaged.”