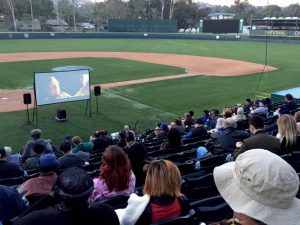 More than 200 veterans enjoyed ribs and good company during the inaugural Veteran Movie Night at Jackie Robinson Stadium on March 11, a new event series meant to further activate the hallowed baseball grounds as UCLA and the West Los Angeles VA continue to strengthen their partnership.

“UCLA has a longstanding relationship with the VA through various entities on campus including the medical side, athletics, recreation and others. We, at Athletics, have been trying a number of things to activate that space as part of that continued effort,” said Tracy Huth, UCLA Athletics special assistant to the athletic director.

A major partner for the special event was the Gary Sinise Foundation, which sponsored the food and provided volunteers who served Chicago Ribs for a pre-movie meal. The movie choice this time was obvious, organizers said, choosing “42”, which is a biopic on the life of Jackie Robinson.

Veterans from the West LA VA, and other Los Angeles-area groups, were allowed to enter the stadium as early as 4:30 p.m., enjoying some late afternoon sunshine filtering onto the field before the food was served. The movie began at dusk. 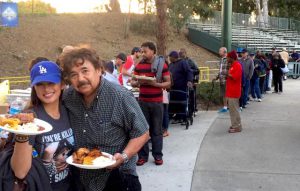 Veterans line up to enjoy a rib meal before sitting down for a special showing of “42”.

“It really embodies the idea of breaking bread with each other, especially at this movie night where we invited other groups, from World War II veterans to those who just got out of the service. For us it was great to see everyone communicate about his or her different service throughout the years. It’s really great to see them get together and meet and mingle,” said Hannah Hauserman, Manager of Programs & Events for the Gary Sinise Foundation. 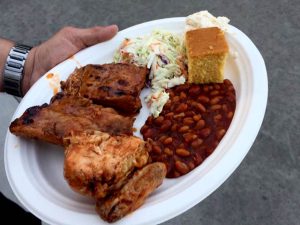 The Gary Sinise Foundation was on hand to serve a special meal of Chicago Ribs.

For UCLA, this was another opportunity to open up the gates at Jackie Robinson Stadium to its veteran neighbors. They piped the movie sound through the stadium’s system and set up a special giant projector screen between home plate and the pitcher’s mound, allowing veterans to sit in the stadium’s premium seats behind.

“We were thrilled with all these partnerships coming together, and being able to have more than 200 veterans attend the event. It flowed very well, and they seemed appreciative of the event, asking when we were going to do it again,” Huth said, adding there may be another movie night in June. “Everyone was very happy and very positive about the results and we know this was a good first-time event.”

“It was great,” Hauserman added. “We all had a great time and I think the veterans really enjoyed it.”