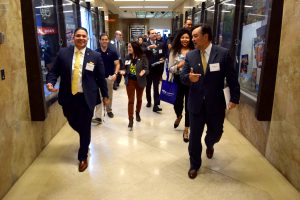 UCLA advocates take to the hallways of the State Capitol on UC Day in Sacramento. (photos by Jonathan Van Dyke)

At any given moment on March 8, the hallways of the California State Capitol bustled with enthusiastic Bruins extolling the virtues of renewed and continued investment in the state’s public higher education system.

If you turned down one corridor, you found one group of campus representatives patiently going over their talking points among themselves before walking into the office of Assemblymember and 2004 UCLA alumnus Matt Dababneh to present their case.

Peeking through an open office door, you saw Assemblymember Reggie Jones-Sawyer holding court with a group of African-American and Latino students on the racial history of Little Rock Central High School, the site of forced school desegregation in Arkansas. At nearly the same time, another advocacy group was being greeted by Majority Leader Assemblymember Ian Calderon, eager to discuss the millennial caucus and how to get young people engaged in government.

Each of these meetings, part of the flurry of activity generated by the annual UC Day in Sacramento, provided an important touchstone as more than 50 students, faculty, staff and alumni split into groups in order to blanket the capitol and speak with every single legislator — or a designated staff member — representing the SoCal region. These volunteer advocates came to tell decision makers their personal stories of struggle and achievement, and how UC, and specifically UCLA, helped them. The overall message: Grow California together. 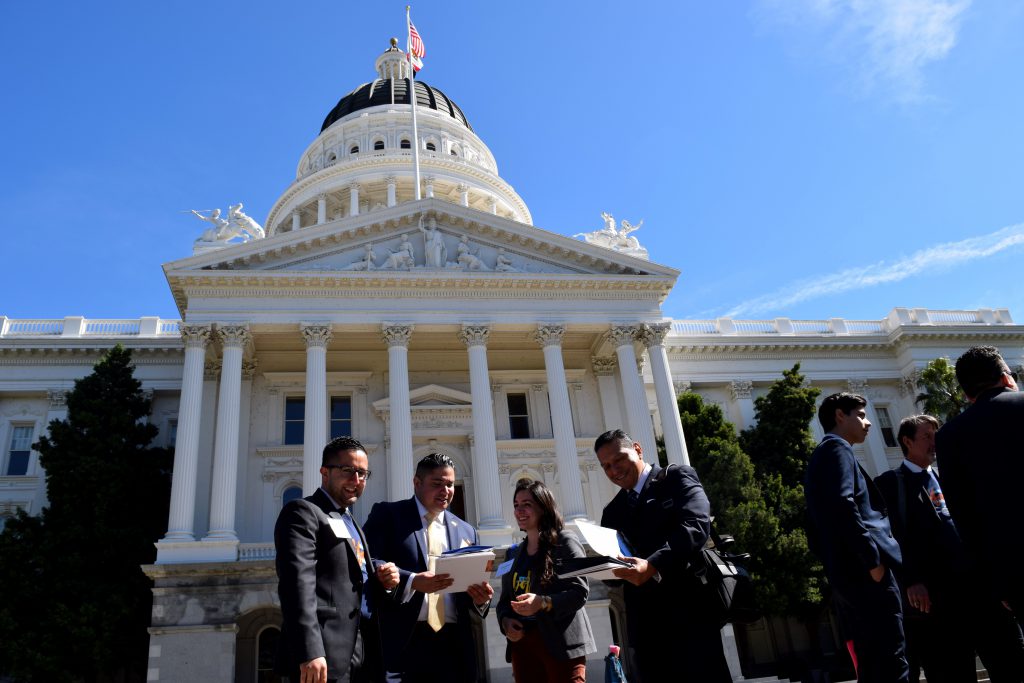 UCLA advocates visited the state capitol armed with information on the impact the university has on local districts and California as a whole.

“Today’s meetings are initial steps in building support and relationships on behalf of UCLA and the University of California,” Assistant Vice Chancellor Keith Parker told all the campus advocates. “As university delegates, we will need to be vigilant even after UC Day, following up with members and staff to reinforce the value and contributions of UCLA to California’s ongoing economic recovery and growth.”

Each Bruin was motivated to take on this task for different reasons.

“UCLA gave a lot to me when I was an undergrad, and part of me returning the favor is becoming an advocate,” said Richard Bacio, who is currently the city manager of Alhambra. “Back in 1979 when I graduated, more state dollars were going toward higher education, versus now, with the state drastically curtailing its investment. I think that funding needs to be increased to those levels again, and I’m here to hammer that message home to legislators so they are thinking more about higher education, especially the UC system, which is the flagship institution of the state, and, I think, the country.” 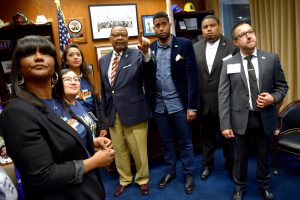 Student Robert Jackson, who was born in South Los Angeles to a single mother as the oldest of five children, decided to turn his life around after almost losing it to gun violence. Higher education has been a ladder of mobility for him, first going to Southwest Community College, then transferring to UCLA as an African American studies major. “I think it’s important that we have people from my district speak out and tell our stories about the conditions there,” Jackson said.

When getting down to specifics, advocates hit three main asking points in addition to urging legislators to support the 4 percent increase for UC that’s in Gov. Jerry Brown’s proposed budget:

As part of her story, alumna Kristina Bigdeli said it was invaluable to study the humanities and learn about the relationship between culture and history. She was a TA for three quarters while she earned an M.A. in Italian, so she was happy to stump for more graduate students. “More TAs mean smaller TA sessions, which means more one-on-one time for students trying to learn and navigate the campus. It is important for learning, inspiration, mentoring and the relationship-building that is needed when students ask for letters of recommendation, among other things. In summary, a TA can make or break academic access and careers.” 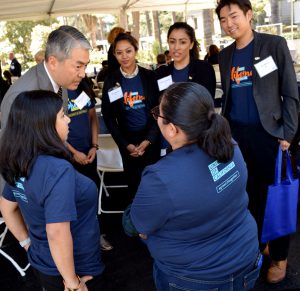 Assemblymember Al Muratsuchi greets UCLA advocates at lunch during a break in the day’s visits to legislators’ offices.

This year, advocates often found a kind ear and warm response during their visits.

“To me, education is a sacred thing,” said Jones-Sawyer, as he talked to a group of students that included Jackson and several others with similar stories of struggle. The legislator vowed to continue working toward increasing access for underrepresented students.

Assemblymember Patrick O’Donnell told UCLA delegates that he feels some progress has been made in recent years with regard to the state’s investment in higher education, and that he, in particular, is looking for creative ways to help. “I think everyone is in favor of opening up more slots for students, and even graduate students,” he added.

UCLA advocate David Gershwin, who graduated in 1991 with a political science degree, has spent much of his life in the political eye — he runs his own political consulting firm. And while this was the first time he has come to Sacramento on behalf of the UC, he said he hopes it won’t be the last.

“Being part of this larger, UC-wide advocacy effort for increased funding — for undergraduates, graduate students, faculty and staff — is certainly personal for me,” Gershwin said. “But it’s also essential that the UC system gets the funding it needs to be strong and vibrant for future generations. Many great business leaders, artists and intellectuals that we admire today got their start with a strong UC education. I know that my advocacy efforts — along with those of all the students, alumni and staff who made UC Day such a success — will have an impact for decades to come.”