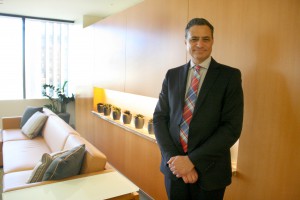 Vito Costanzo will take home the Advocate of the Year Award at UCLA Day in Downtown.

Yet this Thursday, Oct. 8, he will receive the UCLA Advocate of the Year award for his work lobbying local, state and federal officials on behalf of the university that has been intertwined with his family for years.

Costanzo was the oldest of six boys and the first in his family to attend UCLA. He graduated with a degree in economics. Two brothers would follow in footsteps. He also met his wife, Gabriela, there. His son, Daniel, is a current student.

“A lot of my family has attended UCLA,” Costanzo said with a chuckle.

It took a while for him to become as involved as he is today until about seven or eight years ago, when Costanzo was pulled into working with the UCLA Volunteer Center.

“Next thing you know I was a site leader with about 400 students, painting schools and doing things like that,” he said, noting he has worked every single UCLA Volunteer Day. “From there, it was just one thing after another.”

It seemed like each new UCLA-affiliated person Costanzo met would have a new group or effort he could join.

“So I did the training and then met with legislators in their field offices the first time,” Costanzo said. “I had never done any sort of advocacy or lobbying before. I’m not a political person. Politics, to me, doesn’t really get my attention. But I liked doing it. It was a way to have direct impact through sitting face-to-face with a legislator.”

Costanzo began advocating regularly for UCLA, especially to state legislators, shortly before the economy crashed in 2009.

“When the state budget crisis became more prominent, things heated up,” he said. “So I started doing more. I thought I could help out by talking to them about me. This is simply a need the university has for funds so it can do its work. It seems pretty straightforward to me that this is a necessary item the state should support irrespective of political issues. I felt like I had something to offer. That I could talk to them about it. I know what the university needs. I have a son there and am aware of what the university does.”

In the last year, Costanzo was part of a special group of parents who worked directly with UC President Janet Napolitano as the system advocated for more funding. He also traveled to the state capitol for UC Day in Sacramento, meeting with four different legislative offices.

“The university uses its resources efficiently,” he said. “It’s not wasting the funds that come from the public. There is kind of a multiplier effect of the money available to the university. It is not sucked into a hole and gone. It’s used so the students can be educated and trained to go out and do good in the world.”

And there is always room for more advocates.

“Don’t be worried about whether you are able to help, because you can,” Costanzo said. “The university needs help, and you’re able to give it. And that’s the only two things you really need to know.”