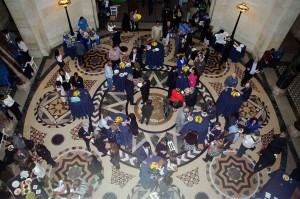 UCLA Day in Downtown LA is an opportunity for UCLA faculty, staff, students and supporters to inform local elected representatives and city and county officials about the many ways UCLA serves the community.

A UCLA delegation made up of more than 50 alumni, students, staff, community leaders and other friends will meet with members of the Los Angeles City Council and the Los Angeles County Board of Supervisors on Thursday to remind them of the tremendous impact UCLA has in the region.

“From the hundreds of community programs UCLA runs to the policy research done by its faculty, the services that the university provides are of critical benefit to the community,” said Chancellor Gene Block. “UCLA Day in Downtown LA is a chance for UCLA ambassadors to give local officials a firsthand account of the many ways the university serves Los Angeles.” 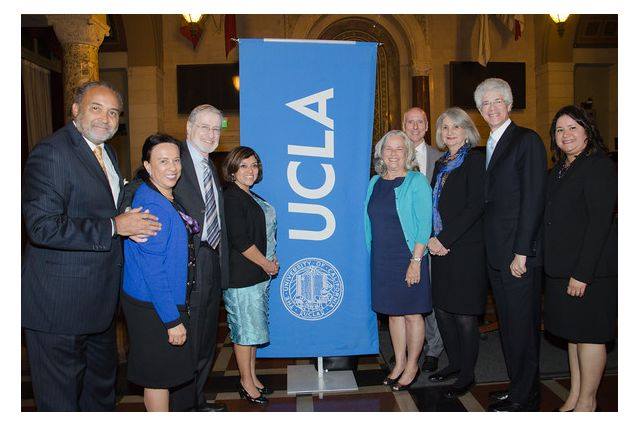 UCLA staff, faculty and supporters gathered last year with elected officials for a day of discussion and advocacy.

In its 12th year, UCLA Day in Downtown LA, organized by UCLA Government and Community Relations, is an annual tradition. It’s also an opportunity for organizers to shine a light on two UCLA programs that are making a difference across the Los Angeles community. This year, the Community Partners in Care — Health Neighborhood Initiative (CPIC) has been named the Landmark Program of the Year, and Visual and Performing Arts Education Program (VAPAE), has been named the Catalyst Program of the Year. The CPIC initiative, led by the David Geffen School of Medicine at UCLA, is working to address mental health and depression issues while VAPAE, run by the School of the Arts and Architecture, brings arts education to underserved schools.

At this year’s event, delegates will also emphasize UCLA’s service to vulnerable populations and its efforts to prevent individuals from becoming homeless, given local government officials’ stated goal to end homelessness.

Among these programs is the Happy Feet Clinic, which brings together UCLA undergraduates and medical students from the David Geffen School of Medicine at UCLA to help the homeless downtown, in Santa Monica and in South Los Angeles. At pop-up clinics in these locations, the homeless can receive a foot wash, followed by a foot exam to check for maladies ranging from fungal infections to diabetes.

“Our feet can tell us many different things that are wrong with our body, things that are often overlooked,” said Taylor Tabbut, a UCLA student and a delegate for the Happy Feet Clinic. “I’m very passionate about helping the homeless community and understanding what led them to the situation they found themselves in, while leading them to care.”

This will be the first time Tabbut will be a person-to-person advocate for UCLA, and she is looking forward to having the ear of local elected officials. “I’m hoping by the end of the day, they will understand the importance of our program and the passion we bring to these issues,” she added.

On the opposite end of the spectrum, husband and wife advocacy team Bonnie Faherty and Edward Feldman, who graduated from UCLA in 1975 and 1963, respectively, have participated in all 12 Downtown Days.

“When we’ve gone, we’ve always made the point that UCLA is not just Westwood. We are part of the community throughout Los Angeles and Southern California,” Feldman said. “It’s a matter of getting them to understand how involved we are and gaining their support.”

Other delegates noted that it was important to define the political relationship as going two ways.

“You can really talk about things that are dear to you that they aren’t aware of, or you can show them resources they can utilize,” said Xiutleth Santibañez, a UCLA alum who graduated in 2002 and lives in the shadow of rival USC. “You can ask them, ‘What would you like to get done? I know someone in the UCLA Volunteer Center who could help you with your cleanup day’ or ‘I know of a research expert for an upcoming policy initiative.’ Sometimes they tend to think USC is [the local resource] just down the street, but UCLA has more clinics and partnerships” throughout the L.A. area.

Santibañez also noted how important it was for delegates to draw attention to UCLA’s economic and research impact on the regions elected officials represent. “UCLA stops becoming an institution and starts becoming a solution in [their] area,” he added.

Terri Morgan, who directs mental health interventions for female veterans in transitional housing in Long Beach and San Pedro out of the UCLA Nathanson Family Resilience Center, noted that her work takes her well beyond Westwood.

“We’re actually going where the women veterans are and helping them make and maintain gains in their lives,” she said. “A lot of them have hit pretty low points when they get into transitional housing. They feel like they are still homeless. We help identify their strengths — they are already so resilient — and we help them tell their stories.”

From a government standpoint, homelessness is an issue that has come to a head, with the number of homeless rising, according to the latest county statistics. Los Angeles Mayor Eric Garcetti has already called for the city council to authorize an extra $100 million to address the issue.

To give their perspectives on how to meet the challenges of homelessness, a panel that will include 14th District Councilman José Huizar and Los Angeles County Homeless Initiative Director Phil Ansell will discuss the issue and the need for city and county collaboration during the evening portion of UCLA Day in Downtown LA. Chancellor Block will also deliver remarks at the top of the program. NBC4 anchor Conan Nolan will moderate the conversation.

“The current homeless crisis across Los Angeles County demands a coordinated response to overcome the multiple causes of homelessness and the fragmentation of current efforts,” Ansell said.

It’s those connections among the city, county and institutions like UCLA that will make a future imprint, delegates said.