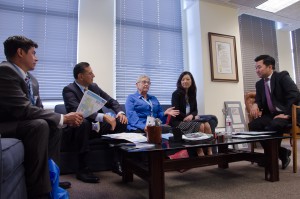 The journey for some UCLA advocates on Oct. 8 started as early as 9 a.m., meeting with City Council President Herb Wesson in his district office.

That meeting would set the stage for more than a dozen others at City Hall and the Hall of Administration later in the day for a 60-plus delegation of UCLA students, alumni, faculty, and staff, part of the annual UCLA Day in Downtown LA, an annual event.

In addition to reminding local elected officials of the number of alumni, staff, retirees, and students who live and contribute to the local economies in their districts, as well as the many UCLA programs that make an impact in their regions, this year’s meetings focused on addressing homelessness in Los Angeles. 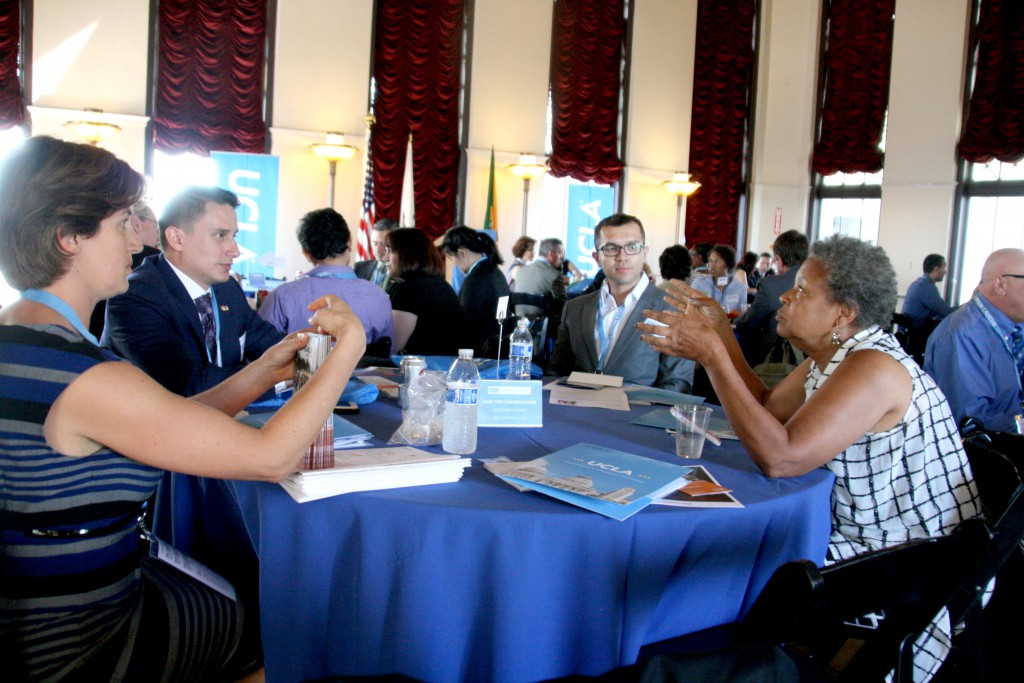 At 11 a.m., advocates were briefed by former City Councilman Ed Reyes, who gave important tips on how to have a successful meeting with elected officials and their staff members. He said it was important to identify the skillsets of the council or supervisor office and capture their imagination.

“You have to hustle,” he said. “This is a real issue and homelessness has to be addressed so bring your passion.”

United Way of Greater Los Angeles’ Vice President of Community Impact Christine Margiotta said it was important that the homeless population in Los Angeles stand up and be counted — as many as 40,000 people live on the streets of the county.

“The good news is we know there are solutions,” she said, noting how important housing is.

Margiotta said that it has been found to be 43 percent cheaper to house homeless individuals as opposed to not housing them. “Wraparound” efforts that address health and social issues are more economical than the costs for emergency shelters and emergency medical services that get utilized when someone does not have permanent shelter and support. She commended the group of advocates for meeting with the elected officials.

“They will be looking to you to help guide and shape what’s next,” she added.

The groups — formed with experienced UCLA advocates and representatives from more than 40 homeless programs — then broke out into their meetings, which took place all afternoon in the two municipal buildings. 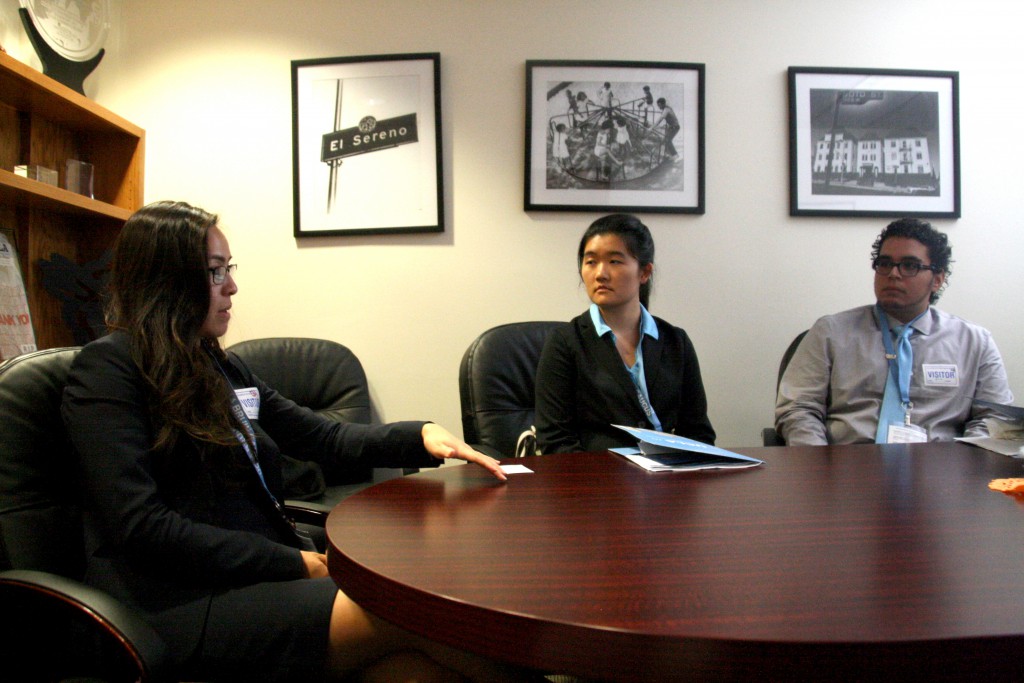 On the fourth floor, a group of four advocates met face-to-face with 14th District City Councilman José Huizar and two staff members. Huizar chairs the city’s homeless committee and has been a vocal supporter of the City’s allocating $100 million for the current homeless crisis.

Ami Nguyen, a UCLA School of Law alumna who works at Inner City Law Center, noted that she grew up in Section 8 housing herself. “They’re vulnerable,” she said. It’s up to her group to defend those who can’t defend themselves in malicious eviction cases.

“Eviction will happen, but it should be legal,” she added.

Current medical student Christina Kong represented IM HOME, a student-run program out of the UCLA Community Programs Office which works with families in transitional housing by providing mentoring and tutoring. She noted the propensity of mental health issues prevalent in homeless children and said it was important for that population to know there are people out in the community ready to help.

“They’re always on their feet,” he said, noting that cuts can exacerbate into extreme cases requiring amputation, and that diabetes is also something they look out for.

Huizar discussed his efforts concerning Skid Row, where he is working at enlisting more social workers, and come up with a system to better track homeless cases.

“We just want to help,” said advocate team leader Vito Costanzo, who added that there are likely a number of UCLA programs that could help partner with the city.

“I didn’t think if we would partner with UCLA on this that it would be from a medical perspective — I thought it would be more on the public policy side,” Huizar said. “There was a good connection to my district and they are working on issues I’m working on. 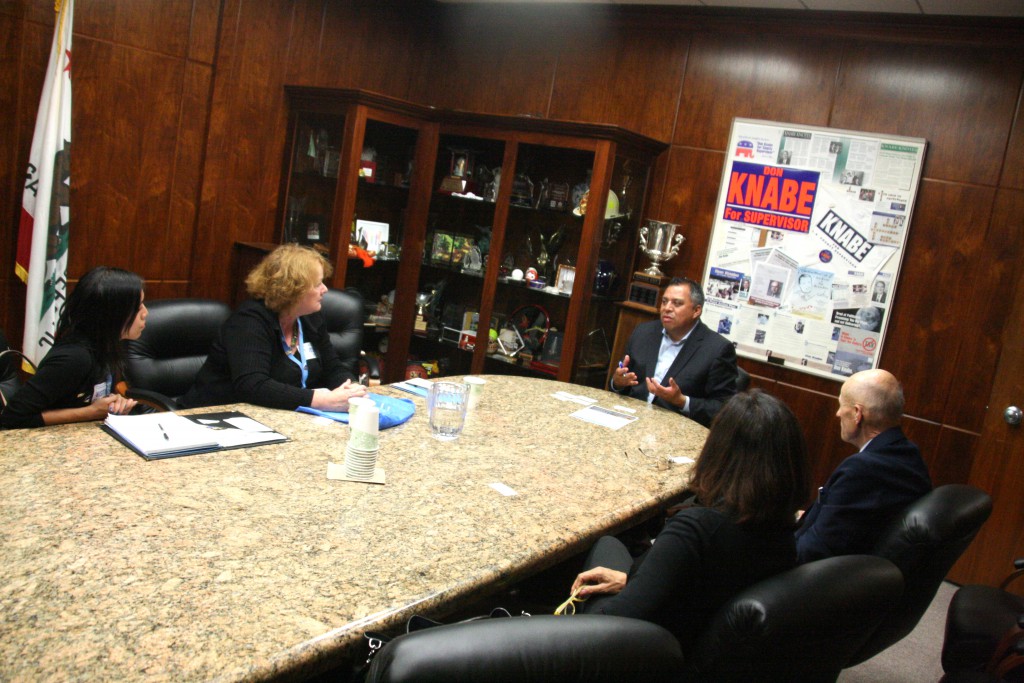 Knabe is retiring next year, but has had a long and strong record when it comes to veterans and homelessness — for example, Long Beach’s Villages at Cabrillo resides in his district.

“We’re really trying to get our arms around the situation,” Velasquez said, noting they were looking to partner more with the city and the mayor. The supervisors just approved $50 million to combat homelessness issues.

As the various program advocates spoke, it became clear to everyone in the room that “it really takes a village” to help tackle the issue of homelessness.

Fanny Hoang, representing UCLA Ties for Families, talked about her program that helps foster care youth through providing a “one-stop shop” for care and assistance.

After meeting with Velasquez for more than an hour, and representatives from 15th District Councilman Jose Buscaino’s office earlier in the day, the group of advocates headed out feeling that the meetings had been overall productive.

“For me, this is always rewarding because I learn so much,” advocate team leader William Younglove said, adding that they saw numerous opportunities for partnering UCLA with both offices.

“It was good to hear about what they do [at Knabe’s office], and when we met with Buscaino’s office, they were all excited about the possibilities of how we could work together,” said Laura Perry, representing the UCLA School of Nursing.

As the group left, Velasquez noted that efforts like UCLA Day in Downtown LA really do make an impact.

“I think you need to publicize what you do and it brings awareness to lots of officials as to what those UCLA contributions are,” he said. “And if we don’t ever hear from you, we might not ever really know.”